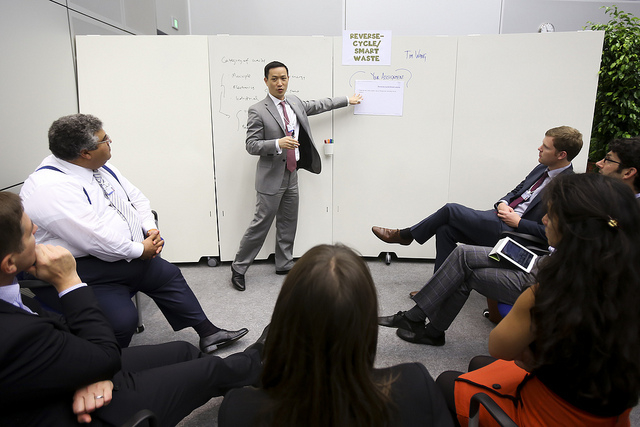 This article is part of our special report The Circular Economy.

SPECIAL REPORT / Transforming waste into resources and reducing the environmental impact of economic growth are priorities for Europe. An EU package on circular economy has been long-awaited.

The concept of a circular economy is making headway, and according to the European Environment Agency, 2014 will be the year of waste management.  The European Commission will present an ambitious statement on the next steps for all EU member states on July 1. The plan will be written by François-Michel Lambert, French Green MEP and President of the Institute for Circular Economy. He spoke to EURACTIV France and said “we’ll no longer say waste, but resource instead!”

The idea of a circular economy aims to limit the consumption and waste of raw materials as well as non-renewable energy sources in the production of goods and services. Key to this concept: waste is seen as an important resource to be fed back into the human economy. A circular economy would mark the end of the direct relationship between economic growth and waste production. Each European citizen currently produces 444 kg of household waste per year. France’s new Minister for the Environment, Ségolène Royal, is fond of the idea and wants to include it in a new French law on energy transition, which will be presented this summer.

The goal of minimising waste stems from a simple observation: raw materials are limited. Zinc and lead resources will be depleted within the next 15 years if current consumption levels continue. “Rare earth” metals are affected by the rarity of the resource and the financial and environmental costs of their extraction.

Oil and gas resources are depleting and plastics produced from hydrocarbons are often falsely thought to be infinite.

Optimising resources does not just mean recycling. “There will always be waste. ‘Zero waste’ is impossible,” said François-Michel Lambert.

“Recycling is one way of optimising waste, but there is always a material loss in the process. In the best cases, 95% of the material is preserved. This is not a problem if the recycling process is long. However, if it is short – on a monthly basis for example – the material will rapidly diminish,” stated the French MEP.

Therefore, the longevity and efficiency of manufactured products are important. Car-pooling is an example of effective resource optimisation.

In order to develop a circular economy, it is essential to innovate in areas of taxation, accounting and regulation.

For example, public market rules are not adapted to a circular economy model, seeing as the dominant criteria for selection remains cost price. “Public procurement tenders are a disaster for those who propose innovative solutions. They have no chance of being selected, because the stress is always on price criteria,” stated the MEP.

Taxation of circular economy projects also poses problem, as they do not benefit from reduced VAT. According to Lambert, “there must be a fiscal differentiation”.

Accountability is also an obstacle for an effective circular economy. “Accounting must be innovated in order to promote a new business model,” he continued.

The price of a circular economy package

Many large EU countries have already adopted framework laws on circular economy, such as Germany, Belgium, the Netherlands and the UK. However, France has fallen behind.

The Commission will present a circular economy package on 1 July in order to speed up and systemise the growing movement for such a model. A statement from the EU on the common objectives has been long-awaited. According to a source in the Commission, the package was originally planned for June, but greater momentum has resulted in delays. Its main objective will still be to reduce and recycle waste.

Targets for waste legislation will probably be reviewed, as well as reforming the three existing directives on waste, landfills and packaging.

Changes to current recycling targets are expected. At the moment, approximately 20% of waste is recycled in the EU, with the objective of reaching 50% by 2020. This is expected to be raised to 80% and a 20% limit on incinerated waste will also be outlined. If these targets are met, sending waste to landfill could be de facto forbidden.

Big differences exist across the EU, especially between southern and northern member states. The latest members to join the EU are typically behind schedule in terms of waste management and recycling. The Commission has taken Bulgaria to the European Court of Justice over 113 illegal landfills, which are still in operation, despite numerous injunctions.

Food packaging, austere buildings and the creation of green jobs will also feature in the upcoming package. If the circular economy package is proposed by the Barroso Commission II, it will be closely monitored by the next executive, which is likely to prioritise energy transition and employment.