DR Congo’s impasse between an unplanned urbanisation of slum expansion and a dystopian dream world of Dubai-inspired gated compounds is on display at a show in Brussels – the former colonial master of what is now one of the world’s poorest countries.

The exhibition – by photographer Sammy Baloji and anthropologist Filip De Boeck – documents the current state of Kinshasa’s anarchic urban growth, juxtaposed with the past of ‘black-exclusion’ zones, and a future of private-investor luxury developments, sealed off from the capital and self-sufficient in water and electricity.

The show consists of photographs, a 70-minute documentary  and a maquette of the last planned zone of Kinshasa. Tellingly, it is dated from the late 1960s/early 1970s and now gathers dust in a corridor of the municipal house in Nsele.

The future of African cities – and their rapid expansion – was a key theme of this year’s EU Development Days conference in Brussels.

The exhibition, at the Wiels gallery and titled: “Urban Now: City Life in Congo”, makes no direct mention of Belgium’s horrific colonisation of DR Congo, which saw between 8-13 million people die under King Leopold II’s rule from 1895 and 1908.

Nor does it dwell on the disastrous 22-year military rule of President Joseph-Desire Mobutu, whose dictatorship oversaw mass plundering of state resources and human rights abuses, whilst Mobutu himself hired Concorde to fly from his personal palace in the jungle at Gbadolite.

DR Congo ranks as the 10th poorest country in the world, according to the 2015 United Nations Development Index. More than 3 million people have been displaced due to civil war since 2009.

Post-Mobutu (who temporarily changed the country’s name to Zaire) regional wars in 1997 and then 1998-2002 led to the deaths of another 4-5 million people.

The EU has given DR Congo some €100m in humanitarian assistance since 2014, including €37m in 2016 alone. Last year, it also gave €2m towards housing refugees from neighbouring Central African Republic in DR Congo.

Instead, the most telling single image in the exhibition shows the former headquarters of the country’s telecommunications ministry, a post-war modernist building from 1959. 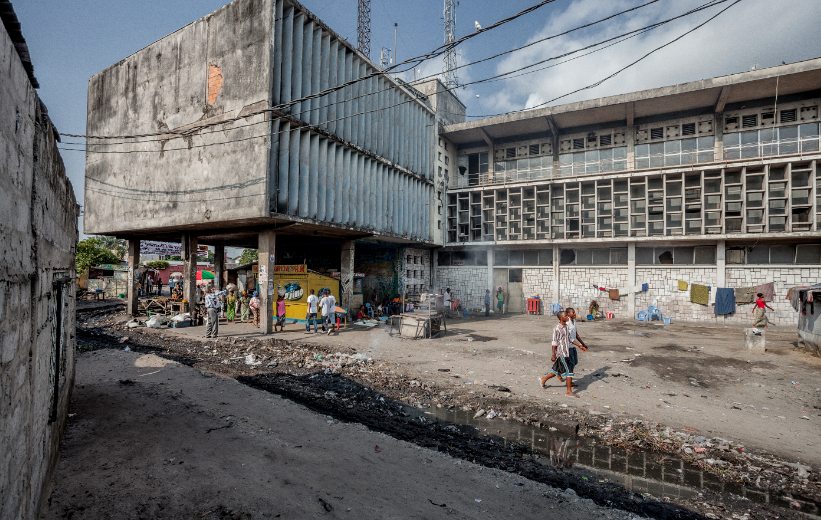 The former head office of the DR Congo Office of Post and Telecommunications – now squatted by some 300 unpaid workers in lieu of salary. [Sammy Baloji/Wiels]

It is now occupied by some 300 people, many of them working for the Office Congolais de Poste et Telecommunication (OCPT), who are allowed to squat in the building in lieu of unpaid salaries and pensions.

Another room shows photographs of the unofficial gravediggers of Kintambo cemetery in Kinshasa.

The cemetery was declared full and closed, and abandoned by the authorities in the late 1980s.

However, now the slum dwellers of  Camp Luka live there, among the dead, and the newly-buried, as corpses continue to be sent there.

Alongside a promotional video for the new ‘satellite city’, Cite du Fleuve, plays on a continual loop. Started in 2008, by private developers, it is built on two artificial islands in the Malebo pool, and promises “10,000 luxury apartments, 10,000 offices, a marina, schools, cinemas, restaurants, and conference space”.

With its own water supply and electricity supply, it promises buyers “a luxurious lifestyle and secure land titles”, with Dubai and the Gulf States explicitly stated as the role model.

Meanwhile, the emotional heart of the exhibition is a 70-minute, virtually one-take film of a man who has single-handedly built as 12 storey tower.

It is still unfinished and uninhabited, without electricity, or an elevator, and was constructed without the aid of architects or seemingly engineers.

Humanitarian aid is not keeping pace with needs on the ground, partly due to the affects of El Nino and climate change in eastern and southern Africa, according to a new report from World Vision – and as a result already malnutrioned children are going hungry.

At first, the doctor – as he is referred to only in the film – guides us round what he hopes will be the ground floor ‘medical facility’ before taking the camera crew up an increasingly claustrophobic and Kafka-esque series of tiled or bare concrete and windowless rooms, which – apparently – will become offices for consultants and air-traffic control.

It slowly becomes apparent that his monstrous edifice, begun in 2003 and still unfinished, is the work of a deeply mentally disturbed – if charming – fantastist.

It will clearly never be occupied, is clearly a death trap, yet is his pride and joy. Ignoring the poverty around him, and the imported luxury fantasies of the overseas developers, he has – at least – built something.

What that something is, and what is says about DR Congo’s lack of infrastructure, resources or planning laws, is a lesson of sorts.