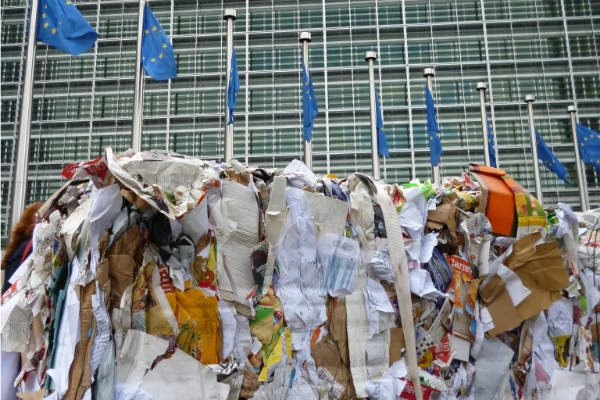 Parliamentarians on the environment (Envi) committee and the European Commission’s head of unit for waste, Julio Garcia Burgues, will thrash out issues with the proposal, which changes the point at which waste is considered a secondary raw material and no longer waste.

The Confederation of European Paper Industries (Cepi) has lobbied against the proposal hard, and the campaign has gathered steam.

Last month, Cepi made a last-ditch attempt to have the proposal rejected by member state negotiators in the European Council, organising a protest in which they placed large paper bales outside of the Commission with banners declaring that the rules would bring the “end of recycling” in the EU.

The protest was held the day before the Council vote on the so-called end-of-waste criteria. However, the proposal did not receive a qualified majority of votes against, at least 260, to prevent it from moving to the Parliament for further debate.

But it did convince British liberal MEP Chris Davies and other lawmakers that more inspection was required. Last month, Davies sought backing from colleagues to sign an objection to the Commission’s proposal, opening up a parliamentary debate over the end-of-waste rules.

“The Council is divided, and the Commission is giving a strong indication that it wishes it had never introduced the proposal in the first place,” Davies said in an email, seen by EURACTIV.

“Commission officials have told my office that they hadn’t appreciated the full implications of a proposal that was intended to promote recycling.”

Addressing Envi committee colleagues, Davies added: “Whether you support the proposal or not I hope you agree that it is important that Envi debates it.  We need to hear the arguments on both sides.”

The new Commission rules for paper move the recycling and end-of-waste point from its current location at the paper mill to an earlier stage in its collection.

The Commission wants the draft new rules to increase the quality and availability of paper for recycling.

In emailed comments, the Commission’s environment spokesperson, Joseph Hennon, backed the criteria for end-of-waste, saying that they derived from an in-depth study by the EU’s Joint Research Centre (JRC) and in consultation with industry and NGOs.

“The adoption of EoW [end-of-waste] criteria for paper should: 1) contribute to increasing separate collection of paper in the EU; 2) ensure that recovered paper is of higher quality and can be used a secondary material industrial processes in line with our resource efficiency objectives; 3) reduce administrative costs by removing the burdens inherent to the waste regime,” he told EURACTIV.

If a load is defined as waste, it has to comply with EU waste transportation criteria. “If it is not waste you don’t. This is the reduction of administrative burdens,” said Unico van Kooten, Europe affairs director at the Dutch Waste Management Association.

But Cepi claims the new end-of-waste point would land mills with huge costs as they would have to further purify the secondary raw material, which would contain impurities 15,000 times higher than at the moment, to prepare the paper for sale.

Jori Ringman, Cepi’s recycling and environment director, told EURACTIV: “CEPI cannot see what is the environmental or any other benefit justifying that the current status of recycling where purity level of parts per million is already achieved is pushed to another point upstream where the output will have 15,000-fold increase in impurities of up to 1.5%.”

Ringman fired a warning shot at policymakers in a press release accompanying the protest, saying that European mills would have to be shut down as they could not compete with recyclers outside of the European Union, which would not have to comply with such stringent rules.

“With this proposal, the European Commission will be exporting pollution to the poor and importing unemployment to Europe”, Ringman said.

The irony of Cepi’s criticism was that it had initially supported the proposal only to change position in the run up to the Council vote.

This caused a few raised eyebrows amongst waste management authorities.

Nadine De Greef, the secretary general of the European Federation of Waste Management and Environmental Services (Fead), told EURACTIV: “Cepi was one of the first to advocate for end-of-waste. I could not understand why Cepi changed its position.”

Sources say that Cepi also lobbied the Commission enterprise directorate, who then pressured the environment directorate to include multi-material packaging in the proposal.

This would greatly increase the amount of impurities, such as glues and plastics, in the raw paper, De Greef said.

“They wanted the last minute inclusion for multi-layer papers and tetra packs. How this goes with higher-quality recycling we do not know,” she said.

But to Ringman, such a claim was “confusing two things”, non-paper elements in packaging and real impurities.

Non-paper elements used in packaging, such as layers of aluminum or polymers in drinks cartons, can be removed easily at specialised processing plants and therefore do not compromise the purity of the raw paper or add significantly to the costs, Ringman says.

Real impurities brought in at the segregation or collection stage of recycling – anything from old shoes to batteries and broken umbrellas – are the problem. “In the worst case this can damage the equipment and in any case cannot be recycled at a paper mill,” Ringman said.

Paper industries, such as those of the Cepi group, do not want materials containing paper to be considered post-waste before those impurities have been removed.

The paper recycling specialist added that “multi-material packaging would not be an issue if the Commission did not decide to push the ‘recycling’ point to an early step in the collection – if the recycling and end-of-waste point would stay at the paper mill pulper (where it de facto is today), there would be absolutely no concern (to member states or stakeholders) of knowing that also multi-material packaging can be managed without any concern”.

To van Kooten the inclusion of multi-material packaging in EU paper recycling rules – a less palatable proposal for the EU Council of Ministers – and the protest the day before the Council vote signal one thing.

“The process or protest Cepi is running is fake,” van Kooten said. He suggested that Cepi’s real intention was to simply to get the proposal dropped completely.

“The statements CEPI are making now in front of the European Parliament on end of waste for paper are misguiding, confusing and different from where they came from. COM [Commission] officials as well as JRC staffers close on the matter can confirm this. We have a good guess what drives them now but it is better that MEPS find out themselves.”

Van Kooten added that the Commission was mounting a strong defence of the proposal, including the economic benefits derived from cutting back national barriers to the shipment of waste.

De Greef believes another issue may be at hand. “Mills receive subsidies if they take waste,” and not secondary raw materials, she said.

The European Recovered Paper Council (ERPC) released a report on 28 August saying that European paper recycling rates had risen by some 30% over the past 20 years, to 71.7% in 2012. This made paper the most recycled material in Europe.

Paper fibre was reused on average 3.5 times a year in Europe compared to 2.4 times in the rest of the world, the report said.

EU paper consumption dropped by 13% to the 1998 level but that the amount of recycled paper was 1.5 times higher.

These stats make happy ready for the paper recycling industry. But the figures are less impressive for other materials. Overall, Europe still landfilled and incinerated 60% of its waste, according to a recent study by the environmental NGO Friends of the Earth Europe.