EU citizens use an average of 198 plastic bags per year. [Shutterstock]

Single-use plastic bags could soon become a thing of the past in European supermarkets. On Tuesday (28 April), MEPs approved the final version of a text drastically limiting the use of plastic bags in EU member states.

These bags, which are often only used once, are a scourge on the environment, take several centuries to degrade and are particularly harmful to marine ecosystems.

Around eight billion of these bags end up polluting the European environment every year, according to estimates.

The new law requires member states to progressively reduce their use of plastic bags, with an initial threshold of 90 bags per person per year by 2019, followed by 40 bags in 2025. Certain countries like Hungary, Portugal and Poland and heavy plastic bag users and will have to make radical changes in order to comply with these limits.

At the other end of the scale, some EU member states like Finland and Luxembourg already find themselves on the right side of the future limits. With an average consumption of 79 plastic bags per person per year, France is already well below the first threshold. 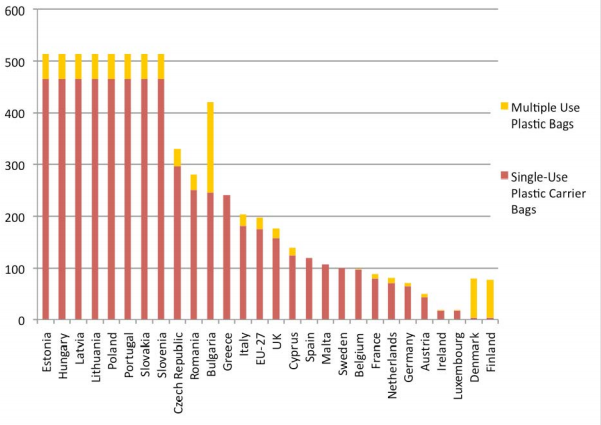 Plastic bag use in the EU

“This legislation will create a genuine win-win situation,” said the Danish rapporteur Margrete Auken, from the Group of the Greens. “We’re talking about an immense environmental problem. Billions of plastic bags end up directly in nature as untreated waste. It damages nature, harms fish, birds, and we have to get to grips with this,” she added.

In 2010, each EU citizen used an average of 198 plastic bags, and without regulation, the number was rising.

This binding regulation leaves the individual states free to choose their preferred approach to reducing plastic bag use. One popular method is to introduce a compulsory charge for single-use plastic bags.

Some countries have already successfully implemented a nation-wide charge for plastic bags. But other top performers, like Finland, have no legislation on the matter. The sale of paper bags in almost all of the country’s supermarkets has rendered single-use plastic bags all but obsolete, and Finnish citizens use an average of only 4 plastic bags per year.

Member states have until 2019 to enact the new law, but “they can choose to act faster if they want”, said French Green MEP Michèle Rivasi. France has already adopted a national ban on the distribution of single-use plastic bags, which will enter into force on 1 January 2016.

The dangers of “ersatz” plastic bags

While the adoption of the law has been broadly welcomed by MEPs, the future of bio-degradable plastic bags is still uncertain.

Supporters of this material insist it is a viable biodegradable alternative, but opponents say the plastic does not in fact degrade, but breaks up into toxic micro particles.

Michèle Rivasi said “Some producers are making biodegradable bags that leave behind plastic micro particles that we will then find in oysters, for example.”

The new law requires the European Commission to investigate the environmental impact of these bio-degradable plastics, in order to decide whether to label them as plastic, bio-degradable or compostable in 2017.

"This is an emergency: plastic pollutes, plastic kills. In the Pacific, a continent of plastic has formed, covering an area of 3.5 million Km2. In the European Union, around 100 billion plastic bags are put on the market each year. Many end up in the seas or on the coast. In France alone an estimated 122 million plastic bags pollute 5,000 kilometres of coast!" said French Socialist MEP Gilles Pargneaux, a member of the Environment Committee.

The ECR Group's environment spokesperson Julie Girling said "We want action to cut down on plastic bag use, but we also need laws that we know will work. Instead, MEPs have plucked ideas out of the air without any understanding of what the costs and implications could be, or knowing whether they can be delivered. We cannot call for EU law to meet principles of better regulation one day, and then throw those principles out of the window the next. The objectives of this law are sound. We need to reduce plastic bag use, but we want clear rules that will work, not overly prescriptive burdens that even the European Commission fears could be unworkable."

"Plastic bags are a real environmental disaster. They are among the most abundant items of rubbish collected by the volunteers that clean up coasts all over the world and they cause virtually irreversible pollution to our planet. This legislation is a big step towards greater respect for our planet and respect for the generations to come," said Marc Tarabella, the head of the Belgian Socialist Party delegation.

EPP Group Shadow Rapporteur György Hölvényi commented: "Today's decision reflects a hard-earned compromise. As a result, the EU is getting rid of a bad habit and is taking an important step towards a cleaner Europe."

The European Commission released the proposals to curb the use of thin plastic bags in November 2013, arguing that they cause more damage to the environment than other forms of carrier bag.

The European Parliament voted in April 2014 in favour of the legislation, which will curb the use of thin plastic bags in the EU by at least 80% by 2019.

The draft laws call for EU countries to first reduce their consumption of the bags by 50% by 2017, compared to 2010 figures.

The new law will apply to lightweight plastic bags that are thinner than 50 microns, which are deemed the most polluting form of bag. They are the type of bag most prone to littering and can easily break apart, causing damage to the environment and ocean wildlife, in particular.

The stomachs of 94% of all birds in the North Sea area contain plastic, according to European Commission statistics.