Europe warned on ‘low carbon leakage’ if it falters on renewables 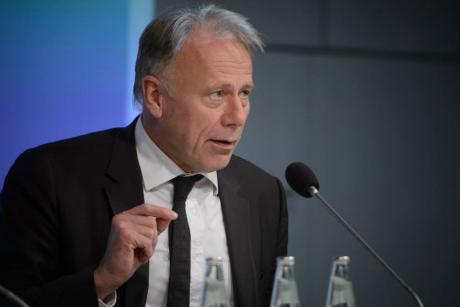 Former German environment minister Jürgen Trittin is warning the EU against self-destructive behaviour with regard to 2030 climate and energy targets. [Stephan Röhl]

Ahead of an EU summit which is expected to agree on energy and climate goals for 2030, a new study by the European Climate Foundation is calling for binding targets to avoid low-carbon technologies from moving outside of Europe and putting 600,000 jobs at risk. EURACTIV Germany reports.

Klaus Töpfer and Jürgen Trittin, both former environment ministers of Germany, are alarmed that the EU is frittering away its leading role in environmental protection.

The EU’s 28 heads of state and government should not give in to the industry lobby at their 23-24 October summit, when leaders will determine the bloc’s energy and climate for 2030, Töpfer and Trittin said.

Energy-intensive industries say that competition from countries without strict regulations on carbon dioxide emissions could force them to relocate abroad, an unproved phenomenon known as “carbon leakage”.

But “in reality there is no carbon leakage” Trittin said. “The danger of low carbon leakage is much more real,” he added in reference to the production of low-carbon technologies such as solar panels, which are now manufactured chiefly in China.

“The EU must offer the renewable energy sector reliable framework conditions,” he said in reference to stop-and-go support policies for renewables, which have depressed the European market.

According to Trittin, it is unacceptable that EU member states drive new industries away at a moment when they are just becoming more competitive on the global market and are gaining ground in a growing number of world regions.

“This behaviour is putting jobs and growth on the line. That is something that neither Germany nor Europe can afford,” Trittin said on Monday (20 October). The former minister spoke in Berlin at a presentation of a report developed by the European Climate Foundation’s (ECF) in cooperation with the consulting firm E&Y.

With regard to renewable energies, e-mobility, energy storage and intelligent networking, the EU economy is currently still a leader in global markets. But the study describes an imminent threat of migration in these sectors – to China, Japan, the United States and countless developing and newly industrialised countries.

The ECF report estimates that key industries including photovoltaic, wind power and biofuel will each make up a market volume of around €100 billion. In Europe, these sectors employ more than 600,000 people.

“We can only prevent this migration if EU member states set ambitious and binding goals – not only in expanding renewable energy sources and reduction of greenhouse gases, but also in energy efficiency”, Trittin said.

The framework proposed by the European Commission for European climate and energy policy until 2030 includes a binding target to reduce greenhouse gas emissions by 40%, a target to improve energy efficiency by 30% and an EU-wide target for a 27% energy share from renewable sources.

But Poland is one of the main members stalling negotiations. Great Britain and Cyprus are against any form of compulsory energy efficiency goal.

Meanwhile Germany, Denmark and Sweden are calling for all three targets to be binding and for the renewables and energy efficiency targets to be set at 30%.

Trittin slammed the German government for not acting as a good role model. “The fact that current Environment Minister Barbara Hendricks is already saying Germany will miss its greenhouse gas emissions targets, only reducing them by around 33% instead of the 40% pledged, resembles a disclaimer. That is almost an invitation to those blocking the measure in Europe to stand their ground,” he said.

The German government must understand that binding climate targets are an enormous chance for domestic industry. “Here, the government should push the structurally conservative camps in our society to their own success,” Trittin stressed.

Reform in the coal sector?

“We need to further develop and extend use of future technologies in Europe,” Töpfer added.

“If Germany hopes to reach its own climate targets and continue to play a leading role in international climate policy, we must drastically reduce emissions in the energy sector alongside an ambitious policy for efficiency,” he said.

“But to do this, we will not be able to avoid regulatory requirements on coal-generated power,” explained Töpfer, who was executive director at the UN Environment Programme (UNEP) for eight years.

Up until now, no climate policy decision has every been made without being initially questioned over economic concerns, Töpfer indicated. But in hindsight, even critics are happy that these measures were put in place and that ambitious political decisions were made, he said.

The result of the EU summit this week will have far-reaching effects on the upcoming UN climate talks. World leaders plan to settle on a new global climate protection agreement by the end of 2015 in Paris. It is then expected to take effect in 2020, putting all nations on a path toward ambitious climate protection.