Facing up to the sustainable consumption conundrum 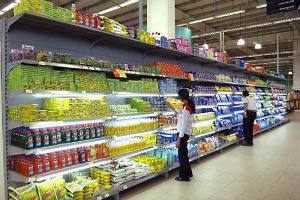 This article is part of our special report Products for a greener planet.

SPECIAL REPORT / The earth is running out of natural resources like land, water and minerals so quickly that if nothing is done, some predictions say that by 2030 humankind will need the equivalent of two planets to sustain our current lifestyle.

Those chilling figures come from a famous World Wildlife Fund ‘Living Planet’ report in 2008, but what exactly can we do to reduce our environmental impact – which has got worse since then – and how should we go about doing it?

People “desperately” need a means of putting the environmental impact of their products into context, according to Martin Barrow, a senior consultant at the UK’s Carbon Trust, which provides companies with certification for their labelling schemes.

“By giving them more and more information they [can] know what the impact of their decisions are,” he said after a workshop on sustainable consumption organised by EURACTIV on 13 June. “Then we’re into the area of behaviour change,” he added.

Studies undertaken by the Carbon Trust showed that consumers would change their behaviour if they were given simple information about a product’s environmental impact on a packet.

With numbers and colours, the Trust found that people could build a “mental map” in a short period of time and establish rules for their consumption.

Such an increased and improved information flow is “the basic way” of addressing sustainable consumption issues, said Ulrike Sapiro, the environmental sustainability director for Coca-Cola Europe, after the same meeting.

“The philosophy goes ‘Let’s just have more labels’,” she told EURACTIV. “Well do labels actually stick? Does this help? Do consumers get the information they need to make informed choices.”

“We as a company, Coca-Cola, stand on the position that we doubt [and] are sceptical  [that the idea of] ‘labels and more labels’ would work,” she said.

Through its personal carbon allowance project, Coca-Cola had come to a view that consumers trusted institutions, government, and businesses to give them a harmonised message about the environmental impact of the products they consumed, she said.

“The trick that we have to find as society – businesses and stakeholders together – is [to] transpose those messages,” she added. “Quick wins” that gave consumers “the feeling that they have made a difference in their choices,” were the way forward.

Some see it as a way of shifting the burden of climate mitigation from richer producers in the developed world who profit most from their goods production, to poorer and less powerful consumers, who may have little choice in the products that they buy.

Preventing environmental damage in the first place is seen as a preferable strategy to asking consumers to mitigate it after the fact.

However, Dutch MEP Bas Eickhout (Greens) told EURACTIV that addressing sustainable consumption was “as crucial as [addressing] the production side.”

“They need to go hand-in-hand but it’s far more difficult,” he said. “How do you tell people what to consume? You cannot really forbid things.”

He called for better environmental information to be made available to the public, to encourage a change away from unsustainable consumption patterns such as meat-eating.

For Franz Fiala, a spokesman for the European consumer rights group ANEC, the fundamental problem was the lack of a “roadmap” or “master plan” for addressing the issue.

“We have pieces of that but no overall strategy,” he told EURACTIV. “Any overall strategy would have to accomplish fundamental changes to the way we live, how we produce, how we consume. It’s quite clear that we have to consume less.”

But reducing consumption had to be done according to principles of global social equity – and quickly, he said.

“We have learned that we are moving towards [economic] collapse,” he explained. “It will happen in the second half of the 21st century. So we need drastic change and that means that we cannot leave this to the market.”

The debate will continue.

EURACTIV held a stakeholder workshop on sustainable consumption on 6 June. Below is a video highlight of what the main speakers said:

The mainstay of current EU efforts to reduce the environmental impact of consumer goods is the 2005 eco-design requirements for energy-using products (EuP) directive, which sets requirements on energy use for popular products that consume energy, such as hairdryers, computers, fridges or office equipment (EURACTIV LinksDossier).

In addition, a range of existing instruments and policy areas address the broader issue of sustainable consumption and production, including 'thematic strategies' on use of natural resources and waste as well as the Integrated Product Policy (IPP).

Environmental groups have criticised this policy framework for being too fragmented and lacking sufficiently stringent regulations.

0 responses to “Facing up to the sustainable consumption conundrum”