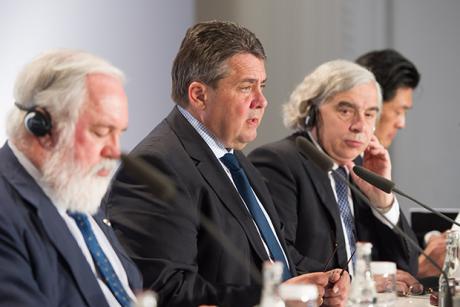 At the start of this week, Economic Affairs Minister Gabriel negotiated with his counterparts from other G7 states over securing a long-term sustainable energy supply. [BMWi/ Maurice Weiss]

Prospects for achieving a global climate deal by the end of this year are good, according to Germany’s Economic Affairs Minister Sigmar Gabriel who said he had never seen so much agreement among the G7 states. EURACTIV Germany reports.

“We must ensure that the energy supply is secured sustainably worldwide,” Gabriel said on Tuesday at the closing of the G7 energy ministers’ meeting in Hamburg.

“What we have in common is that all the states are pursuing the same target, namely concluding a successful international climate protection agreement by the end of the year in Paris,” he said.

The meeting’s participants had agreed that all the G7 countries’ initiatives should aim towards a global climate treaty.

“I’ve never experienced so much agreement when it comes to the targets of the G7 countries,” Gabriel, a Social Democrat, added.

US Energy Minister Ernest Moniz pointed to the rising costs of climate change, which he said all participants were aware of. “I think we are going in the right direction,” he said, referring to the UN negotiations in Paris at the end of the year.

“The prospects are remarkably better than six or seven months ago,” he pointed out.

The climate treaty is meant to ensure that global warming is restricted to two degrees above pre-industrial times. A failed initial attempt in Copenhagen in 2009 was partly due to the United States and China, the two biggest producers of greenhouse gases.

Germany, which currently holds the G7 presidency, also hopes to shift climate policy into the focus of the G7 meeting of heads of state and government in June in Elmau.

In contrast to their environmental policy counterparts, energy ministers are generally considered to be more sceptical of the climate agreement.

The conclusion of the two-day agenda in Hamburg resulted in a joint communiqué from the ministers. They indicated that “deep cuts in greenhouse gas emissions” are still needed. The countries emphasised the “urgency of a consequent energy transition to further decouple economic growth from carbon emissions”.

But Jan Kowalzig, a climate analyst at Oxfam Germany, argued the meeting was a wasted opportunity for climate protection.

“It is not enough to simply determine that harmful greenhouse gases must be cut worldwide and the expansion of renewable energy sources should be pushed forward. We need a clear commitment from the big industrial nations to completely abandon fossil fuels, especially environmentally hazardous coal.”

Meanwhile, the internationally negotiated target to limit global warming to under two degrees Celsius is unattainable, as is limiting climate change to a controllable level, Kowalzig said.

“The effects of climate change already threaten the livelihoods of people in the poorest countries. Droughts reduce harvests, storms and flooding cause considerable damage.”

Germany’s energy transition to climate friendly green energy is met with scepticism in some other countries.

In the meeting’s concluding report, the ministers emphasised the importance of liquid gas for security of supply. In Europe this is considered a chance to become less energy dependent on Russia in the medium-term.

Russian shipments are particularly crucial for Ukraine, which G7 Energy Ministers expressed their full support for. One feels obliged to support Ukraine in its aim to promote better energy security, they explained.

Within the framework of Germany' G7 presidency for 2015, the government has put climate change and climate protection in the spotlight of the G7 agenda. G7 energy ministers also tackled the issue at their meeting in Hamburg (11-12 May).

In preparation for the G7 summit (7-8 July 2015 at Elmau Castle) the governments are currently discussing long-term, global climate protection, a possible G7 initiative on climate risk insurance in poor countries as well as activities to mobilise more support and more investment in climate friendly energies and adaptation to climate changes in developing countries.

The G7 summit is considered one of the most important meetings on the way to Paris, where a comprehensive agreement on climate change is planned to be concluded at the end of the year.