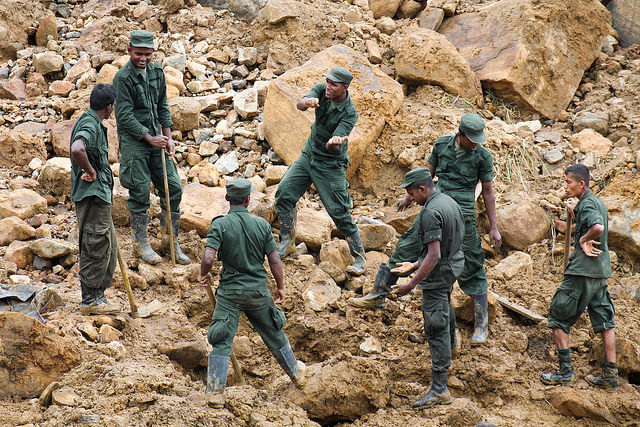 Climate change was blamed for landslides in Sri Lanka. [Vikalpa/Flickr]

But the potential health benefits of fighting climate change mean that tackling the problem presents one of the greatest opportunities to improve health this century, the 2015 Lancet Commission said.

“No doctor would consider a series of annual case discussions and aspirations adequate, yet this is exactly how the global response to climate change is proceeding,” he added.

>>Read: The NGO health perspective at the UN Climate Summit

The European Commission has said that climate action would bring benefits of €38 billion a year in 2050 through reduced mortality caused by air pollution.

The report said a strong international agreement was needed to move the world to a low carbon economy. The pact must make sure that human health is protected, particularly in the poorest countries, which will be the ones hardest hit by climate change.

World leaders will meet in Paris this November to try and secure a legally binding deal to keep global warming below two degrees.

Génon Jensen, executive director of NGO, the Health and Environment Alliance, said, “The health benefits from climate action should become a much more prominent argument for an ambitious climate agreement.

“With this new report, heads of state and governments participating in the Paris talks have the evidence base at hand to support an ambitious agreement, a swifter move away from fossil fuels and a decarbonisation path that will boost the health of their citizens.”

“Climate change has the potential to reverse the health gains from economic development that have been made in recent decades, said Commission co-chair Professor Anthony Costello.

Euracoal, the European Association for Coal and Lignite, sent EURACTIV the following statement.

"Euracoal views this report by the Lancet Commission on Health and Climate Change as part of a well-co?ordinated effort by rich foundations to secure political influence. The positive health impacts of fossil fuel use have helped propel average life expectancy to 80 years across OECD countries, but if a report on this achievement were published by a group sponsored by the coal industry, then it would be quickly dismissed as lobbying.

"Funding for this Lancet Commission comes from the ClimateWorks Foundation and the European Climate Foundation, among others. The Commission’s messages should be understood in the context of the strong political positions of these funders. The blurring of the boundary between science and politics is a dangerous development, especially as the media is quick to publish the conclusions and policy prescriptions of sponsored reports without questioning the impartiality of the interest groups involved.

"On the serious issue of air pollution, Europe can breathe more easily today than in the days when emissions from our factories were largely uncontrolled. Legislation since the 1950s and the use of pollution control equipment has resulted in vast improvements – an 80% reduction in sulphur emissions since 1990, for example. Today, the hidden killer in our cities is pollution from diesel-engined vehicles, so we are surprised that the Lancet Commission highlights pollution from coal use.

"The use of diesel has grown because climate action policies favour higher efficiency diesel engines. The Lancet Commission cautiously prefers gas to coal because it gives precedence to the potential risks of climate change over all other risks, even known risks. Euracoal warns against political ideologies which promise great leaps forward, but ignore the smaller steps that can be taken to improve the well-being of citizens. One of those smaller steps is to replace the older coal-fired power plants in Eastern and South Eastern Europe with modern clean coal plants, like those in Denmark.

"Finally, we note that it is in the Norwegian national interest to promote gas use, perhaps explaining why the Norwegian Agency for Development Cooperation is also a sponsor of the report."

Climate change is expected to cause 250,000 additional deaths per year between 2030 and 2050, affecting the poorest countries with weak health care systems.

World leaders will meet in Paris this November to try and secure a legally binding deal to keep global warming below two degrees.

Today's report in The Lancet, a leading medical journal, gives leaders the evidence they need to support an ambitious agreement that will also benefit public health.