COP21 set two global warming targets. The ETS is one way the EU hopes to meet them. [James Crisp/Flickr]

EXCLUSIVE / The EU’s Emissions Trading System – currently being reviewed – could be revised again in 2025 to bring it in line with stronger international climate targets called for by the Paris Agreement on global warming, under proposals being scrutinised by leading MEPs today (26 April).

If ultimately backed by lawmakers, it opens up the possibility of increasing the ambition of the bloc’s carbon market system, a cornerstone of its fight against climate change, five years ahead of schedule.

This would allow a quicker response to expected increased climate change commitments from world leaders in 2023, at the first ‘global stocktake’ after the UN Climate Change Conference in Paris, COP21, last December.

The ETS is the world’s biggest scheme for trading emissions allowances. Regulated businesses measure and report their carbon emissions, handing in one allowance for each tonne they release.

Best performing companies are eligible for free carbon allowances, which they can sell, and member states auction off allowances to the other companies, which brings governments revenue.

In Paris, governments struck a historic deal to limit global warming to two degrees above pre-industrial levels, with an aspirational target of 1.5 degrees. They also agreed to report on their progress every five years, with a view to increasing the ambition of their climate efforts in a bid to make the goals.

The first global stocktake on the Paris Agreement is planned for 2023. The proposed 2025 date would allow the stocktake to feed into changes to the ETS, such as withdrawing free carbon allowances to speed up decarbonisation.

But campaigners called for any review to take place before the stocktake to set an example to other countries and incentivise increased climate action on their part, which is likely to be necessary to hit both the two and 1.5 degree targets.

“Starting a review in 2025 would institutionalise a betrayal of the Paris Agreement and firmly close the door on the 1.5 degree target and on the future for billions of lives,” said Sanjeev Kumar, of NGO The Change Partnership.

The European Commission’s proposal for ETS reform – which could prove to be MEPs’ preferred option –  calls for the current review schedule of 2030 to be maintained. The ETS ‘phase’ is planned to last from 2021-2030.

2030 is the target year for the bloc’s 2030 climate and energy targets. EU leaders have agreed to an EU-wide greenhouse gas reduction of at least 40% compared to 1990 levels, which was the basis for its position at the COP21.

The Commission plans to reduce the amount of free carbon allowances by 2.2% a year until 2030 to hit the 40% goal. This is called the Linear Reduction Factor (LRF).

Leaked documents obtained by euractiv.com give MEPs leading the bill the option of sticking with the executive’s proposal, or demanding the executive assesses the LRF and the amount auctioned by member states to industry.

The European Commission may then submit a new legislative proposal to increase the LRF, and increase the auction share, to in effect reduce the amount of CO2 in the atmosphere.

Supporters of the plan argue that it will give the EU a mechanism to increase the ambition of the push to cap global warming, which the bloc called for in Paris. 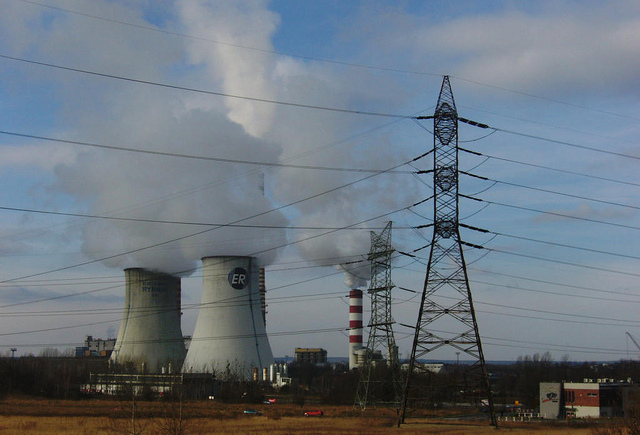 Poorer EU countries will be given profits from the sale of carbon emissions allowances to modernise their energy infrastructure, in return for backing a binding 40% greenhouse gas reduction target last October.

The ETS, as it stands, has been bedeviled by low carbon prices. The market was also flooded with a huge surplus of carbon allowances, which strengthened arguments for a reform of the system.

The European Commission put forward a reform bill in July. Ian Duncan MEP is leading the European Parliament’s report on the proposal, which must ultimately be agreed by both the Parliament and Council of Ministers before it can become law.

The initiative is one of 12 proposals that Duncan has put before the MEPs leading the bill on behalf of their political groups –  ‘the shadow rapporteurs’.

In a break from usual practice – widely believed to be a first in the Parliament –  Scottish Conservative Duncan has given options for each of the 12 points, and has asked for feedback from the group leaders.

This consultative approach appears designed to ensure the bill passes through Parliament and follows a series of behind-closed door informal hearings with industry and other groups. The shadows are expected to reply to Duncan in ten days.

Other options on the table include a toughening of language around carbon leakage. Carbon leakage describes companies moving production out of the EU to countries with less strict climate policies.

The Commission’s original proposal states that member states “should” adopt financial measures in favour of industries exposed to a “genuine risk of carbon leakage due to significant indirect costs”.

Those indirect costs can include the steep electricity prices paid by, for example, the crisis-hit steel industry and the aluminium industry.

Carbon-intensive electricity generators simply pass on their carbon costs to consumers. If that consumer uses a lot of electricity, as steel does, it increases the risk of carbon leakage.

The UK and Germany have adopted measures to offset this. Duncan has given MEPs the choice as to whether such measures should be harmonised across the EU, or simply left to member states.

Steelmakers are concerned that the ETS reform will ultimately slash their free carbon allowances, but Duncan has called for the industry to be helped.

Britain should abolish its carbon floor price to help the hard-hit steel industry, the lawmaker shepherding a reform of the EU Emissions Trading System (ETS) through parliament said on Tuesday (5 April).

MEPs are also asked if they back increasing the threshold for small emitters from 25,000 tonnes of carbon to 50,000. Under the current regime, institutions such as hospitals, military bases or smaller companies found themselves on the hook for their carbon emissions.

Duncan also suggests shortening the time between revisions of the list of 10% best performing companies in different sectors, which qualify for 100% free carbon allocations.

The Commission proposal backs a five year period between list revisions, but Duncan has given the other MEPs the option of supporting shortening it to two years. This would make it more responsive to real time industrial data.

Other options put forward in the paper include reform of the Cross Sectoral Correction Factor (CSCF). This is a mechanism used when free allowances on the market are used up, and results in a haircut across free and auctioned allowances.

The CSCF could be tiered, with industries best able to bear the cost, in one option or member states would pay for the shortfall, rather than industry, by sacrificing 1% of the auction share to create more free allowances.

There are two other options that would, if adopted, cost member states revenue from their carbon auctions.

The European Commission is pushing for any unallocated allowances, caused for example by company closures, and 250 million allowances from the Market Stability Reserve to be earmarked for new companies.

The Market Stability Reserve is a mechanism to issue or remove allowances from the market to react to low prices or excess allowances.

Duncan’s consultation paper suggests removing the 250 million allowances from the auction share rather than the reserve.

The Commission has said it wants 400 million of the free allowances pot, and 50 million from the reserve, to support innovation and industry research.

Duncan gives his shadows the options of backing the executive, as he does for all the points.

But he also suggests that splitting the 400 million allowances between the auction share and free allowances share could be an option.

The EU's Emissions Trading System is the world’s biggest scheme for trading emissions allowances. Regulated businesses measure and report their carbon emissions, handing in one allowance for each tonne they release. Companies can trade allowances as an incentive for them to reduce their emissions. Countries can also sell permits to the market.

The European Commission has proposed a series of reforms to the ETS.

Pollution credits were grossly over allocated by several countries during the 2005 initial implementation phase of the ETS, forcing down carbon prices and undermining the scheme's credibility, which prompted the EU to toughen up the system. Carbon prices have since remained stubbornly low, at about €7.4 a tonne.