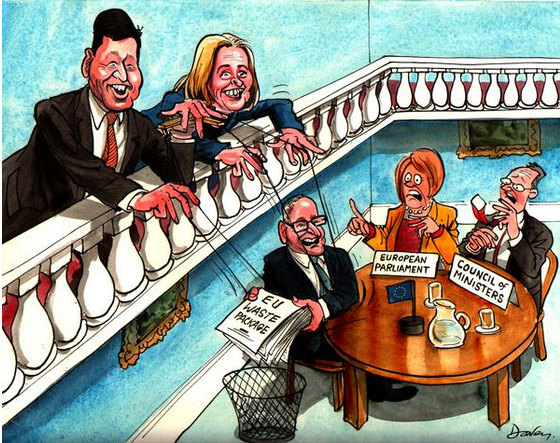 EU foreign and European affairs ministers said they do not want the European Commission to axe its proposed Circular Economy package but still backed a decision on Tuesday (10 February) to do just that.

Meeting in Brussels on Tuesday (10 February), the ministers from the 28 EU member states rubberstamped Council conclusions backing the executive’s drive to cut red tape, which includes provisions to roll back proposed environmental legislation.

Environmental campaigners Monday night wrote to Commission President Jean-Claude Juncker in a last ditch effort to save the waste, recycling, landfill and incineration laws from the axe.

But, as EURACTIV reported last month and was confirmed again today, the executive plans to ditch the package and re-table it, despite the objections of MEPs and EU ministers.

Tuesday’s meeting was the likely last chance for the Council to argue against the withdrawal of the legislation, which was proposed under the Barroso Commission. Barroso’s administration claimed it would create €600 billion net savings, two million jobs and deliver 1% GDP growth.

Latvia’s Foreign Minister Edgars Rink?vi?s told reporters that Commission Vice-President Frans Timmermans, in charge of better regulation, and who announced the withdrawal of the package in December, was at the meeting. Latvia holds the rotating Presidency of the EU.

“We really expect the Commission will not withdraw its proposals on the waste management directive,” he said in reference to the package.

In a “broad debate” with foreign ministers, the Commission got all the “necessary messages”. Pressed on what form a compromise on the decision could take, Rink?vi?s said it was best to ask the Commission that question. “We agreed to work further and try to find the best solution possible,” he said.

The Council Presidency has just said very clearly that it hopes @TimmermansEU will NOT withdraw the #waste package http://t.co/mTLjv9cwAm

Despite Rink?vi?s’ comments and ministers’ support for the package, the General Affairs Council conclusions don’t mention it specifically.

Naming the Circular Economy could have opened a Pandora’s Box, EU sources said. That could have prevented agreement between ministers on the conclusions, which focused on the fight against terrorism, preparations for the March European Council and the Latvian Presidency work programme.

Instead the draft conclusions agreed to “take note” of the list of pending bills to be modified or ditched, as part of the executive’s 2015 Commission work programme.

“Thoroughly reviewing the relevance of pending proposals is in line with the general objective of better regulation, despite possible divergences of view on specific legislative files,” read the conclusions, which call for a similar approach in future annual programmes.

In what could be interpreted as a rebuke of sorts, the conclusions recall the Council’s “role and the role of its Presidency in setting the agenda and organising legislative work in the Council.” The Commission should also “engage in timely consultations with the co-legislators […], in order to ensure that strategic priorities are respected.”

The Commission told EURACTIV that the conclusions were a “clear endorsement of its programme.”

Sources told EURACTIV that the General Affairs Council recognised that the Commission work programme was the responsibility of the executive. It was not the Council’s work programme, they said.

Council working parties were already discussing what would be changed in the future replacement proposal, according to sources.

There was also recognition that environment ministers had lodged their objections last year. In December, Italy’s Environment Minister Gian Luca Galletti said the move sent a “negative signal” about Europe’s commitment to climate change. It was also at odds with the EU’s push for growth, he said.

Environment ministers wrote to the Commission, including Germany as well as Italy, which has spent much of its six months holding the rotating Presidency of the EU working on the waste package. But there was no formal message from the Environment Council to the Commission.

And MEPs in Strasbourg failed to secure a joint resolution of the full Parliament against the move, although a majority of them voted for individual amendments calling for the package to be saved.

Legal procedures to officially dump the legislation should be completed in the next couple of months, the Commission told EURACTIV on 22 January. The final decision has been taken and nothing could be foreseen that would change the executive’s mind at this stage, EU sources said at the time.

Commission First Vice-President Frans Timmermans told MEPs in December that he would consult with the Council of Ministers and the European Parliament before formalising the axing of the six bills on waste, packaging, landfill, end of life vehicles, batteries and accumulators, and waste electronic equipment.

It would be re-tabled in 2015 and be “more ambitious”, he promised, as he announced a cull of pending legislation as part of a drive to cut red tape.

He later said the new bill would include laws to prevent waste being created in the first place. This can be achieved by “completing the circle”.

This would involve legislating to encourage the use of materials that create less waste and are easy to recycle, he said.

But critics are suspicious of the motivation behind the withdrawal, as it was on a hit list of laws that lobby organisation BusinessEurope wanted killed off by the executive.

The executive had given the impression of being “impervious to the feedback that it said it wanted to listen to,” said European Environmental Bureau Secretary General Jeremy Wates in his letter to the Commission.

He rejected Timmermans’ claims that the package needed to be withdrawn. A separate law addressing product design could have been proposed while the waste package continued through the legislative process, he said.

Withdrawing the package “would send a clear signal to Europe’s citizens that this Commission […] has embarked on an ideological crusade where there is no longer room for evidence, arguments and facts.”

Many stakeholders, including NGOs and many industry voices, had called for the package to be saved, Wates added.

Environmental campaigners last week demanded the Commission provide any analysis it has that justifies its decision to ditch the Circular Economy package of recycling, waste and landfill rules.

No such evidence has been given since Timmermans announced the laws would be axed in December, said four non-governmental organisations (NGOs) in a letter officially applying for the release of internal documents.