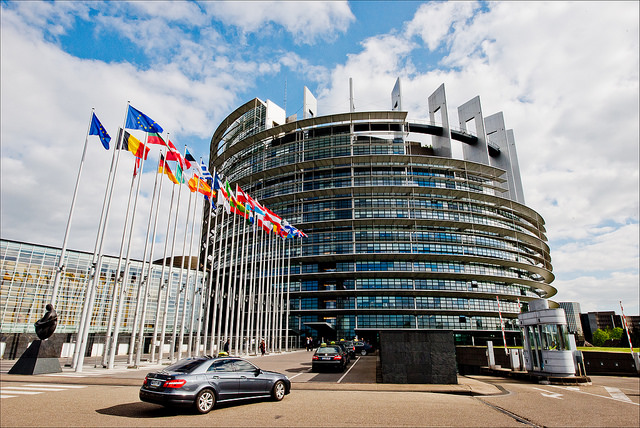 MEPs were unable to secure a joint resolution calling for the environmental laws to be saved, but 60% of them voted in favour of similar proposals. [European Parliament/Flickr]

The European Parliament’s failure to pass a joint resolution against the Commission’s ditching of green legislation does not mean it backs the decision, MEPs and campaigners have said.

Cracks between different political groups meant the Parliament could not pass a single proposal. But more than 60% of MEPs voted for separate resolutions, all of which supported the environmental bills, they said.

Yesterday (15 January) in Strasbourg, the Parliament voted on a series of resolutions put forward by the Socialists & Democrats, the liberals (ALDE), Greens, GUE/NGL, and Europe of Freedom and Direct Democracy groups.

All called for pending EU laws on waste and recycling, known as the Circular Economy package, to be spared the axe from the Commission’s work programme for 2015.

The resolutions also pushed for guarantees over the future of expanded air pollution rules in revisions to the National Emission Ceilings (NEC) Directive. There are concerns that they could be delayed.

Each group acted individually, after the European People’s Party (EPP) and European Conservatives and Reformists (ECR) groups pulled out of talks for a joint resolution. They also put forward their own proposals.

None of the individual proposals were able to secure a majority. Liberals, Socialists and Greens did club together to vote for single amendments criticising the withdrawal of the bills. Each of the three groups’ amendments on waste and air quality received narrow majorities of between 327 and 332 votes.

Most EPP and ECR MEPs voted against the amendments, backing their own resolutions instead. Those avoided open criticism of the Commission’s plans, Bearder said.

While that can be interpreted as backing for the Commission’s drive to cut red tape from those groups, campaigners point to the fact that five out of the seven groups in the Parliament wanted the laws saved.

Catherine Bearder, lead negotiator for the ALDE group on the new air quality limits, said a clear majority of MEPs had shown they were against weakening the pending laws.

“Unfortunately, what could have been a strong, united position from the European Parliament has collapsed due to narrow political interests,” she said. “Conservative MEPs have utterly failed to stand up for measures to improve air quality and resource-efficiency.”

Petr Hlobil, current chair of the Green 10 group of leading environmental NGOs in Brussels, said: “The erosion of political support for the Juncker Commission over plans to withdraw draft legislation to clean up air and reduce waste should trigger a radical rethink.

“Most groups in the Parliament effectively told the Commission this week that it cannot backtrack on the environment and the Commission would be well advised to heed this advice”.

Commission First Vice-President Frans Timmermans, tasked to cut red tape and deliver “better regulation”, announced in December that the Circular Economy package would be replaced with “more ambitious” legislation in 2015.

What that actually means in practice remains unclear. But some MEPs and campaigners fear it will spell the end for the law.

Those fears are heightened because the Circular Economy package was on a hit list of environmental and employment laws sent to the Commission by trade association BusinessEurope.

The NEC bill would be changed to make it more likely to be approved by the Council of Ministers and Parliament, Timmermans said in December.

Timmermans yesterday reassured MEPs that the changes, which would tailor the bill to the 2030 Climate and Energy targets agreed by EU leaders in October, would be made as it continued to pass through the legislative process.

UK Conservative MEP Julie Girling said on Wednesday that Timmermans and Environment Commissioner Karmenu Vella had told her in private that the air quality rules were safe.

Girling said, “I have been assured by the Commissioner that the legislative process will continue as planned and I will be sticking to my timetable as rapporteur [lead MEP on the bill]

“Of course we fully support the principle of better regulation and we are right behind Mr Timmerman’s in his quest to weed out legislation that is ineffectual, intractable or just plain bad. However, the air quality package is none of those things. It would have been wrong to scrap it wholesale.”

EURACTIV understands that the Commission will make the changes when the bill goes to trilogue. Trilogues are meetings between Council and Parliament, with the Commission present, that aim to get joint approval of a final compromise text.

Timmermans had promised to consult both Parliament and the Council of Ministers over the changes to the environmental laws.

“If Juncker is serious about listening to the Parliament, as he said he was, he needs to play ball and pursue negotiations in both of these areas.”

The Council sent a strong signal of its support for the package shortly after the cull of pending legislation was announced.

The Circular Economy package was intended to increase recycling levels and tighten rules on incineration and landfill. It consists of six bills on waste, packaging, landfill, end of life vehicles, batteries and accumulators, and waste electronic equipment.

Proposals on the list include a circular economy package, air quality legislation and a draft directive on maternity leave, which has been stuck in the Council of Ministers, the institution representing the 28 EU member states.

The Commission's "better regulation" drive has caused unease with environmental organisations, trade unions and consumer groups, which have called on the Commission not to drop the proposed gender and environmental laws.

Responding to those calls, Timmermans announced that the Commission would ditch the Circular Economy package to replace it with “more ambitious” legislation in 2015, and change pending air-pollution rules.