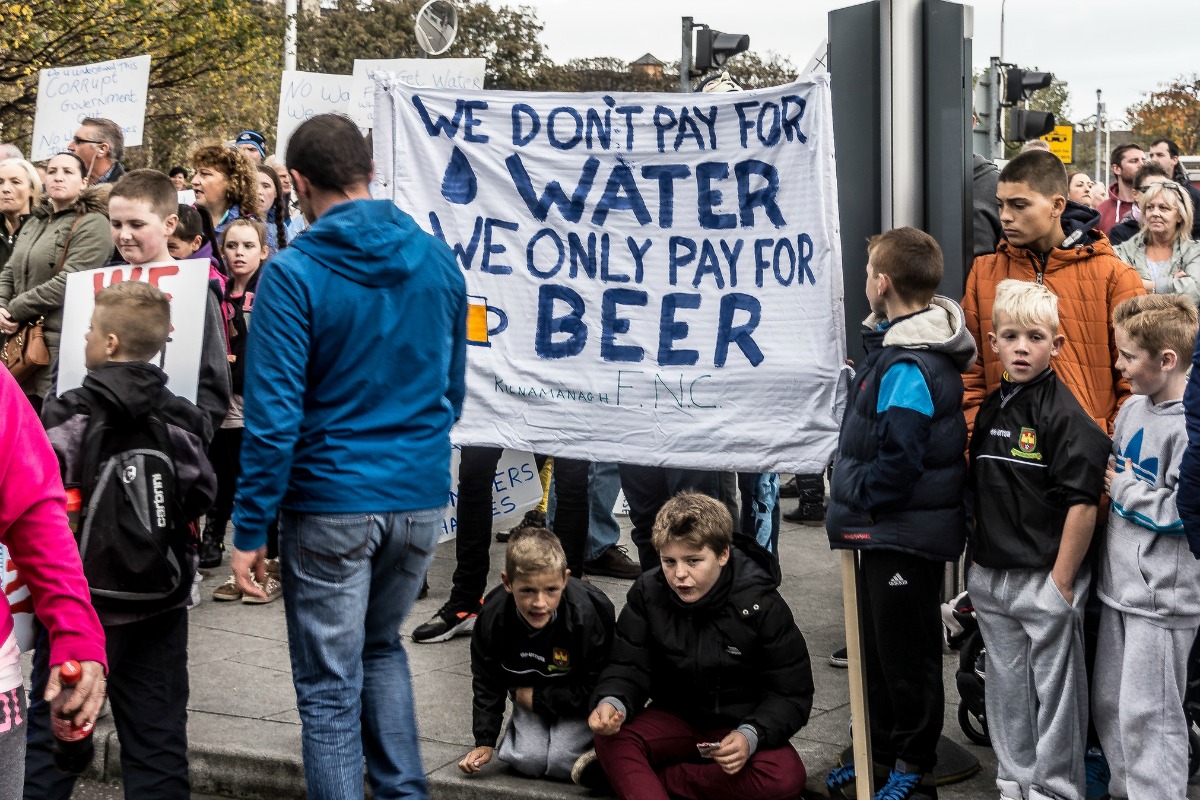 The first bills for water from the new Irish Water utility are due next month after the government introduced the charges as a condition of its international financial bailout.

Irish police could not provide an estimate on numbers, but organisers put the crowd at 80,000. State broadcaster RTE cited observers as saying between 30,000 and 40,000 attended.

Dublin capped water charges at 160 euros for single households and 260 euros for others, and abandoned plans for pay-as-you-use meters.

But the Right2Water campaign, an umbrella organisation of dozens of local opposition groups that organised Saturday’s protest, said the issue was not going away.

“We have one objective and that’s to seek a repudiation of the domestic water charges legislation,” organiser Brendan Ogle said.

“We’re going to ensure this is the major political issue in the next general election,” he told AFP.

The government has insisted that the pricing changes they introduced last year provided “certainty, clarity and affordability” for charges.

Irish Water says about two thirds of those who are liable to pay the new charges have now registered with the utility, which represents 990,000 customers out of an estimated customer base of 1.5 million.

Under the old system, water was paid for through general taxation, and services were operated by local authorities.

The crowd jeered and yelled “traitors”, and chanted “Enda Kenny, not a penny” and “no way, we won’t pay”.

Roy Murphy from Clondalkin in Dublin was carrying a “we reject water charges” poster.

“This is going to kill the government at the next general election. How exactly do they think they’ve made it affordable?” he told AFP.

Another protester, Deirdre from Dublin, who asked not to use her surname, said the issue had become bigger than just water taxes.

“We’re already paying water taxes through general taxation. But it’s not just this. It’s the pension cuts, the property tax,” she said.

“I’m lucky enough to still be working. There hasn’t been any salary increases in six years, but yet there’s been lots of new taxes,” she said.

Addressing the crowds, Socialist Party lawmaker Ruth Coppinger called for a mass campaign of non-payment when the first bills arrive.

“In 10 days’ time, every family in this country will receive a bill. To pay or not to pay, that will be the question,” she said.

“The only way we can secure the abolition of water charges is by building mass non-payment.”

Ireland must hold a general election by next April, and the government parties of Fine Gael and Labour are hoping economic recovery will boost their popularity.

Recent opinion polls show a resurgence in support for both government parties.

However, left-wing lawmaker Joan Collins, who was taking part in Saturday’s protest, insisted people were seeking an alternative.

“They are absolutely disgusted with this government, which is carrying on the austerity measures,” she told AFP.

“The polls go up and down but the main date will be the election and that’ll be the decider.”

The Irish government unveiled plans in November to introduce a charge on tap water, which had been free until then.

Governments across Europe have traditionally provided large subsidies in order to ensure that all citizens have access to affordable drinking water.

But analysts say this has prevented change in wasteful behaviour, and has held back much-needed investments in water distribution networks.

In some parts of Ireland, the water treatment infrastructure is so worn out that drinking water has to be boiled before it can be consumed safely.

The EU's Water Framework Directive, adopted in 2000, calls on EU countries to introduce water-pricing policies by 2010, in order to provide an incentive for users to use water more efficiently.

However, it is unclear whether this has in fact resulted in any change in national policies, according to the European Environment Agency (EEA).

Putting a price on water is seen as essential to encouraging savings but EU policymakers are cautious not to spark a social backlash with a one-size-fits-all solution.

Raising money from water charges was a condition imposed on Ireland by the EU-IMF-ECB troika as part of the country's bailout in 2010 following the country's economic collapse.

The Irish water charges are the final piece of a €30 billion austerity drive that has cut spending by almost 20% of annual output since 2008. However, they have provoked the biggest response of any measure.

6 responses to “Thousands march in Dublin against Irish water charges”