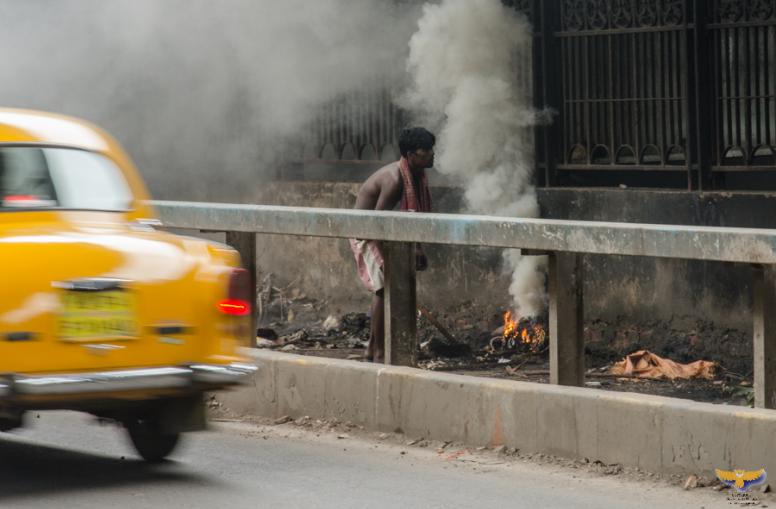 A man in india burns waste by the side of the road. [Berhard Huber/Flickr]

Growing amounts of waste put an increasing burden on the climate, particularly in newly industrialising countries, where greenhouse gas emissions are rising, according to a new study for the German environment agency. euractiv.de reports

While Germany has been able to reduce harmful emissions through waste processing, the waste management industry in many developing and newly industrialising countries, as well as in numerous OECD countries and the United States, could do much more to contribute to climate protection.

“Among the results for OECD countries, the United States, India and Egypt, the status quo shows that methane emissions related to waste dumping are among the main causes of greenhouse gas pollution,” the authors write.

Only a few OECD countries, such as Japan, who do not or only rarely dump (organic) waste are able to ease the burden. The more recycling and waste processing takes place, the more significantly positive the country’s climate footprint.

In the study, researchers made a detailed comparison of climate protection potential for waste management industries in India, Egypt and the United States. In addition, they examined various OECD and EU countries. Results showed that there is an urgent need for support of an integrated circular economy in many countries to cut greenhouse gas emissions by increasing recycling.

Developing countries and newly industrialising countries, the study showed, especially lack an organised recycling system. In Egypt and India, waste of any kind largely ends up on uncategorised dumps without equipment to catch seepage or gas pollution. There, waste is often collected, sorted and recycled by private people and organisations that sort out trash and search for recyclables under difficult conditions.

In India, whose 1.2 billion residents produce an estimated 243 million tonnes in total waste, the informal sector is active on two levels.

On the one hand there are door-to-door collections where residents can sell their recyclables, such as newspapers, cans, glass, plastic bags and old textiles. On the other, so-called “waste pickers” sort recyclables from the streets and dumps.

All in all, around 80% of the country’s trash, ends up at the dump without being organised and emits nearly 55 million tonnes of CO2.

If countries like India were to sort and efficiently recycle their waste the could contribute considerably to climate protection.

Here, the authors point out that political and legal regulation via waste management legislation or similar measures are essential.

These countries must be sure to take their informal structures into account when they implement such laws, warned Günter Deboust, an expert on the waste management industry and deputy department head of infrastructure and enterprises at the Institute for Applied Ecology.

“There, many people who do a large part of the recycling work today are unfortunately doing manual labour and often under poor working conditions. It is urgently necessary to keep their jobs intact and simultaneously improve labour and health protection.”

In addition, the negative effects of waste processing on the environment should be minimised.

For several years, Germany has served as a positive example, whose waste management industry has transformed into being more of a climate protector.

As a result, the waste management industry was able to decrease emissions that are harmful to the climate by around 56 million tonnes per year between 1990 and 2006. This was especially possible thanks to the end of dumping untreated municipal waste, accompanied by enhanced material and energetic use of waste.

Recycling up for expansion

But there is still room for improvement in Germany, according to the study published in April on plastic waste in Germany. The Wuppertal Institute for Climate, Environment and Energy compiled the piece on behalf of NABU.

If the use of plastics does not change, the study indicates, a total volume of more than 12 million tonnes of plastic will be in circulation by 2030. That is nearly 28% more than in 2013.

Aside from the construction and automobile industry, plastic bags are also a huge source of plastic waste. According to the European Commission, 98 billion used plastic bags created over 1.5 kg of CO2 emissions each in 2010, alone. Amounting to about 15 million tonnes of CO2 in total.

According to Eurostat, in 2011 some 37% of waste ended up in landfills, 25% was recycled and 15% was composted. Some 23% was burned, typically for energy recovery.

Germany, the Netherlands, Sweden, Belgium, Austria and Denmark largely phased out landfilling, while Romania, Bulgaria and Malta dumped nearly all of their municipal waste.