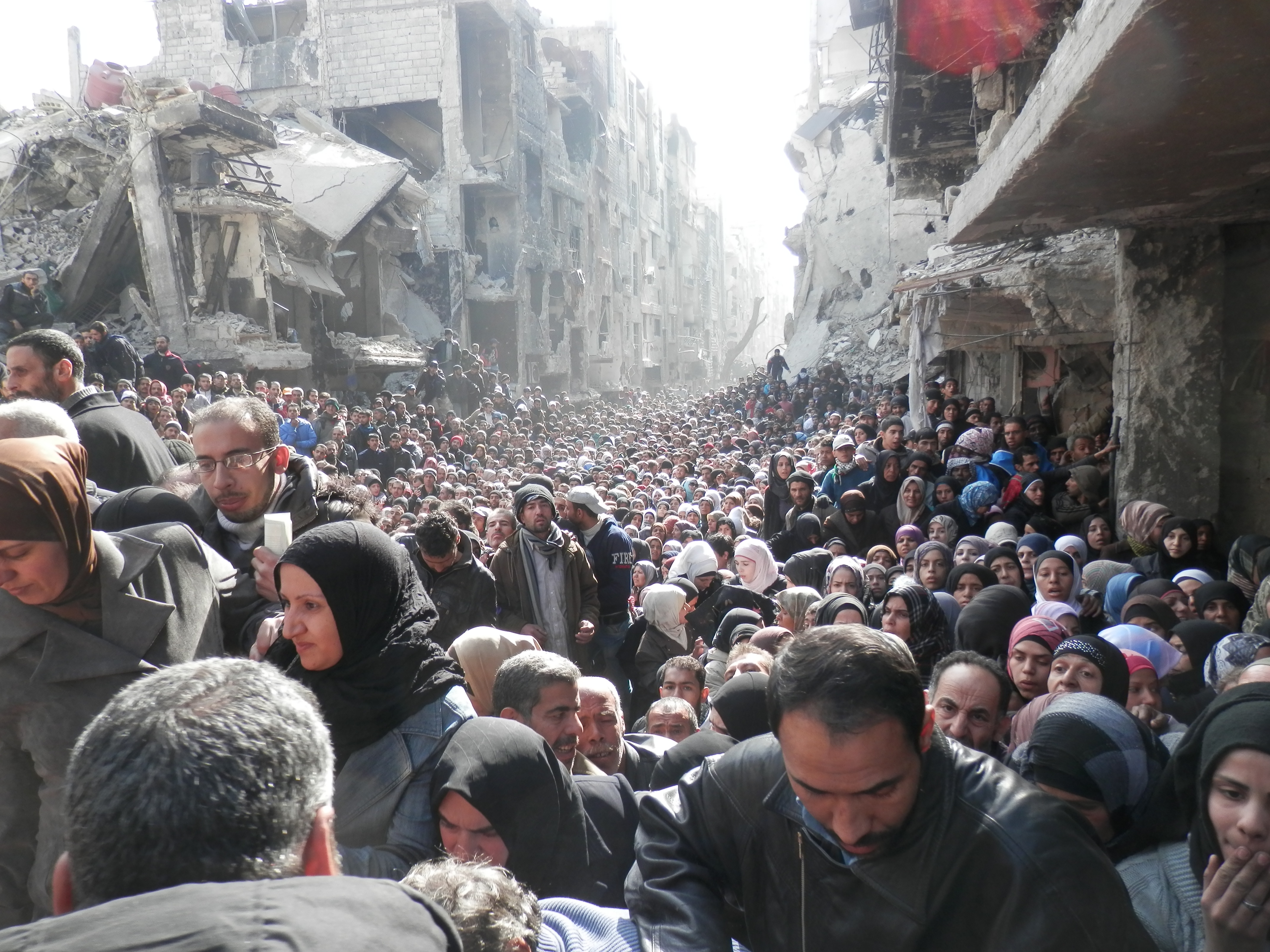 Yarmouk (pictured) was the largest refugee camp in Syria before the war with a population of 160,000 Palestine refugees.[UNRWA]

Few issues polarise public opinion more than the Israeli-Palestinian conflict. Whether it’s Europe, or the United States, the problem is the same. One of the main reasons why is the ongoing crisis of what to do with the descendants of the 700,000 plus refugees, created by the first Arab-Israeli war, in 1948. Spread around the world, their numbers today exceed 5 million.

120 children were recently allowed out of Yarmouk, the Palestinian refugee camp in Damascus, to sit public exams. The 14-year-olds emerged from the apocalyptic city-scape they call home shell-shocked and bewildered, child victims of one of the most pitiless conflicts of our age.

Two weeks later those same children returned to Yarmouk to be reunited with their families, to a place where UN food deliveries are meeting just a quarter of the nutritional requirements of over 18,000 civilians trapped there in an extraordinarily harsh environment, an environment in which the absence of medical care can result in death from conditions that are otherwise easily treated and cured.

It was a bittersweet, profoundly tragic moment that cruelly exposed the hopelessness confronting those young students. Moreover, it was a metaphor that poignantly encapsulated the unsustainability of the Palestine refugee crisis in the Near East.

In Syria, more than 50% of the 550,000 UNRWA registered refugees have been displaced by the conflict, with over half of the 12 Palestinian refugee camps where we work transformed into theatres of war.  On World Refugee Day, the plight of this often forgotten population must be acknowledged and the dramatic context in which they struggle to survive understood in all its complexity.

Beyond Syria, unsustainability confronts Palestinian refugees living in the West Bank, where the human impact of the Israeli occupation and settlement expansion is multi-dimensional and profound. Palestinian refugees are subject to a permit system that prevents freedom of movement. Many are forced to deal with home demolitions and land expropriations. Children and ordinary civilians face increased threats from the use of live ammunition. The West Bank separation barrier is destroying whole communities. The occupation is synonymous with de-development, stifling economic life with predictable human consequences. Food insecurity in Palestine has reached 33 per cent, affecting 1.6 million people according to the United Nations’s latest food survey.

In Gaza, unsustainability has many yardsticks. One in particular has struck me profoundly. The number of Palestinian refugees coming to UNRWA for food handouts has increased from 80,000 in 2000 to over 800,000 today. When last in Gaza I met a once prosperous businessman who has now joined the food line, a tragic transformation which puts a human face to the notion of unsustainability. In Gaza there are many. Youth unemployment stands at 65%. Unemployment among young women is 80%. Unsustainability has an alarming environmental aspect in Gaza. 90% of water is unsafe to drink. The entire aquifer is likely to be unusable as early as 2016, with the damage irreversible by 2020 if present blockade policies are not changed. There are few immediate signs that they will be.

With each passing day, it becomes an increasing imperative to listen to the voices of the dispossessed and heed their enduring warnings about loss and fear. Decades on, and with so many other crises affecting the Middle-East and the world, there is a real risk that their fate will be overshadowed and seen as an “old story”. I would argue that neglecting the plight of Palestine refugees is a risk the world cannot take.

Yet from Yarmouk, to the dismal Palestinian refugee camps in Lebanon swollen by over 50,000 new arrivals from Syria, to the refugee communities trapped behind the barrier in the West Bank, and on to the downward spiral in Gaza, unsustainability haunts almost all aspects of life. I have yet to meet a refugee who wanted to be a refugee and even less so, who wished to remain a refugee. Palestinian refugees are no different. Their call for a just and lasting solution to their plight must be heard.

Until this is achieved, relief workers have a transformative role to play. During times of relative peace, our human development work in education, health, relief and social services promotes stability, dignity and respect for rights. In times of war, our emergency assistance builds resilience and mitigates the denial of rights to some, albeit an inadequate extent.

Now in our seventh decade, the United Nations’ contribution speaks for itself: we have achieved some of the highest literacy rates in the Middle-East, dramatic reductions in child and maternal mortality. Our commitment rivals that of any humanitarian actor, working under fire to provide emergency relief in Syria, Lebanon and Gaza.  This will continue until a solution to the plight of the Palestine refugees is found. I understood from day one that the United Nations’ mandate is not for sale.

I believe passionately that UNRWA’s contribution is inextricably linked to that of the refugees who make up the vast majority of our staff. Like all refugees, the Palestinians are also individuals with achievements and pride. They are victims of injustice, of occupation, blockade and conflict. They are also actors in their own development with skills that many in the world would envy. Palestinians are justly proud of the comparative literacy rates of their children and the highest attainment levels of generations of professionals.

The UN’s efforts will focus both on mobilising hosts and donors to preserve and further strengthen our achievements, while raising the importance of increasingly recognizing that international assistance must come with the promotion of rights and dignity. Let us not forget that this is a crisis with a human face, be it those shell-shocked children in Yarmouk, the ex-businessman in the food line in Gaza, or any of the five million individual refugees registered with us. No amount of aid will ever make up for the denial of their rights and dignity.