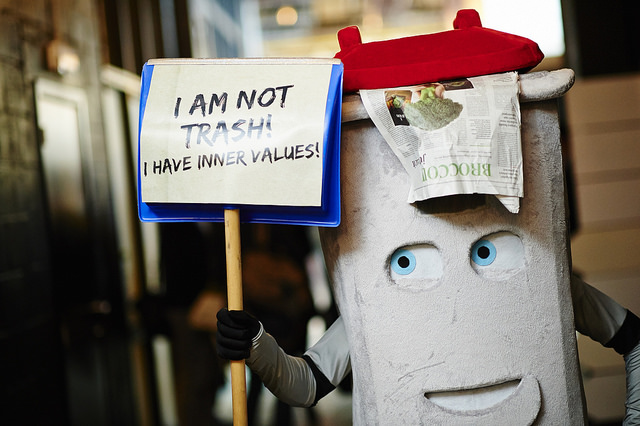 The European Commission received a lot of criticism after its announcement in November 2014 that it would draft a more ambitious circular economy strategy, writes Paul Featherstone.

There is great pressure on the European Commission to present a proposal on the circular economy overflowing with ambition by the end of 2015. The political families in the European Parliament are aligned in demanding that the Commission inflicts a “paradigm shift” on EU resource efficiency and certain environmental NGOs even fear the proposal is “officially dead” already, thereby making sure that Commission Vice-President Frans Timmermans will not get away with anything that is less than ground-breaking.

The uncertainty around the legal status of former foodstuffs destined to animal feed shows why the Commission needed to take one step back to move two steps forward, in this area of food chain sustainability.

Former foodstuffs are no longer intended for human consumption, however they retain a great value, both nutritionally and commercially, in animal feed production. They are unintended/unavoidable losses in food manufacturing and typically take the form of broken biscuits, misshapen chocolates, incorrectly flavoured crisps, bread with production errors and surplus products from seasonal festivities (Christmas, Easter, international sports events, etc.).

Former foodstuff processors collect these energy-rich raw materials, remove any packaging, and process them into a feed ingredient destined to compound feed manufacturing, after the food producer has taken the possibilities for food donation into consideration.

Prevent the waste legislation becomes applicable in the first place

An issue today is that former foodstuffs are neither a food nor a feed according to EU legislation. Operators depend on national competent authorities to correctly interpret this secondary resource as a “by-product” according to the Waste Framework Directive, which leaves a sphere of legal uncertainty for both food manufacturers and former foodstuff processors as environmental authorities can act within their own competence and cause unnecessary disruptions.

Considering the food losses technically never leave the food/feed chain and therefore remain bound to the principles of the General Food Law, only the controls of food and feed safety authorities should apply.

A shortcoming in the initial proposal on the circular economy on the matter of food waste was that it only aimed to create a dividing line between which food losses should be considered “food waste” and which should not.

Though food losses destined to animal feed were rightly considered to not constitute as such, the real challenge is to create a regulatory framework that prevents food losses eligible for animal feed from becoming a “waste” in legal terms under any conditions in the first place.

Currently there still are many food manufacturers in the EU that prefer to dispose their food by-products through bioenergy or compost, fearful that the legal responsibility of a “feed business operator” could be a risk factor.

The Commission needs to remove any existing legal uncertainty around the safe use of food losses in the feed chain that benefit the EU circular economy.

Going beyond the recycling waste as a resource

The redrafted proposal on the circular economy needs to go beyond the question of “recycling waste as a resource” and actually define the legal boundaries of the internal market for food losses eligible for animal feed specifically outside of the Waste Framework Directive. This work could not be performed as efficiently by the European Parliament through amendments on the initial proposal, as it requires a link up with several other pieces of European legislation, most notably feed regulations.

Therefore the Commission was right to suggest a comprehensive, coherent approach towards the circular economy that fully reflects interactions and interdependence along the whole value chain.

If this amount of feed material had to be produced with wheat, which is nutritionally equivalent to the end-product former foodstuffs processors make, an acreage of 350,000-400,000 hectares would be needed. Across the EU, particularly in Eastern and South-Eastern Europe, there is likely up to 1 million tonnes of former foodstuffs that currently is used in a less sustainable way, thereby making the former foodstuff processing sector a potential source of green job creation.

With a dedicated chapter on the resource efficiency of the food chain in the new proposal on the circular economy, the EU has the opportunity to remove the barriers that put a brake on the use of former foodstuffs in animal feed and encourage operators to keep food losses in the food chain.