How can developing countries make themselves heard at the UN Climate Change Conference? 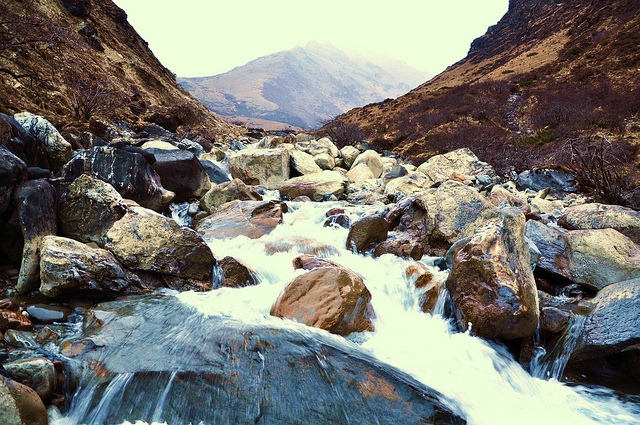 For countries such as Bhutan, at the sharp end of climate change, the question is, will their cry be heard? [Inga Vitola/Flickr]

Developing countries such as Bhutan, which are hard hit by climate change but contribute little to it, face significant challenges in reaching a fair agreement at the UN Climate Change Conference in Paris, writes Ian Duncan.

I met the Lonchen of the Dragon Kingdom last month in Brussels.  Not a Game of Thrones character, but the Prime Minister of Bhutan, the Buddhist kingdom locked in the high Himalayas.  Dressed in a striking knee-length robe, Tshering Tobgay was in the European Parliament to speak of the challenges facing his mountainous land.

Bhutan is a country the size of Switzerland which nestles between China and India.  At its lowest point it is 160 metres above sea level. It soars to over 7,500 metres at its peak.  The people of Bhutan – some 750,000 – began their transition to democracy only seven years ago. The same year that President Obama was elected. Tshering Tobgay is the first leader of the opposition to become prime minister, since before 2008, there was no opposition. The internet only arrived in the Kingdom in 1999, the same year the ban on TV was lifted.

Bhutan is the country which initiated the concept of Gross National Happiness – the brainchild of the fourth Dragon King, Jigme Singye Wangchuck – a holistic approach to development which gives weight to the non-economic aspects of wellbeing. Although criticised by some for its subjectivity, in 2011 the UN General Assembly unanimously agreed to place “happiness” on the global development agenda.  According to a global survey by US Business Week magazine Bhutan is the happiest country in Asia and the 8th happiest in the world.  The UK ranked a respectable 21st.

For the prime minister of a happy people, Tobgay had much on his mind, most of it centred around the impact of climate change in the high Himalayas and the impending UN talks in Paris. In truth, there is little more than Bhutan itself can do to address climate issues.  The country is already carbon neutral. Its vast forests cover 72% of the country (by constitutional mandate they must always cover at least 60%), absorbing six million tonnes of CO2 a year in a country that generates only 1.5 million tonnes. The Bhutanese do love trees. On the day the Prime Minister spoke in the European Parliament the Bhutanese were celebrating “Social Forest Day” (3 June) with a mass public tree planting, 50,000 trees in a single hour – a Guinness World Record.

As Prime Minister Tobgay warned, the impact of global warming is keenly experienced at altitude. In the past 20 years, temperatures above 4,000 metres have warmed 75% faster than at altitudes below 2,000m. A rise in temperature of 1oC at sea level can be equivalent of a 4oC rise in the high mountains.  With a tenth of Bhutan covered by glaciers it is easy to see why the Prime Minister is concerned. The previous Bhutanese Prime Minister Jigme Thinley was stark in his warning, “Our glaciers are withdrawing very fast and we have reasons to worry that they may in fact disappear not in 2035 [as a 2008 UN report had predicted], but even earlier.”

Not all the impacts of warming in the high mountains are felt at altitude. Several of Asia’s mighty rivers rise in the Himalayas: the sacred River Granges begins in the melt of Gangotri Glacier, the Yamuna Rover from the glaciers of the Bundar Poonch, the Brahmaputra, the Indus, and the Spiti Rivers, all vital to the lowlands of Asia, begin in the Himalayas. Even modest changes in the mountain microclimate can change the hydrology of an entire continent and increase the frequency of extreme events such flooding (and perversely) drought.

The road to Paris

The UN Climate Change talks in Paris are fast approaching. For countries such as Bhutan,  at the sharp end of climate change, the question is, will their cry be heard?  UN gatherings are often dominated by the big guys, stripped to the waist, circling the room, pounding their chests.  When that happens, the needs, frankly even the views, of smaller states can be overlooked, under-represented or simply drowned out. The traditional approach for countries such as Bhutan has been to join a chorus; find other like-troubled countries and sing from the same hymn sheet, in the hope that the louder voice is heard and heeded.

Bhutan is a member of the eight-strong South Asian Association for Regional Cooperation (SAARC), a body which has had much to say on the issue of climate change. However, its only unifying feature is geography. The members of SAARC are very different in terms of politics (India and Pakistan pulling on the same rope, anyone?) and each belongs to very different negotiating bloc when discussions move from general arm waving stage to the nitty gritty negotiations on issues such as responsibility, finance or mitigation versus adaptation.

India is one of the BRICS (Brazil, Russia, China, and South Africa), the Maldives is a member of AOSIS (Alliance of Small Island States), Sri Lanka and Pakistan are Like Minded Developing Countries (LMDCs), Bhutan, Nepal and Bangladesh are Least Developed Countries (LDCs).  It would be hard to envisage a single group with more disparate drivers and divergent needs than SAARC.

At the recent UN Climate Change gathering in Bonn, as states fumbled for common ground before the Paris talks, the leaders of the SAARC were able to gather around the principle of Common but Differentiated Responsibility (CBDR).  UN Negotiations are jargon heavy, but in laymen’s terms, it means that all agree there is a problem to be addressed, but each state’s contribution to the solution should depends upon its level of economic development; “from each according to his ability…”.

So how well do you know your alpha-betti blocs? Will the BRICS – which includes the heaviest emitters of carbon – be happy to fund adaptation measures in countries such as Bhutan or elsewhere in South Asia? Will the LDCs demand more money than their South Asian peers, since their economies are least equipped to cope? Will AOSIS be heeded when it points out that their islands must be at the front of the queue for supports otherwise there wont be any islands left.  Will SAARC speak with one voice or will its message be drowned out by the hubbub from its own members? Will South Asian unity retreat like the glaciers in the high mountains?

Let’s give the last word to the Prime Minister of Bhutan: “Sadly, we are already living with the consequences of climate change. Snowfalls have become less frequent not just in the valleys but even on our mountaintops. Glaciers are retreating, crop yields are fluctuating, water levels in our rivers and streams have receded and we are experiencing more extreme climate. Flash floods and landslides have become recurring events, causing widespread damage and destruction […] it’s getting hotter. We are causing it. And we have to act now.”

0 responses to “How can developing countries make themselves heard at the UN Climate Change Conference?”