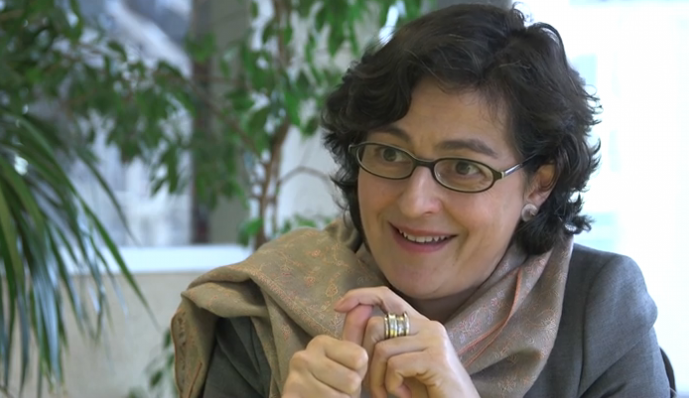 Arancha González is the Executive Director of the International Trade Centre (ITC). [EURACTIV]

The European Commission’s Trade for All strategy, unveiled in October, gives the EU the proper tools to chase emerging and growing markets, said Arancha González, in an interview with EURACTIV.

Arancha González is the Executive Director of the International Trade Centre, the joint agency of the United Nations Conference on Trade and Development and the World Trade Organization.

What are the strengths and weaknesses of the Commission’s new trade strategy?

The main strength is that it tackles the two ingredients necessary for any trade agreement to work: making trade possible, and making trade happen.

A trade strategy, by necessity, has to focus on making trade possible, levelling the playing field.  From this point of view, it is absolutely spot on – not on focusing on tariffs, as that is yesterday’s business, but non-tariff barriers, which are the 21st century’s trade barriers. It goes beyond just goods and incorporates services. This is the way forward.

Digital commerce, the movement of professionals, these are the underlying factors that provide services, so the focus is on these too.

The strategy has the right software to level the playing field, from a trade-barriers perspective, as well as having the right idea about for whom trade should be facilitated.

Not just big corporations. In reality, trade policy is more useful for small and medium-sized enterprises, which make up more than 90% of the economic tissue of our countries, more than 70% of employment and more than 50% of contributions to GDP. This is where the trade policy gets it right.

It’s no coincidence that small and medium-sized enterprises are gathering momentum everywhere, here in Europe, in the G20, in the United Nations Global Goals, in the WTO. So, everywhere, people are realising that trade policies need to work for these companies. The big guys already know how to make it work. It’s the smaller players that need to be given more focus.

I am also a fan of how it packages measures that underpin the values of trade policy today. It’s not enough to merely say that you want to eliminate trade barriers. It’s important to put it into context. The context, in this instance, is very clearly defined – sustainable trade, inclusive trade, climate-and-environmentally-friendly trade, ethical trade etc.

From this point of view, it makes a lot of sense, because it is compatible with the values of European consumers, who are, at the end of the day, the beneficiaries of (this) trade policy.

As I told the European Parliament, this is as useful to European SMEs as it is to foreign SMEs. This is not a case of the virtuous North talking to the corrupt South. Corruption is a problem everywhere.

In terms of weaknesses, I haven’t seen enough economic empowerment for women, which is a big factor in providing inclusive trade. I was asked by some parliamentarians whether I meant women as consumers, or women as producers. My answer was that I’m talking about women as economic actors.

Studies also show us that women spend 90% of money on their family and in their community. This is compared with a 40% average for men.  So we know that the spending patterns of women are linked to reducing extreme poverty, one of the main objectives of the 2030 agenda. It’s a no-brainer. I didn’t see much in the communication about women’s empowerment.

Yes, making it possible is one thing, making it a reality is another. There are two parts to this. The first is implementing the policy. This means that the job of the negotiators is not over when the agreements are signed. This is, in fact, when the real job begins.

The mindset changes. It’s no longer a question of making concessions, it’s about working with businesses. That’s the internal side. The external side is linking trade with development aid, and the private sector.

Europe is spending a lot of money on trade aid, but it needs to be better linked to development cooperation strategy.

The private sector has a huge role to play in this. European businesses are very active, very vibrant and quite frankly, countries want to see more economic development in development cooperation with the EU. This package offers all this. More effort to build the markets and jobs in the south means the people in the south don’t have to leave to find jobs elsewhere.

Do you think the Commission has learned the lessons from TTIP and has injected enough transparency in this new trade strategy?

In my view, the answer to the angst generated by these kind of negotiations, is the fact that this communication guarantees that regulatory standards can only be improved or tightened.

There cannot be any damping down. They can only be upgraded. This is more valuable than mere transparency.

I’ve been a trade negotiator and there is scope for transparency, especially when the objectives are being defined. There must be full transparency at this point and a good dialogue with your stakeholders.

In the course of the negotiations, there has to be a little bit of transparency and room for discretion, because no international organisation or nation negotiates in the spotlight. It just doesn’t happen. A balance has to be struck. Then at the end of the agreement: full transparency once again.

People need to see what is on the table before it is signed. Remember, the Commission may be negotiating, but ir will not green-light or validate it. There’s a political process for this.

In terms of substance, can we say that there is a pivot to Asia?

My sense is that the EU is chasing growing, emerging markets and developing countries that are growing. The EU strategy has a strong multilateral root, on which it build it up with smaller economies, through trade agreements. This was the case with the ACP countries, Chile, Columbia, Costa Rica, Central America, Peru and Mexico.

Chasing these smaller economies complements the strategy with the bigger players in the WTO. If the WTO economies aren’t moving fast enough for the EU, it moves on to striking agreements with larger partners outside of the WTO.

This was the case with the US, and what has been started with Japan. It’s also the same with Australia, New Zealand and the ASEAN countries. The big shift happened when the EU went after the big economies that were off limits to trade policy at a bilateral level.

Of course. There are two big parts missing. Russia and China. For China, it’s a gradual process, starting with investment. Once that’s been tested, it will move into a potential free trade agreement.

Do you think starting similar processes with Taiwan and Hong Kong will create tensions?

The EU has already told Taiwan ‘let’s do an investment agreement’. I helped facilitate the entry of China into the WTO, which coincided with the entry of Taiwan – let’s say Chinese Taipei, into the WTO. It was very carefully done and the EU, as well as other countries, were very careful to make sure it did not impeded the two from conducting their own talks in a more harmonious way. The EU is always careful that it doesn’t pull the rug in any specific direction.

What about the multilateral track?

I would say two things. First, the WTO is functioning well across some of its departments. In trade negotiations, it’s not functioning so well. I wouldn’t say this was a conjunctural issue, this is a deep-rooted issue, based on a re-balancing of the world economy and increased number of large stakeholders. It’s a geopolitical problem, not a problem of trade-concessions.

The only avenue left for the WTO is to be more pragmatic and use smaller packages to circumnavigate these issues, as we are seeing with environmental goods and services. It’s the only way, in my view, that the WTO’s negotiating department will keep functioning.