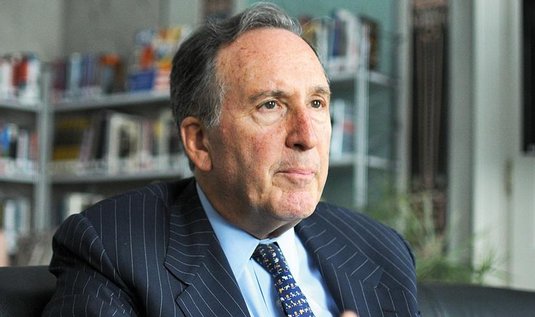 Sherman Katz is senior advisor at the Center for the Study of the Presidency and Congress (Washington). Hehas served as a trade policy issues advisor to the Presidential campaigns of Barack Obama, Bill Clinton, Jimmy Carter among others. He participated in the recent debate ‘Why the Globalized World Needs Free Trade Agreements in the Globalized World: Understanding the US Policy Behind TTIP’, co-oganized by the US Embassy in Slovakia and EURACTIV.sk.

Are free trade agreements the driver of globalization, or one of the last tools for the governments to shape it?

A lot of the motivation for TTIP [the Transatlantic Trade and Investment Partnership] came from Europe seeing the United States turning to Asia. For Europe, the thinking behind this probably was (that) we might be missing an opportunity ourselves. To see this as something that was started in US corporate boardrooms is overlooking that bit of history.

Another bit of history is that 160 members of the WTO in Geneva launched a development round in 2001 that hoped to address 21st century trade issues. Unfortunately, that round has not moved nearly as fast or as comprehensively as people had hoped. Therefore, there has been increased motivation for regional trade deals.

The EU and the US want to move trade deals into realms like digital commerce, which have not been dealt with in previous trade deals. Related to this, the US and the EU would like this trade deal to become the model for many other countries who are not part of this agreement.

Yes, there are always winners and losers from trade. In the US, we have a program – I do not think it is as large or as effective as it should be, but that is a different discussion – for workers who might be hurt by trade. I think you also have programs in Europe, again maybe not as effective as they should be.

Is it possible to estimate, at this stage of the negotiations, who will benefit more from TTIP? Europe or the US?

Certainly not one country more than the other. One can say by virtue of global economic development what parts of each will benefit most, like the Slovak company Resco Net, who saw the opportunity to provide a mobile application to Microsoft in the United States. My point is that heavy industry in Pittsburgh, for example, in the US where I come from, has increasingly moved to countries where it can be more successful and flexible than in the US. The largest employer in my home town is now a medical center. It’s similar in Cleveland. One will find in all countries there will be a migration to new industries where the intellectual input and creativity are the largest value, rather than labor and other inputs.

You suggest that free trade will drive a larger economic transformation. But are we really prepared for that in terms of education systems or workforce? We are talking about a timeframe of several generations, aren’t we?

We are, and those are questions that we are facing in the US very vividly; public education has not kept up. We are struggling to find what combination of resources and teachers and parents and children will produce the best outcomes. Similarly, we are struggling with workers who spent most of their working lives in old industries who now need new tools to move to new industries – how do we get industries to work with government so that these people are trained for future jobs? These are difficult questions, but the global economy moves fast, and the prize goes to the swiftest, so let’s win the race.

The argument in favor of TTIP we often hear is that it will set global standards. Could you elaborate on how exactly this will happen?

For example in the energy area, in 1947 when the General Agreement on Tariffs and Trade was formed there was a decision not to include oil, where the trade didn’t involving very many countries. Now it involves almost all countries, and yet there are very few rules. There are no rules against monopolies, no rules against price fixing, so we see producers from the OPEC group meeting regularly to fix these prices.

We in the non-oil producing countries are heavily dependent on decisions they make with no input from us. Is this the way it should be? So if the EU and the US in TTIP can agree on certain rules, such as the ones we already have in our economies – more transparency, more competitive access for third parties to pipeline utilities – won´t that be a good example for the rest of the world?

On the other hand, one of the arguments against TTIP concerns regulatory cooperation. Some opponents argue that while they do not see a risk of TTIP watering down current standards, it will still make it more difficult to raise standards in the future, for example, as scientific knowledge advances.

I don’t think so. Consider first the fact that both the US and the EU have made agreements with many developing countries with far lesser levels of industrialization. That has not led to a dilution of our standards; on the contrary, they are as strong as they have ever been. Number two, two of the tools that we are looking at to bridge the gaps on regulations are mutual recognition and regulatory cooperation. Mutual recognition does not mean that we will give up our standards. It means we may have ours, you may have yours, and in certain cases we may recognize those as equivalent. Having these discussions does not mean that we will agree. Let’s suppose that there are 10 areas of regulation in the deal. Maybe we reach a deal on principles that should govern 7 or 8. In order to reap the benefits of the agreement, we postpone a couple of them to a transition period so that we can move forward on those that we can agree on.

Regulatory cooperation does not mean that regulators or legislators would surrender their initiative and authority to make the regulations for their own country; rather, it involves a process of dialogue, which could be of mutual benefit.

But wouldn’t that make the whole process much more complex and less transparent by adding another channel of decisions?

It would add another voice, yes, but I take issue with not being more transparent. As business gets done across borders, to an increasing extent it becomes an anachronism to have regulations that only apply within the borders of a country, borders that may have been drawn three hundred years ago. We want to have all the affected entities having a voice on what the regulations are that cover them. If we do this in TTIP, rather than in an ad hoc behind the scenes kind of way, it is more likely that the process will be transparent.

Another issue that comes up in European TTIP-related discussions very intensively is the Investor State Dispute Settlement (ISDS). The EU is increasingly in favor of an overhaul of the system of private arbitration, meeting with resistance from the American side. Why is it so important for the US to have ISDS in TTIP?

The US has been perhaps the biggest exporter of foreign investment capital in the world. The treaties that we made with Czechoslovakia in 1992 reflect that fact; it is generally agreed that that agreement favored investors. Now with investments so much more widespread and coming from different directions, it is generally recognized in the US that a new balance needs to be struck.

Which deal is higher in the priorities list in the US –TTIP, or the TPP with Asia?

I think it is a matter of sequence rather that a matter of importance. We started the TPP conversation in 2005 and it has taken almost 10 years, but we are heading towards the conclusion. The capacity of Washington to handle these deals is basically limited to one at a time. So surely we will finish the TPP long before we finish TTIP. TTIP is taking longer than we hoped. After all, we have so much history together, we have alliances and all kinds of commonalities, but we also have cultural differences, and those underlie the different regulatory choices that we make. That is why it is taking longer than we thought. But we will complete them eventually, maybe not in the Obama administration, but if not, the next president will finish them.

Do you presume it will be a topic in the US presidential campaign?

Politicians try their best to keep trade out of the campaign but I do not think they will succeed, because it is more and more important, and eventually they will be called on to take positions. I think they will, and I think overall, there is an increasing consensus in the US for trade. They will be supportive of both TPP and TTIP.

0 responses to “Katz: Regulatory cooperation does not mean surrender”