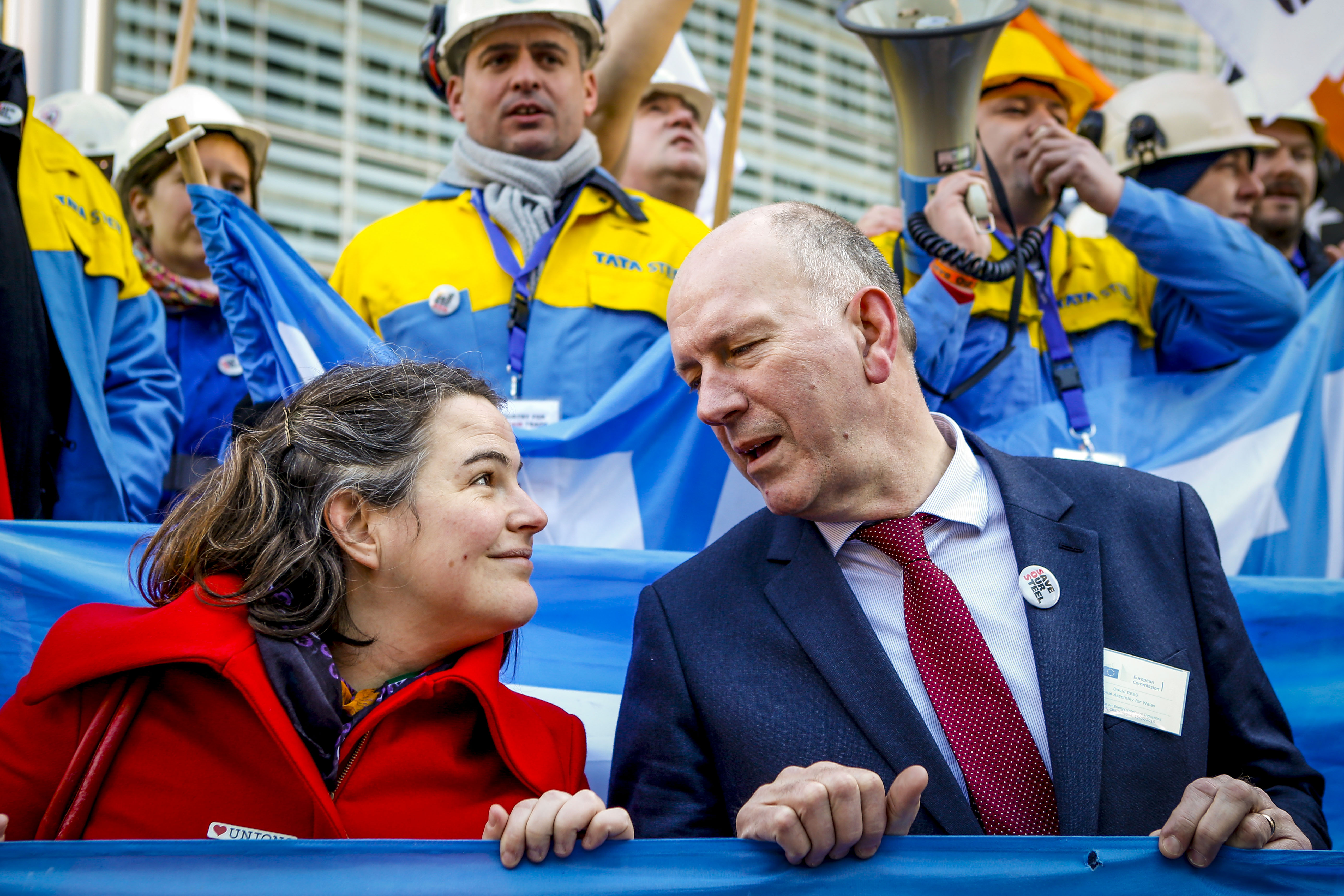 Jude Kirton-Darling, with David Rees of the Regional Welsh Assembly, at the recent steelworkers' protest in Brussels. [EUROFER]

The steel crisis has cost lives in the North East England constituency, MEP Jude Kirton-Darling has said, before launching a blistering attack on the British government for its inaction in the fight to save the industry.

Labour’s Kirton-Darling accused the Tories of blocking EU action that could help protect the industry and of increasing the chances of Brexit by lying about EU rules.

Jude Kirton-Darling is a Labour MEP for the North East England constituency. She spoke to euractiv.com News Editor James Crisp.

You represent the North East of England constituency in the European Parliament. What does the steel industry mean for that region?

I think the best summary of the very deep relationship this region has with the industry is in the song Steel River, by Chris Rea.  He comes from Middlesbrough, and grew up on the next street from mine.

Steel River is about the deindustrialisation of the Tees Valley, in the North East. Steel runs through the blood of the North East. It’s a coal and steel region like many others across Europe and that brings a cultural identity, as well as a well-paid, skilled job.

But there’s been massive restructuring over the last 40 years, starting with the privatisation of British Steel. Many jobs have been lost through automation and unfair trade competition.

But things have obviously got much worse with the steel crisis?

What we are seeing in the steel crisis in Britain is the complete abdication of the role of government in supporting steel industries. The overcapacity steel in China is being dumped on the European market, which is really debilitating.

Other industries have seen state support such as the strategic use of procurement, the reduction of energy costs, there are a lot of tools being used by governments across the EU to even out the crisis – but the UK government has failed to act.

How many steel plants are there in the North East?

Well, there was the second biggest blast furnace in Europe at Redcar. That was closed in October last year with the loss of 2,200 direct jobs.  There are several sites, and about 1,400 steelworkers still working in the area.

The loss of Redcar was a colossal blow, and Redcar and the North East of Scotland, which has been hit by the low oil prices, are the top constituencies in the UK for unemployment.  A lot of the former workers are really finding it hard to find new jobs.

Initially, there was a second chance with some finding work in offshore industry in Scotland, they had the right skill set, but the collapse in the oil price meant they were hit a second time.

What’s the social impact of this crisis in your region?

This is an unplanned and violent restructuring of the economy. From October to December last year, we lost 6,000 jobs. It has a whole array of negative impacts.

In the North East we already have the highest unemployment in the country, and very high youth unemployment.

These jobs are well paid jobs on Teesside.  They pay a third higher than average wage in the area.

It has an impact on individuals; we’ve seen a really significant increase in demand for mental health services. We’ve seen a number of suicides.

We’re talking about people who had real pride in what they were doing suddenly suffering a total loss of control. It makes people feel very powerless and that has a deep emotional impact.

Anyone wanting to understand what people are going through should read this blog. It’s written by a steelworker’s wife and charts the peaks and troughs of having to sign on.

The government could have applied for money from the European Globalisation Adjustment Fund. We’ve asked three times for the £5 million (€6.27 million) we think we could get from the fund but the British government has consistently blocked the application. It’s a slap in the face.

Tata Steel has agreed to sell part of the business.

Yes, Tata Steel’s long products business, which has two mills in Teesside, is being sold to Greybull Capital.

Yes. It’s a sign of how deep this crisis is that this feels like good news.  They specialise in turning round distressed businesses.  The negotiations have been really, really torturous.  It will mean pension cuts and pay cuts but there is a glimmer of hope that that part of the business and that several thousand jobs will be saved.

Do you have close links with industry?

So what is the solution? Is there a solution?

The immediate action we need is a deal at 13 May EU Trade Council on the modernisation of EU trade defence instruments.

The European Commission brought out a proposal in 2013. That was amended. Ever since April 2014, it has been blocked in the Council by a blocking minority of 14 countries lead by the UK.

So you are saying the UK is blocking instruments needed to defend its steel industry against Chinese dumping?

But they’ve blamed this on the EU.

This government has cried crocodile tears over the industry. They have said their hands are tied by EU state aid rules. Business Secretary Sajid Javid told steelworkers in Redcar that, which was deeply, deeply dishonest.

It was only Labour MEPs that exposed how there were other tools and this was an excuse for inaction.

How much influence do you think this could have on the upcoming referendum on EU membership?

Well, if the government tells you the EU is stopping action that could help save your job; you will believe that the EU is doing something bad.

I think it’s a dangerous one. It has an effect on people living in steel communities but also on people in Britain more broadly. The Tories used EU rules as a cover for their own national inaction and that is playing out in the Brexit debate. That lie brings in the whole idea of sovereignty. I think that is really dangerous.

But isn’t there a risk of protectionism in Europe?

We are not talking about massive levels of protectionism. We’re looking for an exemption from the lesser duty in a case of mass dumping from China. A trade tariff might be 12%.

It’s about recognising that we are dealing with a planned economy with a five-year plan that continues to bring more overcapacity onto the market.

This is not about protectionism, it’s a about fair trade. No markets work without regulation. The current measures are too weak and too restrictive in Europe and everyone is waiting for the UK to adjust its position so we can take proper action.

Do you think that part of the problem is that the UK and the EU in general is on the hook for Chinese investment? [China is co-financing the nuclear power plant at Hinkley Point in the UK).

The government has decided we need massive investment in transport, energy and in infrastructure and that it most comes from outside the UK. Hinkley Point is clearly a good deal for the Chinese. The British taxpayer is a cash cow for the Chinese. Perhaps the counterpart to that deal is that we don’t kick up a fuss about the loss of our manufacturing.

This government simply doesn’t care or understand manufacturing industries. There’s no concept that you need to have a policy framework to support industry.