Wearing a Peruvian shawl, Obama poses for a family photo at the APEC Summit in Lima. [Reuters]

Trump campaigned for US president on a promise to pull out of the 12-nation Trans-Pacific Partnership (TPP) trade deal, and also threatened to impose steep tariffs against China and Mexico.

As the Trans-Pacific Partnership nears completion, trade pundits in Brussels are urging the EU to turn its attention to Asia, and jump-start trade negotiations with TPP countries, beginning with New Zealand.

Regional leaders responded on Sunday, saying they would push ahead with the TPP.

“We reaffirm our commitment to keep our markets open and to fight against all forms of protectionism,” they said at a summit meeting of the 21-country Asia-Pacific Economic Cooperation (APEC) group in Peru.

On his last foreign trip before he leaves the White House in January, President Barack Obama said abandoning TPP would be a mistake for the United States.

“I think not moving forward would undermine our position across the region and our ability to shape the rules of global trade in a way that reflects our values and our interests,” Obama told a news conference at the end of the summit.

Obama negotiated the TPP but has stopped seeking its congressional approval and says its ratification is now up to the incoming Trump administration. 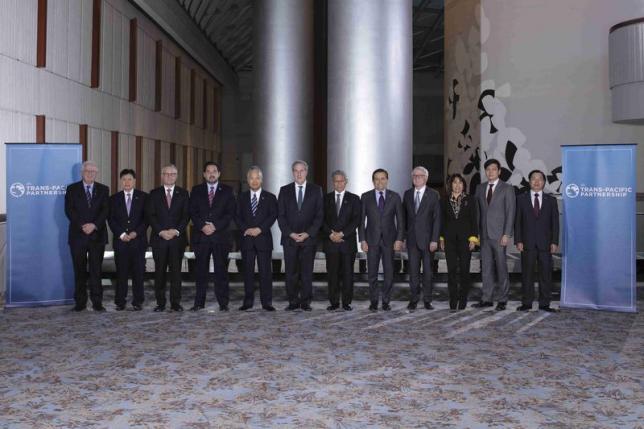 Pacific trade ministers have reached a deal on the most sweeping trade liberalization pact in a generation that will cut trade barriers and set common standards for 12 countries, an official familiar with the talks said on Monday (5 October). The deal should re-invigorate talks on TTIP.

China is not part of the TPP and has been pushing an alternative vision of free trade in Asia under the so-called Regional Comprehensive Economic Partnership (RCEP), which does not currently include countries in the Americas.

Tan Jian, a senior member of China’s delegation at the summit, said more countries are now seeking to join its 16-member bloc, including Peru and Chile, and that current members want to reach a deal as soon as possible to counter rising protectionism.

In a final declaration, APEC leaders said the TPP and RCEP were both valid paths to a broader Free Trade Area of the Asia-Pacific, which has long been a goal of the APEC bloc that accounts for 57% of the world economy.

“We encourage that all regional undertakings, including TPP and RCEP, remain open, transparent and inclusive and draw on each other,” they said.

Some APEC leaders in Lima have suggested the TPP could continue without the United States, but others said that would require a complete renegotiation.

Another way forward might be to make some cosmetic changes that would allow Trump to change his mind on the TPP without losing face, New Zealand Prime Minister John Key suggested.

Obama said he was already hearing calls for a “less ambitious” free trade agreement with fewer protections for workers and environmental standards, a likely reference to the China-led RCEP.

“That kind of agreement would obviously exclude US workers and businesses and access to those markets,” he said.

China’s delegation warned against the “politicization” of trade agreements and said they should not just be for rich economies.

Peruvian President Pedro Pablo Kuczynski, who hosted the summit, said it was too early to write off the TPP and that Trump’s support was due more to “difficult economic conditions” than to fierce protectionist sentiment.

Canada, a member of TPP but not RCEP, is keeping its options open on future trade deals, Prime Minister Justin Trudeau said.

Australia, similarly, said it was pursuing various opportunities, including RCEP.

“Well as I’ve indicated previously, Australia doesn’t have all its eggs in one basket,” Trade Minister Steven Ciobo told reporters. “It’s not a case of the TPP is all that there is for Australia.”