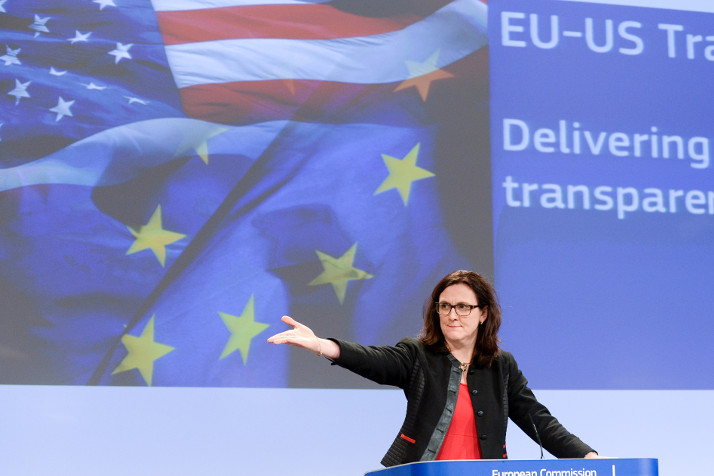 Cecilia Malmström, EU Commissioner for Trade, said she supported the idea of creating a permanent investment court to replace the Investor-to-State Dispute Settlement (ISDS) mechanism, which has come under fire in the EU-US trade talks.

“I have already instructed my staff to start working towards it,” she said during a meeting with MEPs in the European Parliament on Wednesday (18 March). “However, I believe that we should aim for a court that goes beyond TTIP,” she continued.

ISDS is controversial, because it allows investors to take governments to international arbitration tribunals rather than to domestic courts. It could be dropped, modified or kept in its current form, when the trade pact is finally sealed. The US wants ISDS included in the landmark free trade agreement.

Last week, MEP and former Commissioner Viviane Reding pushed the idea of an independent court to replace the current arbitration system in an exclusive op-ed published by EURACTIV.

“As former vice president in charge of justice and fundamental rights, Member of the European Parliament responsible for trade, I remain firmly supportive of an international Investment Court, whose embryonic form should be created in TTIP. Why so? Because trade and justice must reinforce each other, not undermine one another,” Reding argued.

>> Read: ISDS must be replaced by a public court

Speaking to MEPs, Malmström cautioned however that a multilateral court can only be a medium-term objective to be achieved in parallel to the negotiations for a Transatlantic Trade and Investment Partnership (TTIP).

In the meantime, she said, there are other ways of reforming ISDS that could reassure those opposing it, including those in the European Parliament, who see arbitrators as lawyers prone to being tempted to work on behalf of their own interests and business opportunities, rather than the public good.

In Europe, critics have pointed to secret trials without democratic legitimation, biased arbitrators and non-transparent proceedings.

Responding to the argument of those who say that the US has well-functioning courts, the Commissioner insisted that no US law prohibits discrimination against foreign investors.

“Putting investment in the deal would close that gap, but only if the commitments are enforceable. ISDS is the only way to enforce them effectively,” she added.

EU member states already have 1,400 ISDS-type agreements with other countries, some dating back to the 1950s. There is an urgent need for reform, and everybody agrees.

The Commissioner pointed out the changes already made in the EU-Canada trade deal, which she said will not be reopened.

That includes for the first time ever a reference to the right to regulate, which reaffirms the right of the EU and Canada to pursue legitimate public policy objectives such as the protection of health, safety or the environment.

“We gave governments, not arbitrators, the ultimate control over interpretation of the rules,” she insisted.

Towards an appeal body

TTIP would go even further, according to what the Commissioner disclosed to MEPs. The Commission is thinking of “a clause that would say that investment protection rules offer no guarantee for investors that the legal regime under which they have invested will stay the same”.

Brussels is also looking into another idea: nominating a limited list of trustworthy arbitrators who would decide on all TTIP investment cases. To get on the list of arbitrators, worthy candidates need to be qualified and/or be judges in their home country.

A third possibility is to create an appeal mechanism system, which at the moment does not exist in ISDS tribunals.

“This is a concern that united business and NGOs,” Malmström said.  An appeal body with permanent members directly within TTIP would be considered an embryonic step towards a permanent multilateral court.

.@berndlange on #TTIP We cannot have an agreement at any cost We need to clarify the position on #ISDS question. Live:http://t.co/7AAwhJJ7nZ

Neither a small reform, nor a complete scrapping of #ISDS. @MalmstromEU supports my proposal for an international investment Court @EP_Trade

Question not whether to incorporate #ISDS but HOW says @MalmstromEU. #TTIP shd include "right to regulate" article @Europarl_EN @EP_Trade

The European Commission is considering issuing policy recommendations after further discussions early this year with member states, the European Parliament and other organisations such as NGOs, trade unions and business associations, Trade Commissioner Cecilia Malmström said earlier this year in Strasbourg (13 January).

0 responses to “Brussels considers replacing ISDS with a public court”