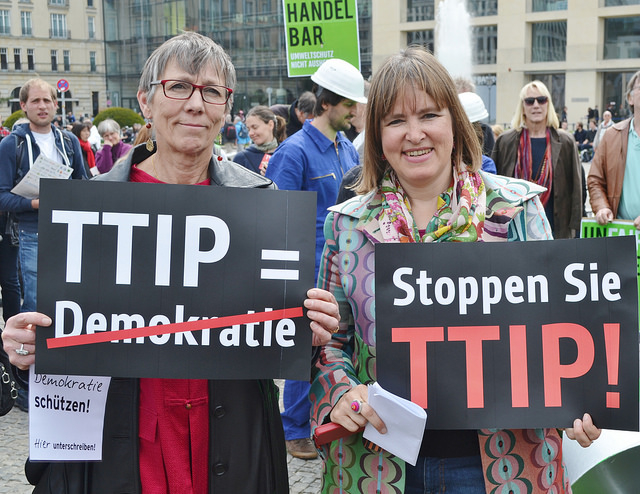 The European Commission decided yesterday (21 January) that it would be postponing negotiations on an investor-state dispute settlement mechanism in the context of the EU-US trade and investment partnership (TTIP), with a view to launching a public consultation.

“I know some people in Europe have genuine concerns about this part of the EU-US deal,” said EU Trade Commissioner Karel de Gucht, adding that the decision reflected the EU executive’s determination to secure the right balance between protecting European investment interests and upholding governments’ right to regulate in the public interest.

The European Commission’s proposal initially would have enabled US companies investing in Europe to by-pass European courts and directly challenge governments at international tribunals, whenever they find that laws in the area of public health, environmental or social protection infringe their right to do business. EU companies investing abroad would have had the same rights in the United States.

“Governments must always be free to regulate so they can protect people and the environment. But they must also find the right balance and treat investors fairly, so they can attract investment,” De Gucht said.

“International investment agreements like TTIP should ensure they do both. But some existing arrangements have caused problems in practice, allowing companies to exploit loopholes where the legal text has been vague,” he added.

Across the political spectrum, MEPs and stakeholders alike have welcomed the EU executive’s move, saying it was a step in the right direction.

“The investor-state dispute settlement mechanism (ISDS) is a massive Trojan horse, which could be used by multinational corporations to whittle away EU standards and regulations across a range of policies from the environment to food safety to social protection,” said MEP Yannick Jadot, the Greens’ trade spokesperson in the European Parliament.

“This announcement by the European Commission is an important development in the ongoing battle against the controversial EU-US trade negotiations. However, it is only a first step.”

In recent months, union and environmental groups called on the EU and United States to exclude ISDS.

“For months consumer organisations and other civil society groups have voiced their concerns over investor-to-state dispute settlement. Calling a halt to this part of the negotiations is the right thing to do. More is needed. The public should be consulted on other aspects of TTIP too. A deal of this magnitude should always include as broad a range of civil society as possible,” said Johannes Kleis, a spokesperson for the European consumer organisation BEUC.

The next round of negotiations are scheduled for mid February in Washington, when tariff barriers will be discussed.

The next EU-US summit will be held in Brussels on 26 March 2014. This will be President Obama’s first visit to Brussels and to the EU institutions.

The talks are expected to be suspended between mid-April and autumn 2014 because of the renewal of the European institutions.

The spokesman of the EPP Group in the international trade committee of the European Parliament, Daniel Caspary MEP, considered the announcement as the Commission’s will to better integrate the public into the TTIP negotiations.

“The announcement also provides a chance to make clear that many concerns are comprehensible but could be solved within the negotiation process.  Now all interested citizens, NGOs and interest groups are called upon to take part in the consultation, and reflect how to develop and implement agreements on the necessary protection of European investments abroad. This includes, in my perspective, provisions allowing lawmakers to continue taking meaningful decisions on rules, keeping intact ordinary legal procedures, and making more transparent international dispute settlement procedures."

Commenting on the announcement, Paul de Clerck from Friends of the Earth Europe, said: “This is a step in the right direction, and signals growing opposition to the investor-to-state dispute settlement mechanism. The excessive rights granted by this mechanism, which would allow companies to sue governments if they see their profits affected by democratically agreed decisions, are both undemocratic and unnecessary.”

"If the Commission is serious about genuinely consulting the public, on these so far secretive talks, then business should play no part. It must not use business statements in favour of investor protection as an excuse to put corporate interests before public interests," he added.