A series of draft proposals to protect Europe’s shrinking steel industry, to be published by the EU executive on Wednesday (16 March), shows estimates of Chinese over-capacity — a factor that can help support a case that firms are unfairly “dumping” products abroad — being revised down by close to 20%.

That revision, from 400 million tonnes in a draft early this month to 350 million and then 325 million in the most recent draft, was the result of Chinese complaints, said an EU official who spoke on condition of anonymity.

“The figures were revised after China challenged our data,” the official said after negotiators met in Beijing last week.

A European Commission spokeswoman declined specific comment on the drafts but said: “As matter of principle … this kind of data is not subject to any kind of negotiation. We do not check, consult or discuss our internal documents with any third parties. Instead they are based on publicly available figures.”

The European Union is keen to promote trade, investment and other relationships with China. But steel producers, backed by governments including the British, French and German, are pushing the Commission to do more to keep out cheap imports from Chinese factories that face problems of over-capacity.

Despite the imposition of EU anti-dumping duties on several Chinese producers, European competitors, whose remaining output is just 170 million tonnes a year, blame China for the loss of 20% of EU steel jobs since 2008, and fear more closures.

The Commission plan, to be issued after Wednesday’s weekly meeting of the 28 commissioners, proposes a number of measures to counter what the draft documents describe as more than a doubling of Chinese imports in three years.

The proposals include a “prior surveillance system on steel products”, a protective mechanism to be triggered if imports rise sharply, higher anti-dumping duties, and a faster system of imposing penal tariffs on unfairly cheap imports.

The proposals may disappoint some in the industry and their government supporters. France wants the inquiry period before the imposition of provisional sanctions to be cut from nine months to two. The Commission drafts do not specify the period.

The draft says other EU trade defences may be bolstered if China is recognised by the executive as a “market economy” in December — something Beijing is pushing for and which European manufacturers fear will make it harder to penalise its products.

Backed by Britain, the Dutch presidency of the EU has turned a deaf ear to demands from the European Commission and some member states ― led by France ― to strengthen trade defence instruments against Chinese steel dumping.

Global steel prices are at the lowest level in over a decade due poor demand growth and structural oversupply. Consultants CRU estimate that some 700 million out of a total 2.3 billion tonnes of global steelmaking capacity is spare.

In 2008, the European Commission launched an investigation into imports of steel from China, South Korea and Taiwan, which European steelmakers have complained are being dumped on the market at below cost price, putting thousands of jobs at stake.

When the steel crisis hit Europe, seven member states (Germany, Italy, the United Kingdom, France, Poland, Belgium and Luxembourg) sent a letter to the Commission “to use every means available and take strong action" to respond to "unfair trade practices". 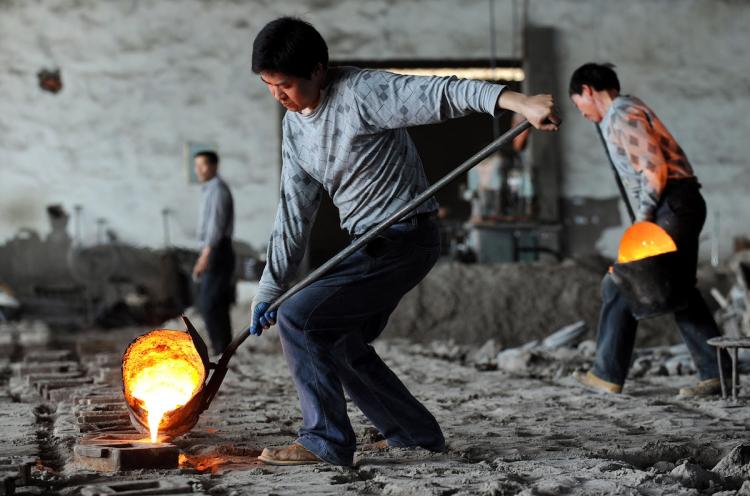 European Union ministers agreed a list of "concrete actions" to deal with the crisis facing the steel sector - but failed to agree on urgent measures that steelmakers are demanding to stem a flood of cheap imports from China which caused 5,000 job looses in the sector over the past three months.