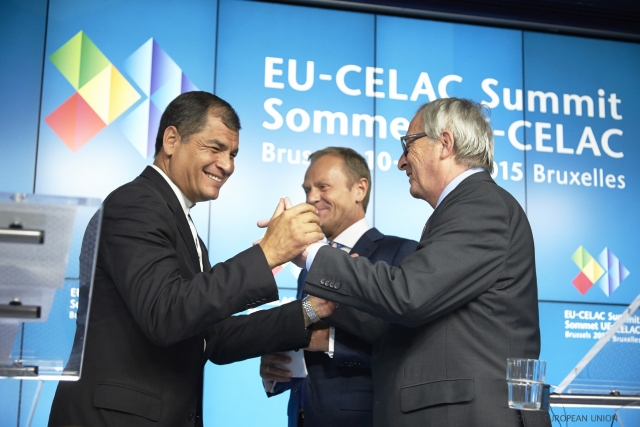 Unable to match China’s offer of $250 billion (€222 billion) in investment in Latin America, the EU sought ways on Thursday (11 June) to avoid being marginalised in the region, offering new trade deals, visa-free travel and deeper ties.

At a two-day summit with Latin American leaders in Brussels, European leaders briefly put aside concerns about Greece, Ukraine and Britain’s future in Europe to stress they had not forgotten former colonies.

“Europe and Latin America should also increase their trade.”

The European Union’s meeting with the Community of Latin American and Caribbean States follows China’s summit six months ago with the 33-country bloc, at which President Xi Jinping pledged $250 billion in investment over 10 years.

Struggling with the impact of a debt crisis that nearly broke up the euro zone, Europe has little fresh cash to invest.

Instead, it is opting to use its influence as the world’s largest trade bloc, gradually creating a patchwork of deals. EU officials said that as China’s demand for Latin America’s commodities lessens, Europe has a chance to reassert itself.

The EU agreed with Brazil to again try to unblock long-stalled talks with the South American trade bloc Mercosur, committing to exchange offers on opening up their respective markets by the end of this year.

Brussels will launch talks to deepen trade agreements with Mexico and Chile to reduce barriers to business. Ecuador is in the process of implementing a free-trade accord with the EU.

Other agreements at the summit included five Caribbean states winning visa-free travel to Europe, with Colombia and Peru next in line.

The EU and Brazil discussed plans for a $185 million (€165 million) undersea communications cable from Lisbon to Fortaleza to reduce Brazil’s reliance on the United States. Brazil wants to shield its Internet traffic from American surveillance. after Washington spied on Brazilian President Dilma Rousseff’s phone and email.

Despite US sanctions on Venezuela, the EU avoided criticism of leftist President Nicolas Maduro, who is facing civil unrest and did not attend the summit.

“I believe that the future of Venezuela is in dialogue, democracy, freedom, and the respect for the law.”

Leaders from Europe, Latin American and the Caribbean met in Brussels on 10-11 June.

More than 60 heads of state and government have been invited to the Belgian capital to discuss how to improve trade relations with the EU.

It is the second-ever EU-CELAC summit to be held, two years after a similar meeting in Santiago, Chile.

The conference tackled the issues of climate change, investment, and the Colombian peace talks.

The theme of the event this year was “Shaping our common future: working for prosperous, cohesive and sustainable societies for our citizens.”

Talks on a free trade deal with a group of South American countries remain deadlocked. Mercosur is the bloc composed of Argentina, Brazil, Venezuela, Uruguay and Paraguay