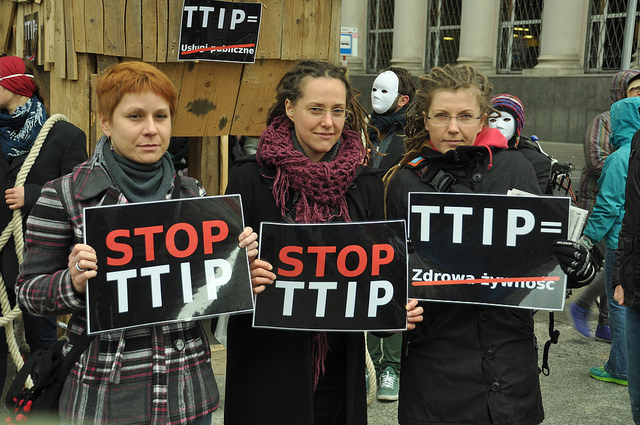 The EU’s negotiating team for pharmaceuticals, medical devices and cosmetics in the Transatlantic Trade and Investment Partnership (TTIP) met with civil society organisations inside the Commission on Wednesday (27 May) to defend the inclusion of the health sector in the trade deal.

In Europe, universal healthcare is a source of national pride, as well as a constant subject of debate. So, the inclusion of a healthcare chapter in TTIP has triggered heated reactions from health NGOs and trade unions, who are wary of an American-style liberalisation of a heavily regulated sector.

“We are also worried that the safety and efficacy of new medicines will be jeopadised by new deregulation proposals,” Hammerstein said. In his view, TTIP will strengthen corporate power over commercial confidentiality and lower the transparency of clinical data.

Fernando Perreau de Pinninck, head of the Commission’s Trade unit on Tariff and Non-tariff Negotiations and Rules of Origin, rebutted those claims, saying TTIP would be “neutral” when it comes to health policies.

“The objective is to look at where we can cooperate and achieve outcomes in the areas of our interest. We will always at the very least provide protection of our regulation, but normally the consequence will be that whenever there is an alignment in the regulation, the Commission will make sure that a product is totally complying with domestic legislation,” Perreau de Pinninck said.

Some health NGOs expressed concerns that TTIP could favour the private sector over public health services. But Commission officials said this was a matter to be addressed at the national level.

“Let’s not put issues into TTIP which are not part of TTIP,” said Marco Dueerkop, deputy head of unit covering services at the Commission’s DG Trade. “It’s very much up to the member states which sectors they want to open up to the market and this reflects societal choices,” he added.

“It will not impact the question on whether we want the private sector to play a bigger role in the health sector,” Dueerkop continued saying. “Every second week we discuss with the member states which exemptions they want to have in the area of health which reflect the political decisions in the member states.”

Sebastien Goux, a policy officer at the Commission’s health unit covering medicinal products, argued that TTIP gives the EU an opportunity to deal with a small number of targeted areas where the US does not offer the same level of protection.

In the US, the Food and Drug Administration (FDA) has been slower in approving some new cancer drugs and medical devices than the European Medicines Agency (EMA).

However, some fear TTIP could undermine the European healthcare model.