In January, the EU executive stopped trade negotiations with the US on the ISDS mechanism. It launched the online consultation in March after widespread criticism of the clause, which will allow EU and US based corporations to directly sue governments at international tribunals.

The online consultation sparked “very substantial interest”, the Commission said. More than 99% of the 149,399 replies came from individuals, with a particularly large number submitted in collective actions by civil society organisations.

The Commission said it would analyse the replies before it explained the next steps it would take.  That is unlikely to happen before November, it added.

The recent public consultation into the review of EU copyright rules, which closed in March this year, only had about 9,500 replies. More than 11,000 messages to a dedicated email address were also recorded. The Commission said it had “generated broad interest”. In a press release on Friday (24 July), the executive said it was, “one of the highest response rates ever for a Commission consultation”.

A 2013 public consultation, lasting three months, into whether the EU should regulate fracking – the extraction of shale gas – generated 22,000 replies, a figure dwarfed by the TTIP response. 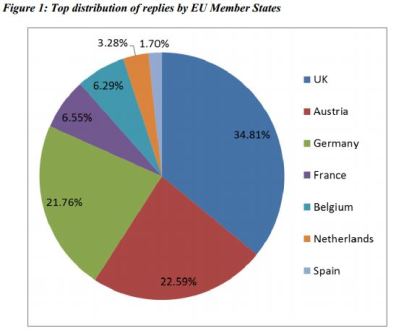 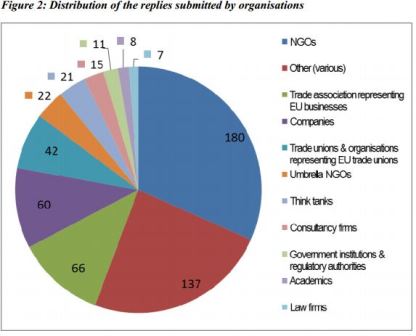 Distribution of replies by organisations [EC]

738 respondents, 0.5% of the total replies from businesses and individuals , admitted they had made an investment in the USA.

More than half of the respondents (79,444) refused to allow their contribution to be made public on the Commission’s website. But 91.39% of the organisations and 39.37% of individuals agreeing to the publication of their reply, also agreed to their name being published with the contribution.

The preliminary findings were released last night by the Commission. It follows last week’s sixth round of negotiations over the landmark free trade agreement in Brussels, which were greeted with protests.

#ISDS in #TTIP public consultations: stats and the next steps here: http://t.co/uNGGz4t8Li

The consultation was built around twelve issues, including the scope of the investment protection provisions, transparency in ISDS, multiple claims and relationship to domestic courts, ensuring consistency of rulings and the appeal mechanism,  and reducing the risk of frivolous cases.

Unions, environmental groups and MEPs, including Bernd Lange, the German Socialist Chairman of the European Parliament’s trade committee, have called for ISDS to be dropped from TTIP.  Former Spitzenkandidat Ska Keller has called for the talks to be dropped altogether (here).

They argue that ISDS could be used by multinational corporations to bypass national courts and whittle away EU standards and regulations across a range of policies from the environment to food safety to social protection. The talks have also been dogged by accusations of a lack of transparency.

Since then, a new European Parliament has been formed which is markedly more Eurosceptic than the previous one and more likely to oppose free trade.

One response to “Commission swamped by 150,000 replies to TTIP consultation”