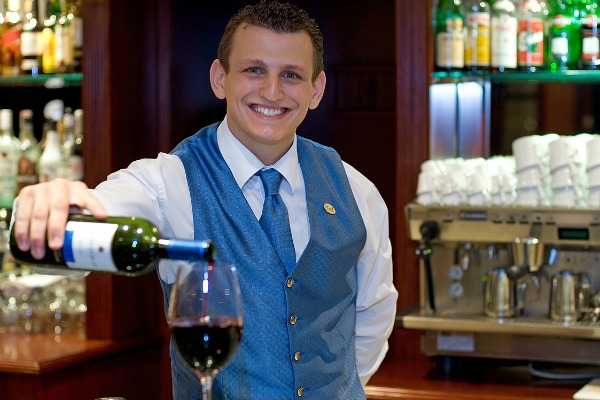 The hotel and bar sector in Europe has continued to create jobs across the continent, in particular among under-35s, despite the raging economic crisis, a new report shows.

A new study on Europe's hospitality sector shows a growth in employment throughout the first years of the economic crisis.

While average employment in EU member states dropped dramatically after the crisis hit Europe in 2008, the sector continued to create jobs at the same rate as previous years.

The study was conducted by consultancy giant EY (formerly known as Ernst & Young) and commissioned by the European organisation for the hospitality sector Hotrec and the Brewers of Europe.

Speaking at a launch event of the report yesterday (17 September), John Hopes of EY, who authored the study, said: “Hospitality is a major contributor to European economies. It contributes to the economy through excise duties, VAT taxes and employment especially.”

Hotels, bars and restaurants account for 3.7% of European GDP, the study said.

Some 10.2 million people are employed in the sector across Europe, the report said. If the jobs created indirectly in supply chain industries or supporting sectors are added, the figure reaches the 16.6 million jobs.

Hotels, bars or restaurants account for 7.8% of all jobs in Europe, and over half of those employed are under 35.

Conservative British MEP Emma McClarkin said: “The EU says it wants more jobs and growth, and this [sector] is where it is happening.”

Though industry representatives and supporters call for measures to sustain the industry, clear policy initiatives are difficult to pinpoint. Hotrec spokesperson Kent Nystrom said that “a favorable legislative environment needs to be in place to keep tourism flourishing,” while admitting that “a strong pan-EU policy initiative will be difficult”.

McClarkin has a few ideas.

“Member states should look separately at how to handle this, but the EU can nevertheless support these growing businesses and startups,” McClarkin said. “We must create the right circumstances to get young people those jobs.”

Lukáš Veselý, assistant at the cabinet of employment commissioner László Andor, stressed the importance of labour costs, which could ease pressures on the hospitality sector. “What we emphasized in the 2012 employment package is the real need to reduce the tax wedges and tax pressures on low-paid labour.”

The Commission often focuses its growth and jobs efforts on sectors that fit into its innovation strategy, Veselý said, but “we should not forget about the sectors that create the jobs today. It is a good moment to boost investment in small and medium enterprises.”

The report comes as a number of countries have launched initiatives to raise excise duties on alcohol, as part of an effort to crack down on binge drinking or excessive consumption of alcohol.

In the UK, politicians have called for minimum pricing, spurring strong reactions from the beer, wine and spirits industry. The Netherlands, Italy, France and other European countries, have risen taxes on beer in recent years. Plans for further tax hikes have further irked the sector.

“Since 2008, a number of member states have raised their VAT on alcohol at least once,” Hopes said. 15 European countries have so-called tourist taxes which also weigh on the sector.

The EY report calculated that excise duties, VAT and employment taxes altogether contributed up to €126 billion to European national treasuries in 2010.

Hopes added that the efforts to reduce alcohol abuse were part of the impact on bars and restaurants, but so were efforts to boost tourism, austerity measures and other factors. “Often countries are not aware of the impact certain measures can have on the sector,” he said.

“The sector is highly responsive to economic changes: it tends to perform better than the rest of the economy at times of prosperity, but can be more quickly affected during down times.”

Europe is the world’s leading tourist destination, playing a key role in the development of many regions.

Between 2007 and 2013, directly targeted EU support for tourism under Cohesion policy amounting to more than €6 billion is planned, representing 1.8% of the total budget. 3.8bn is allocated for the improvement of tourist services, €1.4bn for the protection and development of natural heritage, and €1.1bn or the promotion of natural assets.

In addition, support for tourism-related infrastructure and services can be provided under other headings, such as innovation, promotion of small and medium-sized enterprises, information technology applications and human capital.