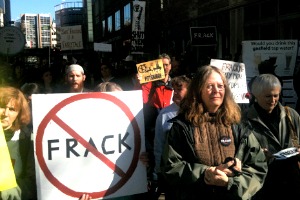 EXCLUSIVE / European bans on hydraulic fracturing – or fracking – for shale gas could face lawsuits under a far-reaching investment clause in a draft Canada-EU Trade Agreement treaty, seen by EURACTIV.

The document, dated 7 February, would establish a ‘fair and equitable treatment’ obligation that outlaws any “breach of legitimate expectations of investors,” according to text proposed by the EU.

These breaches could be triggered by changes to incentives or government policy, and environmentalists fear that bans on fracking by companies that claim to operate out of Canada might be caught in the net.

Pia Eberhardt, a spokeswoman for Corporate Europe Observatory, said if the text were adopted in the CETA trade deal, Europe’s democratic process could be corrupted by governmental fear of multimillion euro investor-state trade spats.

“Allowing for such disputes under CETA would empower oil and gas companies to challenge European fracking bans and regulations through the back door,” she said.

“The public would not only pay for the related environmental and health damages, but also run the risk of having to pay compensation to Big Energy when communities say no to fracking.”

Lone Pine argued that Quebec’s ban was “arbitrary, capricious and illegal,” as it had invested millions of dollars in obtaining permits to drill in Quebec before the ban was announced.

One international trade lawyer told EURACTIV that if a European government revoked drilling licences because of environmental concerns, they could be held culpable for violating the profit expectations of investors under the draft treaty.

“Consideration would have to be given to whether the bans or moratoria had been in place when the CETA entered into force,” said Nathalie Bernasconi Osterwalder, a senior international lawyer for the International Institute for Sustainable Development.

“But also, there are the questions as to how the moratorium was put into place. All kinds of issues would come up.”

Shale gas drilling has been heralded by many energy-intensive industries as a game-changer that could potentially allow European businesses to compete with their American counterparts on a fairer footing.

But European exploration for the unconventional fuel has been beset by geological, economic and regulatory obstacles.

Shale gas layers are on average 50% deeper in Europe than in North America, while production costs could be at least 40% higher, according to a recent KPMG report.

Questions over the greenhouse gas emissions associated with shale remain unresolved, with the International Energy Agency predicting that even the greenest exploitation of the fuel would raise global temperatures by 3.5-4 degrees Celsius.

Equally, unlike in the US, drilling companies are unlikely to benefit from blanket exemptions to environmental regulations in Europe.

One recent report by the EU’s environment directorate found that shale gas drilling posed a “high risk” to human health and the environment because of its potential to contaminate and deplete ground and surface waters, and degrade biodiversity, land, air quality and seismic conditions.

France and Bulgaria are among the countries that have banned shale drilling because of such concerns. Moratoriums on fracking have also been imposed in Romania, Ireland, the Czech Republic, Denmark and North Rhine-Westphalia in Germany.

Under the proposed treaty, companies launching suits against EU countries over drilling restrictions would not need to be strictly ‘Canadian’.

“You can’t just set up a mailbox in Canada and say you’re a Canadian company,” Bernasconi-Osterwalder explained. “You need some presence there. But you could still be a US company that has invested in Canada and then invests in the EU.”

The American tobacco company Philip Morris has sued Uruguay over ‘fair and equitable treatment’ codes, under a treaty between Montevideo and Switzerland. It also sued the Australian government under a 1993 Hong Kong-Australia investment treaty.

“The lines of company nationality are very smudged,” Bernasconi-Osterwalder said.

Ottawa is reportedly close to signing the €21-billion CETA deal with Brussels, but EU officials frustrated with slow progress in the talks have begun shifting their attention elsewhere.

An alliance of Canadian and European groups, including the European Trades Union Federation, is calling for it to be scrapped.

Canada has previously linked the deal to EU plans to label fuel from the country’s tar sands as high-polluting.

It is mined via hydraulic fracturing, or ‘fracking’, the process of breaking apart layers of shale by pumping liquids and a number of chemical additives under high pressure thereby releasing trapped gas reserves.

To proponents, shale gas represents an untapped and welcome alternative energy source to traditional fossil fuels. At the moment the continent depends on gas imported from Russia, and disputes between that country and Ukraine have disrupted winter supplies in recent years.