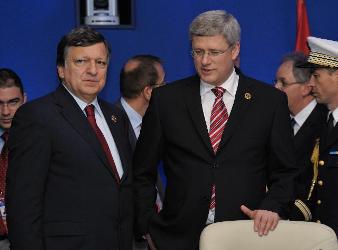 The European Union and Canada are expected to close negotiations on a multi-billion-dollar trade deal tomorrow (18 October), if they can overcome final disagreements ranging from medicine patents to feta cheese and integrate two of the world's biggest economies.

Canadian Prime Minister Stephen Harper and European Commission President Jose Manuel Barroso will meet in Brussels to wrap up talks that were launched in 2009 but which stalled early this year over demands for greater access to each other's markets.

"The negotiations have really moved forward, which means that the two leaders will meet tomorrow with the aim of concluding," Commission spokesman Olivier Bailly said. Harper was due to fly to Brussels later on Thursday.

Harper and Barroso are set to announce the deal – the EU's first with a member of the G7 club of major economies – at a news conference, if they can agree final issues including protecting Europe's distinctive geographically defined products such as feta and Gorgonzola cheeses.

A deal would be a political achievement for Harper's free-trade agenda and a step forward for the European Union as the 28-nation bloc seeks to agree a trade deal with the United States. That pact would be the world's largest, encompassing half the world economy and a third of world commerce

For Europe and Canada, the accord would also be one of a new generation of trade pacts that not only remove import tariffs but also harmonise rules on how companies do business across borders. An EU-U.S. deal would likely build on some of the agreements made with Canada to boost transatlantic business.

EU governments, the European Parliament and the Canadian provinces will still need to approve any EU-Canada deal.

With 95% of the deal done late last year, negotiations ran into trouble in February when EU Trade Commissioner Karel De Gucht was unable to clinch an agreement after flying to Canada.

Since then, EU and Canadian officials have worked behind the scenes to break the impasse. Harper and Barroso have met three times, most recently at the G20 summit in St. Petersburg, to settle the most difficult issues including patents for pharmaceutical, dairy products, beef and access to public procurement tenders.

At the heart of the dispute is a Canadian demand to be able to export up to 100,000 tonnes of beef to the EU every year, while the EU wanted to double its exports of dairy products without high tariffs, as well as protecting Europe's geographical defined products like Greek feta.

People familiar with the talks said that such issues had now been solved, but exact details will still need to be finalised after a political deal between Harper and Barroso.

"There is still lots to be ironed out from a technical point of view, but the political differences look to be bridged to allow the deal to go ahead," said a person close to the discussions who did not want to be identified.

Canadian beef exports are effectively blocked by the EU at present because they contain hormones. Ottawa has argued it needs a larger quota of hormone-free beef for Europe to make production economically viable.

Beef-producing Irish and French farmers are unhappy with that, while Brussels also needs to leave quota space which the United States will seek under a future free-trade deal.

Ottawa and Brussels started negotiations to open up access to each other's economies in 2009 and a deal was supposed to be concluded by the end of 2011.

That deadline was pushed back to the end of 2012 but the two sides are still trying to resolve differences over how much beef Canada can export and how much freedom EU companies will have to bid for Canadian government contracts.