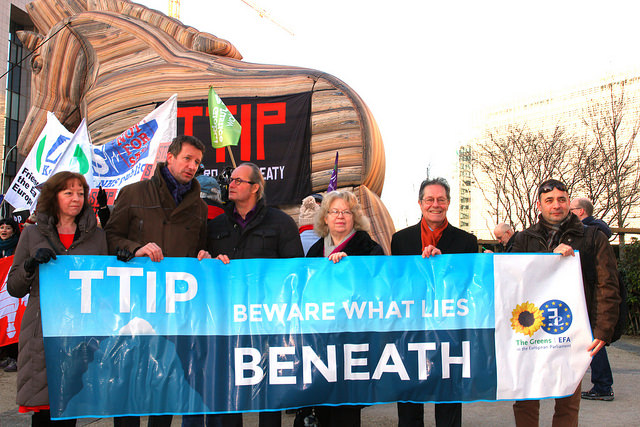 Paris has argued that the transatlantic trade deal should have to be approved by the EU’s national parliaments before it can take effect, not just the European institutions. EURACTIV France reports.

Matthias Fekl, the Secretary of State for Foreign Trade, has called for the European institutions to obtain the backing of national parliaments before signing the Transatlantic Trade and Investment Partnership (TTIP).

As negotiators prepare for the 12th round of TTIP talks on Monday (22 February), the crisis in French agriculture is compounding the sector’s fears over the trade deal. EURACTIV France reports.

As the 12th round of talks on the transatlantic treaty opened on 22 February in Brussels, the question of the agreement’s legal status has become a major point of contention in France.

Paris hopes that TTIP will be a “mixed” agreement, requiring ratification not only from the Council and the European Parliament, but also from all 42 of the EU member states legislatures. But this legal status is by no means guaranteed.

The EU’s free trade agreement with Canada (CETA) could be seen as a precedent for the future EU-US deal.

The provisional agenda of the Foreign Affairs Council to be held on 13 May this year includes “a decision on the signature of CETA”, which could lead to the “immediate application of all or part of the agreement, even in a so-called ‘provisional’ way, before national parliaments […] have even had the chance to validate or reject CETA”, the NGO Foodwatch wrote in an open letter to Fekl.

“Matthias Fekl and the French government must openly stand up against those who would force this deal through. As the possible entry into force of the CETA agreement without parliamentary consultation would be a “democratic coup d’état”, to borrow a phrase used by Fekl to describe TTIP,” said Karine Jacquemart, the director general of Foodwatch France.

The centre-right and the extreme left in the French Senate have joined forces to oppose the TTIP arbitration clause. France’s upper house unanimously adopted a resolution calling for the removal of the controversial text. EURACTIV France reports.

According to Commissioner Malmström, “This is just one part of the discussion. We are in the process of wrapping up the legal details and the translation of the agreement, and the European Parliament is expected to vote on it by the end of this year or the beginning of next year.”

For France, regardless of which decision is reached by the Commission’s legal services, parliamentary validation is a necessity.

“France believes that CETA and TTIP are mixed agreements and that the French parliament should have the final say in their ratification,” Fekl stated.

“The secretary of state was very clear on the fact that if French MPs were to reject CETA and TTIP, it would be amount to a political rejection,” a Commission source told EURACTIV. And this would apply whatever the legal status of the agreements.

CETA, which was formally concluded between the EU and Canada on 26 September 2014, should be the object of a proposal from the Commission within the next few weeks. This proposal will then be put to the Council in the form of either a mixed agreement or an exclusive agreement.

EXCLUSIVE / The European Commission will not ask EU judges to decide on the legality of the investor-state dispute settlement (ISDS) mechanism in free trade agreements such as the Transatlantic Trade and Investment Partnership (TTIP).

“The legal services of the Commission are certain to put CETA forward as an exclusive agreement, because that is how the previous free trade agreements with South Korea, Peru and Colombia were interpreted,” our Commission source said.

But an absolute majority of member states can reject the proposal and force the Commission to re-table it as a mixed agreement. “This is what has happened in other recent trade agreements” the source confirmed.

This situation may well arise for CETA. But for TTIP, the dispute between the EU and member states over the mixed character of the trade agreement should be settled by the European courts.

By the end of this year, in a ruling on the EU-Singapore trade deal, the Court of Justice of the EU (CJEU) will give its opinion on whether trade agreements are an exclusive competence of the EU or a shared competence with the member states.

“The legal clarity that the opinion should bring [will allow] for a quicker adoption of those future trade agreements that fall entirely within areas of EU competence,” the Commission stated.

This legal development will come too late to apply to CETA, but will serve as the basis for a decision on TTIP.

If the treaty is signed, it will affect almost 40% of world GDP. Commercial relations between the EU and the United States are already among the most intense in the world, with an exchange of goods and services equivalent to €2 billion each day.