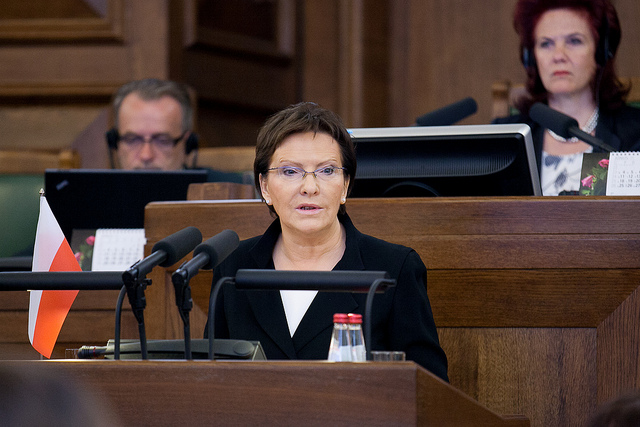 Germany and Poland are seeking closer economic cooperation and stronger ties on energy policy, an area that is especially sensitive for the two partners. But government consultations in Warsaw were more difficult regarding minimum wage issues. EURACTIV Germany reports.

Hopes for greater cooperation were the main result of German-Polish government consultations in Warsaw on Monday (27 April).

This engagement also makes it possible to solve difficult issues at the European level, she said at the press conference following the consultations.

There is high degree of agreement on topics like climate protection and the European budget, the centre-right politician pointed out.

The meeting also served as preparation for the Eastern Partnership Summit expected to take place in May in Riga. While the Chancellor spoke with Polish Prime Minister Ewa Kopacz, ministers from both countries exchanged views.

Germany is the destination of one-fourth of Polish exports and supplies more than one-fifth of its imports. Trade volume between the two countries has increased six-fold since 1995, said German Economic Affairs Minister Sigmar Gabriel, in Warsaw.

This success should be continued, he said. Both countries hope to strengthen their cooperation on energy policy, planning to initiate a working group to regularly coordinate on policy issues.

Gabriel and his Polish colleague, Janusz Piechonscinski, made it clear they would promote better framework conditions for industrial firms. Here, they said a “secure and affordable energy supply” plays an important role.

While Germany focuses on expanding renewables through the Energiewende, Poland continues to depend on coal and is considering building a nuclear power plant.

Meanwhile, the impact of Germany’s minimum wage has on the European shipping sector was a more difficult topic, Kopacz indicated at the press conference. Polish truck drivers are fighting the regulation because they fear for their own existence.

For weeks now, there have been attempts to solve this issue, Kopacz said. “Our ministers have met several times during this period. Today our ministers, who work together intensively, said that they had had repeated discussions, at least telephone discussions, over the past few days,” Kopacz stated, without being any more concrete.

At the end of March, Polish truck drivers protested against the German minimum wage with with road blocks. The shipping workers accused the German government of infringing upon EU law.

Shippers from Austria, Poland and Hungary have raised a constitutional complaint against the measure. The complaint was submitted to the German Constitutional Court on 11 March.

On 1 January 2015, Germany became the 22nd EU member state to introduce a minimum wage. The European Commission is currently investigating the country’s implementation of the minimum wage for cases such as truck drivers passing through Germany on transit routes from other EU member states. The Federal Republic is being accused of creating excessively high bureaucratic hurdles and restricting freedom of competition.

The German government temporarily suspended the minimum wage regulation for truck drivers in transit at the end of January.

On 21 January, the Commission initiated a pilot procedure to determine whether applying the minimum wage to truck drivers in transit through Germany is compatible with EU law.

On 1 January 2015, Germany introduced a general minimum gross salary of €8.50 per hour.

Almost all EU member states - 21 of the 28 - have a legal minimum wage covering all sectors. The exceptions - besides Germany for the time being - are Denmark, Finland, Italy, Austria, Sweden and Cyprus.