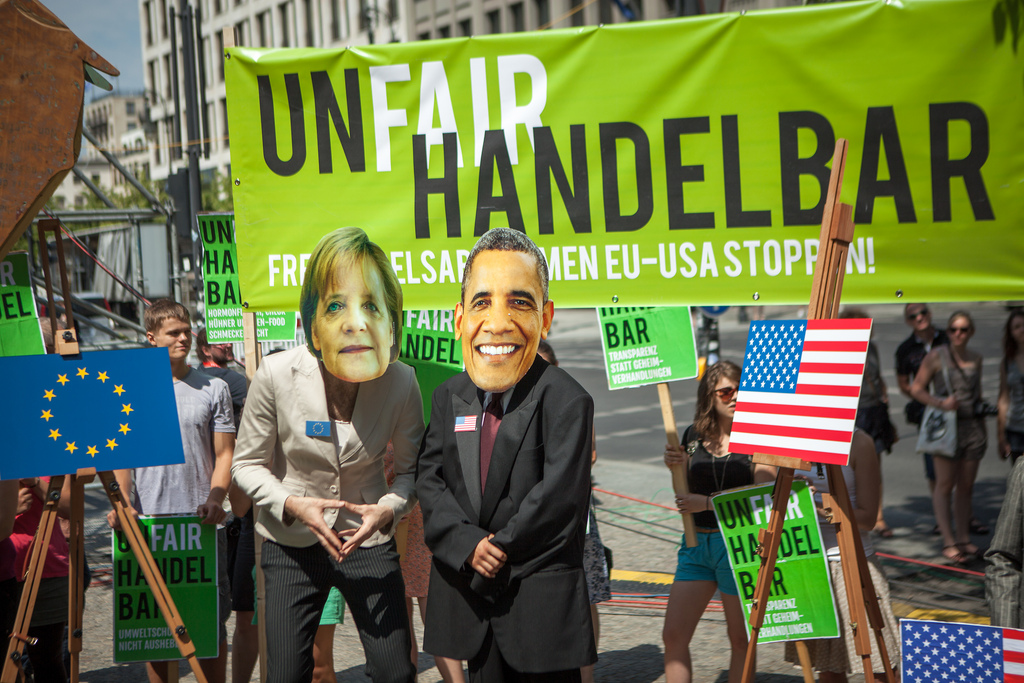 Top European lawmakers from Germany's Green Party leaked a confidential document last Friday (7 March) regarding talks over the Transatlantic Trade and Investment Partnership (TTIP), arguing that the disclosure is in the "public interest” and for the "protection of democracy”.

On Friday (7 March), high-ranking German MEPs from the European Greens leaked a confidential document from the Council of Ministers regarding the ongoing TTIP negotiations.

“TTIP threatens to take away democracy’s means for social and environmental management of the internal market,” Green MEP Sven Giegold warned, defending the decision to publish the document.

It is not the first time that the Greens have criticised the planned free trade agreement between the EU and US. But last week’s leak has added fuel to the fire.

Published on its very own webpage, the German language leak contains guidelines for the EU Council of Ministers in negotiations with the United States. In addition, the page also contains more detailed comments made by the Greens regarding specific paragraphs in the Council document.

Still, the wording of the 18-page document is rarely concrete. Giegold admitted that the mandate seemed surprisingly positive at first glance. But anyone who is accustomed to “bureaucratic German”, he said, would quickly recognise that TTIP amounted to an “ambitious and comprehensive opening of the market”.

TTIP to ‘deprive’ parliaments of their power

The most detailed paragraphs are related to investment protection, which the Greens address with clear criticism. ”Investors and company groups are to be protected and receive their own special litigation rights – people and the environment take a back seat!”

In the Council document, it says, ”The agreement should create an effective mechanism for settling disputes between the investor and the state […].” This arbitration should uphold “just and fair treatment, including the prohibition of disproportionate, arbitrary or discriminatory measures”.

The Greens rebuke passages in the text that they find particularly woolly, warning that future “investment lawyers in secret arbitration tribunals would be able to determine what is interpreted under “just and fair” treatment – not the parliaments, public authorities or courts.

“It cannot be emphasised enough, that international courts of arbitration – in which companies, for example, attack environment laws or labour rights – can deprive the parliaments in Europe of their power,” Giegold said.

Reacting to the release of a new study, Ska Keller, one of the top candidates for the European Greens in the upcoming EU elections, warned that TTIP could clear the way for oil and gas companies to claim billions in damages over bans and strict regulations on hydraulic fracturing.

“With TTIP, companies acquire far-reaching litigation rights against environmental and social standards. That is not acceptable”, Keller said.

Breaching the taboo to ‘protect democracy’

The ongoing TTIP negotiations are subject to secrecy and Giegold is well-aware that he has breached a taboo by leaking the document. He justifies his decision in an interview published on the German Green Party website.

“There is a significant public interest in TTIP; a transatlantic trade agreement could wall in our democratic sphere of influence at its heart. For that reason, I decided to publish the confidential mandate,” said Giegold.

“For me, protection of democracy carries a greater weight than the Commission’s interest in undisturbed and secret back-room negotiations,” the Green MEP emphasised.

The Greens accuse the European Commission of purposefully conducting negotiations without involving the public. “While civil society stays outside, big industry lobbyists have privileged access. Mutual recognition or harmonisation of standards under these conditions threatens to become a serious case of environmental dumping. Isolated acceptance of genetically modified corn varieties could cause a break in the dam. Even importing of antibiotic contaminated meat would not be preventable anymore.”

On Monday (10 March), the fourth round of TTIP negotiations between the EU and the US began in Brussels. As a public reaction to criticism regarding the secrecy of negotiations, in January, the EU suspended talks over company investment protection for 3 months.