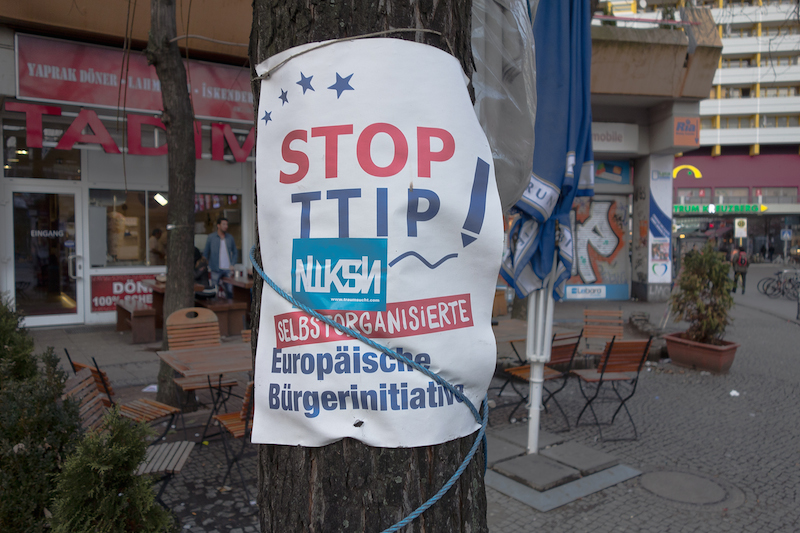 The European Union won’t decide whether to include the investor- state-dispute-settlement (ISDS) clause in the Transatlantic Trade and Investment Partnership (TTIP) until the “final phase of the negotiations” with the US.

ISDS is controversial because it allows investors to take governments to international arbitration tribunals rather than to domestic courts. It could be dropped, modified or kept in its current form, when the trade pact is finally sealed. The US wants ISDS included in the landmark free trade agreement

The European Commission will issue policy recommendations after further discussions early this year with member states, the European Parliament and other organisations such as NGOs, trade unions and business associations, Trade Commissioner Cecilia Malmström said today in Strasbourg (13 January).

The Council vote can be passed by a qualified majority, while a majority of MEPs must back the trade pact.

The executive pointed out that it was given a unanimous mandate by all EU governments to include ISDS in the free trade agreement, provided certain conditions were met.

While some national governments have railed against the clause, none have yet asked for the mandate to be changed to remove ISDS.

For ISDS to be dropped, EURACTIV understands that the negotiating mandate will have to be changed. That would not be possible without a qualified majority vote in the Council.

Those conditions were outlined in the TTIP negotiating mandate, handed to the Commission by EU governments. The documents were finally officially made public in October last year, after about 17 months of being freely available online.

The conditions for ISDS include that it:

The Commission was forced to take ISDS off the negotiating table in January 2014. It held a public consultation on ISDS, from March to July.

It attracted about 150,000 replies, the most the Commission has ever received for a consultation. The majority (88%) did not want the clause in TTIP.

70,000 of the responses were identical, a result of members of the public using online templates provided for them by NGOs, but EURACTIV was told they would still be taken seriously by the executive.

“we take every concern seriously” @EU_Commission on #TTIP. Will they listen to 130,000+ people who said no to #ISDS? http://t.co/IwpRislFZ3

The Commission today published its long-awaited analysis of the replies.

“The consultation clearly shows that there is a big amount of scepticism against the ISDS instrument,”  Malmström said today in Strasbourg.  But the consultation was not a referendum, she added.

EU countries already had 1,400 ISDS-type agreements with other countries, some dating back to the 1950’s, she said.

“Failure to replace them by more advanced provisions will mean they remain in force – with all the legitimate concerns they have been raising over the last months”, added Malmström.

The European Parliament’s trade committee, has already signalled its opposition to ISDS in TTIP.

And trade unions criticised yet another round of consultation on the clause.

Pieter de Pous, European Environmental Bureau’s policy director and member of the EU’s TTIP advisory group, said, “The EU and US have well-developed legal systems which have more than adequately handled foreign direct investment until now. ISDS would only lead to the erosion of laws that deliver public benefits, notably those that protect consumers’ and workers’ rights and the environment.”

“The European Commission would never even consider an agreement which would lower our standards or limit our governments’ right to regulate. Neither would EU Member States, nor the European Parliament”, said Malmström in the release.

Markus J. Beyrer, director general of trade association BusinessEurope said, “We welcome the efforts of the European Commission to respond to critics on ISDS and to find ways to ensure a proper balance between investors’ rights and States’ right to regulate. We believe TTIP offers the right platform for the EU and the US to agree on a 21st century investment chapter that includes ISDS.”

A group of US and EU business associations and think-tanks issued a joint statement, saying that, “The inclusion of ISDS in TTIP is crucial as it will provide the means to enforce these principles via a neutral, fact-based and apolitical form of dispute settlement.”

Jos Dings, Transport & Environment's director and member of the EU’s TTIP advisory group, said: “Despite the overwhelming call on the Commission to drop ISDS, it has obscured the true extent of opposition in order to ram through its agenda to reform the unreformable. Commissioner Malmström wants to make a fresh start on trade but she has just made a false one.”

Paul de Clerck, trade campaigner at Friends of the Earth Europe, said: “The European Commission is showing its total disregard for the voices of people who mobilised en masse to express their opposition to VIP treatment for investors in the EU-US negotiations. Today’s announcement is yet more evidence that the TTIP negotiations are a dangerous Trojan horse driven by corporations at the expense of essential protections for people and the environment.”

Marietje Schaake MEP, ALDE spokesperson for TTIP, said, "h We need a roadmap for ISDS because not only is this an issue within TTIP, European member states already have more than 1,300 bilateral agreements which contain ISDS. Even without ISDS in TTIP, these outdated types of ISDS will remain. It is clear that the concerns about this old-fashioned form of ISDS are shared by both citizens and companies.”

GUE/NGL MEP Helmut Scholz, shadow rapporteur on TTIP, said, "Citizens, trade unions, local and regional governments and small and medium-sized companies do not want special courts for corporations to bring cases against individual sovereign states. The record 150,000 responses to the Commission's questions shows just how important this issue is for people.

"But despite this clear public disapproval of ISDS, the Commission's report worryingly concludes that there are only four aspects of ISDS which need to be improved. It would be a serious mistake for the Commission to ignore citizens' opinions. The report clearly indicates that the ISDS mechanism is perceived as a threat to democracy and public finances. The Commission should now act to reflect this significant call from citizens and immediately throw out the ISDS."