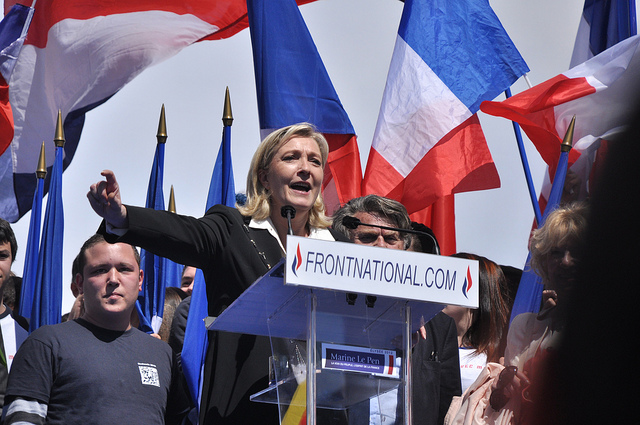 Le Pen at a 1 May 2012 National Front meeting. Her motion on TTIP is expected to be blocked by MEPs tomorrow. May 2012. [Blandine Le Cain/Flickr]

EXCLUSIVE/ The European Parliament’s trade committee will quash a motion filed by Marine Le Pen and her far-right allies for more transparency in talks over the Transatlantic Trade and Investment Partnership (TTIP).

While there is support for more transparency about the EU-US trade talks across the political groups, MEPs are unwilling to bolster Le Pen’s profile by backing the motion, EURACTIV has learnt.

Each of the five political groups in the committee has a coordinator. Those coordinators will discuss the motion in a closed meeting on 24 September.

For the motion to go forward, there must be support from the majority of the coordinators, which will not be forthcoming. Because Le Pen, who is a member of the committee, failed to form a parliamentary group after May’s European elections, she doesn’t have a coordinator to rely on.

But groups including the Socialists, European Conservatives and Reformists, the European People’s Party, will kill the bill, a source told EURACTIV. “The motion will be shut down by the coordinators. No one is interested in giving them a platform,” the source said.

Another said, ‘’It is extremely unlikely this will get the support it needs.’’

”I don’t think there is any chance of a majority,” added a third.

The move highlights the difficulties the far-right, which enjoyed large gains across Europe in the elections, will face in influencing EU policymaking.

The failure to form a group, and the traditional parties’ reluctance to be associated with them, has left the Eurosceptic far-right isolated in the new Parliament. Had she formed a group, Le Pen would have been able to table motions directly to plenary, without going through the committee.

Le Pen is also not entitled to have a shadow rapporteur overseeing bills before the committee, as parliamentary groups do.

On the campaign trial, Le Pen promised she and her MEPs would fight TTIP, a landmark trade deal that supporters claim will boost Europe’s economy by about 0.5% of GDP.

“The numerous representatives that we will send to the European Parliament will lead the battle against TTIP,” she said in February.

But in July, Bernd Lange, the German socialist who chairs the trade committee, told EURACTIV Le Pen would not be allowed to grandstand in the committee.

“I am not concerned about any member of the committee trying to hijack a debate. We have clear procedural rules which govern our committee work and we will abide by them,’’ he said.

The motion itself appeared more informed by newspaper reports over TTIP than by the ongoing discussion between Parliament and Commission, sources said.

It brands the ‘’blatant lack of transparency’’ of the TTIP negotiations ‘’inadmissible’’ and calls for immediate access to negotiating documents.

Transparency has been a major issue raised by MEPs and NGOs during the trade talks. The European Commission, which is handling negotiations, has said they are the most open ever held.

It publishes some documents on a dedicated website, and points to the fact that more information is shared with the committee than is required by the Lisbon Treaty ,as evidence of its commitment to transparency.

The executive shares its negotiating documents with members of the committee, but the US will not release all their papers to MEPs.

Reading rooms of consolidated texts of EU and US documents, passed by the US side, have been set up. MEPs must promise to keep details confidential and hand in their mobile phones and laptops on entry.

Le Pen’s motion points out that TTIP has raised concerns and objections on social welfare, the environment and health. It also argues that the clause on investor-state dispute settlement (ISDS) will “undermine the sovereignty of member states.”

In January, the EU executive stopped trade negotiations with the US on the ISDS mechanism. The clause will allow EU and US-based corporations to directly sue governments at international tribunals.

An online consultation on ISDS drew almost 150,000 replies, and the Commission is reviewing the submissions before deciding on its next move.

The motion can be withdrawn by Le Pen and her allies before the coordinators decide whether to ignore it, draw up a report on it, write a parliamentary opinion on it, or combine it with other motions or resolutions.

The coordinators can choose not to support the motion or just take note of it. Both options will stop the resolution being take further.

Once a decision is adopted by a vote in the committee, only the committee has the power to withdraw it before the opening of the final vote of the Parliament.

EURACTIV has asked Le Pen’s Brussels office for comment and will update this story if a response is received.

The committee meets tomorrow (3 September) to hear from Italy’s Vice-Minister for Trade Carlo Calenda, who will discuss the Italian Presidency of the EU’s priorities in international trade. There will also be an exchange of views on TTIP with US Ambassador to the EU Anthony Gardner.

The European Parliament will ultimately have a veto over the final TTIP agreement. Observers including Gardener believe that the free trade deal has enough support to pass in the plenary vote, once negotiations are finished.

Negotiations between the US and the EU on the Transatlantic Trade and Investment Partnership (TTIP) started in July 2013. Since then there have been European elections, which saw a rise in support for far-right parties such as France's National Front, and a new European Parliament has been formed.