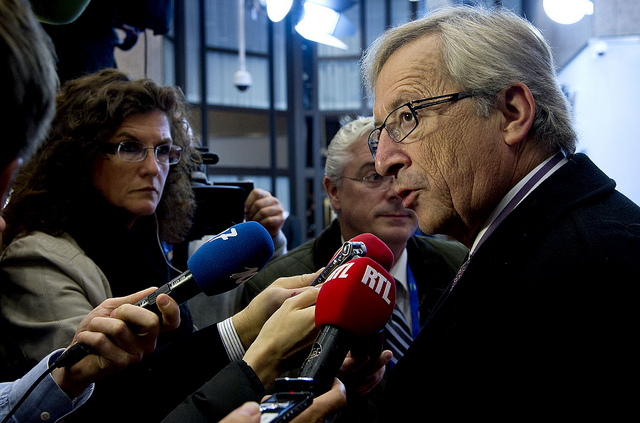 Juncker has faced questions over his role in the Luxleaks scandal. [European Council/Flickr]

The European Union is expected tomorrow (21 October) Wednesday to decide against Fiat and Starbucks in a landmark tax avoidance case for the 28-nation bloc, sources close to the matter have said.

The decision, if confirmed, could mean that Fiat’s financial arm, based in Luxembourg, and the European unit of US coffee-shop outlet Starbucks in the Netherlands, have to repay millions of euros in backdated taxes.

The sources, who asked not to be named, said EU Competition Commissioner Margrethe Vestager will likely make the formal announcement Wednesday.

“She is the one with the news this week,” one source said.

The European Commission, the EU’s executive arm, has launched a series of tax probes against top companies, including US technology giants Apple and Amazon, and Wednesday’s decision would be a key indicator of how those cases may go.

Taking on Apple and Amazon would come at a sensitive time for EU-US business ties and as Brussels and Washington negotiate a huge free trade pact amid deep suspicions in Europe that Brussels may give too much away to get an agreement.

It would follow hard on the heels of a decision by the EU’s top court to reject a transatlantic personal data pact that risks derailing the business model of Silicon Valley companies operating in Europe.

Vestager is also caught up in a bitter anti-trust fight with Google which the EU accuses of abusing its dominant market position to promote its own services.

The EU’s four tax probes were announced last year in the wake of the LuxLeaks affair which revealed that some of the world’s biggest companies had negotiated lower rates, in some cases just one percent, in secret pacts with Luxembourg.

The revelations were a huge embarrassment to Jean-Claude Juncker, then-newly installed as Commission head after serving nearly 19 years as Luxembourg prime minister.

Luxembourg says the tax rulings, as they are known, were not illegal and the companies involved insist they fully comply with the tax laws where they operate.

The Commission bases its case however on EU competition law, arguing that such sweetheart tax deals give the companies involved an unfair advantage over their rivals.

Fiat and Starbucks were not immediately available for comment.

With 45 members and the same number of substitutes, the TAXE Committee's role is primarily to investigate the compatibility of tax rulings with the rules on state aid and tax law. The special committee will then draft a report, including recommendations on how to improve transparency and cooperation between member states to the benefit of the internal market, European companies and citizens.

Luxembourg has faced international criticism following the revelations. The leaks put pressure on European Commission President Jean-Claude Juncker, a prime minister of Luxembourg, to explain his role in the country's tax policies.

0 responses to “Luxleaks tax case could tee up TTIP fight”