Malmström: Only minor adjustments to ISDS in trade deal with Canada 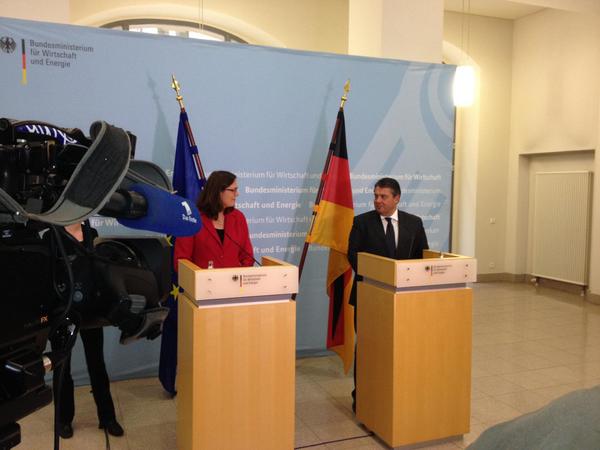 Only small changes can be made to an investment protection clause in a trade pact between Canada and the European Union, European Trade Commissioner Cecilia Malmström said on Monday (10 November).

“There can be minor clarifications and adjustments,” she told a news conference in Berlin with German Economic Affairs Minister Sigmar Gabriel.

Gabriel added that the investor protection clause in the EU-Canada Comprehensive Economic and Trade Agreement (CETA) could not be changed totally.

“It will not be possible to take the dispute settlement procedure out of CETA. We are acting in a European context and must listen to the views of other countries,” Gabriel said after the meeting with Malmström. He said “improvements” and “changes” are expected to take place in the next few months.

The clause is disputed because it would allow companies to take cross-border legal action against governments. Malmström indicated that the Commission would make any changes in the most transparent way possible so that CETA can be successfully ratified in the member states.

The Commissioner’s announcement is a response to criticism in many countries, including Germany. In September, Gabriel had said Berlin would not sign unless this clause were scrapped, refusing to accept investment protection agreements in CETA and TTIP.

As of yet, it is not clear what concrete changes will be made. Writing to the European Parliament in September, Malmstöm assured that special legal conditions for investor suits would not limit the jurisdiction of courts in the EU member states.

Economic and political negotiators hope the CETA agreement will create an additional trade volume of around €26 billion. In many ways the deal serves as a blueprint for the larger TTIP agreement between the EU and the United States.

During her hearing in the European Parliament in September, Commissioner Malmström flagged the possibility of designing “a new system that addressed all people’s concerns.”

Although she conceded that it would be a mistake to open up CETA negotiations for the disputed Investor State Dispute Settlement (ISDS), she said she will work towards finding a solution. “Whether ISDS will stay in TTIP, I don’t know, it is too early to say,” Malmström said.

In January, the EU executive stopped trade negotiations with the US on the ISDS mechanism. It launched the online consultation in March after widespread criticism of the clause, which will allow EU and US based corporations to directly sue governments at international tribunals. It received about 150,000 responses and the executive is still finalising the analysis of the submissions.

Critics of the clause are concerned over a lack of transparency in the settlement procedure. This could lead to private firms indirectly influencing politics by threatening with high damage claims, often with the intention of preventing or altering entire laws.

“If we had an international court to deal with ISDS that would be ideal, but we are not there yet,” Malmström said.

Gabriel said he also intends to wait for the results of the online consultation, repeating that the dispute settlement procedure is not necessary between states with a well-developed rule of law.

TTIP was also discussed during Gabriel’s recent visit to the United States in October. After a meeting with US Vice President Joe Biden, the German politician explained, “I have indicated that, in our view, there is no need for any special protection for investors.”

“We agreed that we must create more transparency in negotiations”, Gabriel continued. TTIP is not only about free trade in a strict sense, but also about the EU and the US setting common standards for global trade. He said he fundamentally supports such an agreement between the two trade giants.

In the runup to the meeting, four large industrial associations rallied for the preservation of the investor protection clause and investor-state dispute settlement procedure in the planned TTIP agreement.

“For decades” these have been “proven instruments for German companies, to secure their investments abroad” the associations said in a joint statement.

But in the statement, the associations expressed their approval of having investor protection measures undergo reforms. “A modern investor protection clause like this pays off. It can promote investments and serve as a yardstick for other agreements – and most definitely without undermining legal systems in the EU and the United States”, the statement continues.

Meanwhile criticism of TTIP and CETA remains strong in many EU countries. On 15 July, a European Citizen’s Initiative (ECI) was submitted, calling on the European Commission to cut off negotiations over TTIP and not conclude the CETA negotiations.

But the initiative, dubbed “STOP TTIP”, was rejected in September, causing over 290 citizen’s organisations to sue the European Commission before the European Court of Justice (ECJ).

The Commission defended its decision explaining, “as a matter of principle, the  signature  and  conclusion  of  an  international  agreement  with  a  given  subject  and content  may  be  requested  by  a  citizens’  initiative.  Conversely,  the  preparatory  Council decisions  authorising  the  opening  of  international  negotiations  or  repealing  such authorisation  do  not  fall  within  the  scope  of  the  Regulation.”

But TTIP opponents argue these arguments do not hold up. Critics fear CETA and TTIP will lead to diminished consumer protection standards and undermine employee rights.

Still, Gabriel and Malmström assured that the negotiating partners simply intend to break down tariff and non-tariff trade barriers – standards will not be reduced, they said.

3 responses to “Malmström: Only minor adjustments to ISDS in trade deal with Canada”