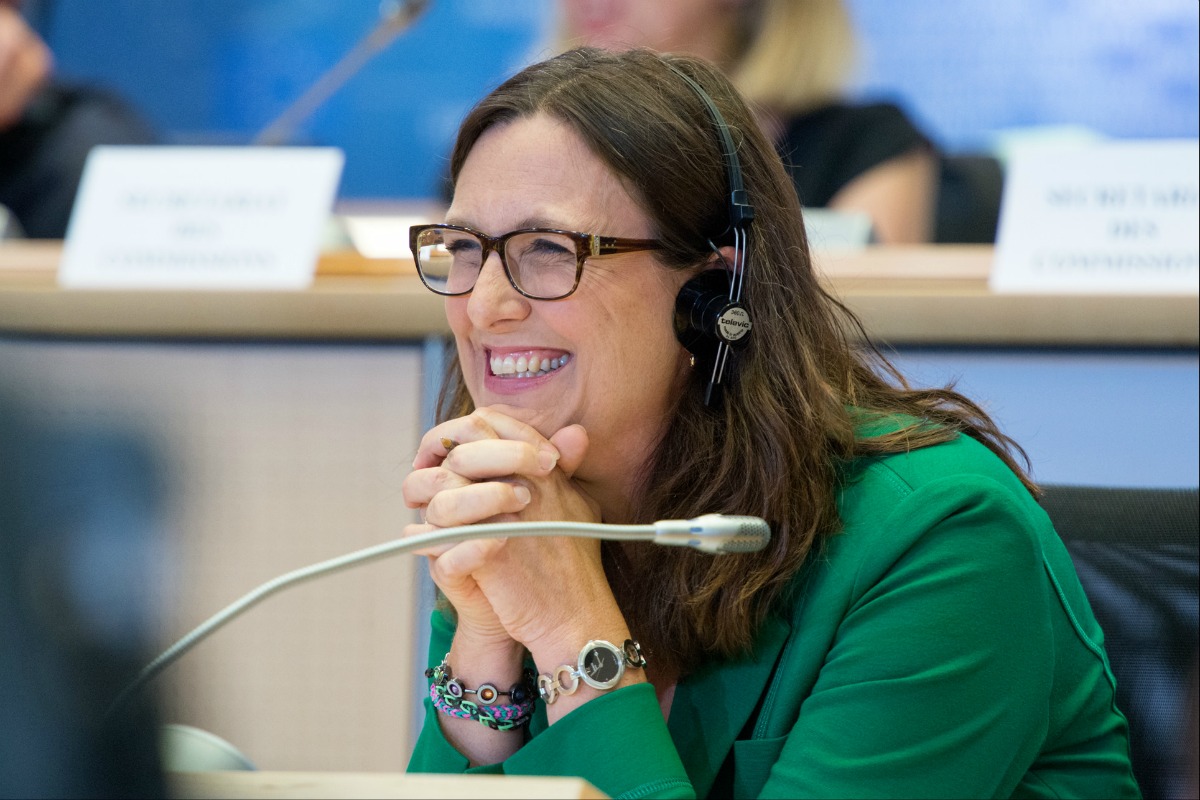 During a three-hour hearing in the European Parliament, Sweden’s Cecilia Malmström, the European Union’s Trade Commissioner-designate, has not impressed, but also not disappointed MEPs, despite failing to brush out a clear vision on how she intends to run her dossier.

Malmström started by raising the stake on trade but remained cautious not to fall into the trap of TTIP, the EU-US free trade agreement, which she said had toxic elements.

“In the future, trade will become even more important for European jobs and growth. As the world economy has become more connected, more and more people depend on trade for their livelihoods,” she said.

More than 10% of the EU workforce depends on external trade, making the EU is an attractive place for foreign companies and investors, she stressed. In 2013, the Union accounted for almost one fifth of global foreign direct investment (FDI) flows and has the largest stock of both inward and outward FDI worldwide, she argued.

“But that does not mean that open markets are an end in themselves,” Malmström warned, conscious of the criticism surrounding two trade deals – with Canada (CETA) and the United States (Transatlantic Trade and Investment Partnership –TTIP).

A seasoned EU politician, Malmström took the bull by the horns and went head on into the most sensitive area of her portfolio: TTIP.

“If there is an area where the next Trade Commissioner will need to be particularly vigilant, it is TTIP—it is our most demanding negotiations and is certainly the most debated by the public.”

Concerns put forward by consumer and environmental groups and others that the EU’s plan to create the world’s largest free trade area with the United States could undermine European standards on data privacy, food safety and the environment has rocked the negotiations, entering the 7th round this week in Washington.

“Over the last several years I have been following these important talks from a distance, I have been amazed by what I have heard,” the former Swedish MEP said, noting that a fresh start in the negotiations is needed.

She hit the right note with MEPs, calling for more transparency in the negotiation and promising to find ways of better communicating with them but also with national parliaments, and first and foremost with European citizens.

Malmström even suggested the use of citizens’ panels to bridge the perception gap on TTIP.

“I will seek to find the provisions to improve transparency but still maintain the confidentiality needed in these kind of the negotiations,” she told MEPs, adding that she wanted to include a greater number of parliamentarians in the exchange of views.

On substance, she said she was convinced that a common approach to health, environment, labour consumer safety and financial risks can be found. “It cannot be about lowering standards, but about avoiding extra costs – the costs entailed for example in the duplication of factory inspections and unnecessary divergences of approach,” she argued.

On the very controversial issue of including Investor State Dispute Settlement (ISDS), Malmström flagged the possibility of designing “a new system that addressed all people’s concerns.”

Although she conceded that it would be a mistake to open up CETA negotiations for ISDS, she said she will work towards finding a solution. “Whether ISDS will stay in TTIP, I don’t know it is too early to say,” Malmström said.

In January, the EU executive stopped trade negotiations with the US on the ISDS mechanism. It launched the online consultation in March after widespread criticism of the clause, which will allow EU and US based corporations to directly sue governments at international tribunals. It received about 150,000 responses and the executive is still finalising the qualitative analysis of the submissions.

“If we had an international court to deal with ISDS that would be ideal, but we are not there yet,” she said.

Bernd Lange, chair of the Parliament’s trade committee, approved the open tone of the commissioner and said she offered room to manoever.

Responding to a question on the precautionary principle, the Swedish commissioner-designate tried to reassure that whatever is not allowed in the EU will not be allowed to be imported.

The precautionary may be invoked when a product is suspected of having a dangerous effect on people’s health or the environment, subject to a scientific evaluation. The precautionary principle has been invoked for example with national bans on GMO cultivation.

In light of new developments, trade is an important part of foreign policy, the 46-year old Swede insisted.

Malmström will be working closely “with her boss” Federica Mogherini, the EU Foreign Affairs chief, she said, to advance Europe’s wider international goal of “promoting our values of peace, freedom and democracy throughout the world”.

“Trade is a powerful foreign policy tool,” she added.

On the burning issue of Ukraine and association agreement, signed in June, whose entering into force was postponed until 2016, after fierce opposition from Russia, the nominee said, “I will not, if I am confirmed, and the Commission will not, allow Russia to amend the agreement.”

Marietje Schaake MEP, of ALDE, welcomed Malmström's comments that she would focus on maximum transparency and increasing accessibility of trade negotiations. She said, "I am happy that Malmström shares my concerns. Too much takes place behind closed doors. Because of this, people's justified concerns cannot be addressed and stakeholders cannot effectively contribute to the process."

"We need to make sure that not only big companies, but also civil society and small and medium size enterprises can contribute to the negotiating process. The positive effects of trade agreements must be felt by European citizens, not only in board rooms," she added.

"Cecilia Malmström has wrongly come under fire from certain Groups in the European Parliament following her hearing yesterday. We do not need puppets and addressees of key words in the Commission but Commissioners who agree to take part in debate. After yesterday's remarks during the hearing, I find that the statement required by the Commissioner-designate on alleged incidents from the past boils down to nothing more than pure harassment. In today's letter to the Trade Committee she refuted the reproaches and settled it once and for all. I hope that we can now focus once again on an objective trade policy."