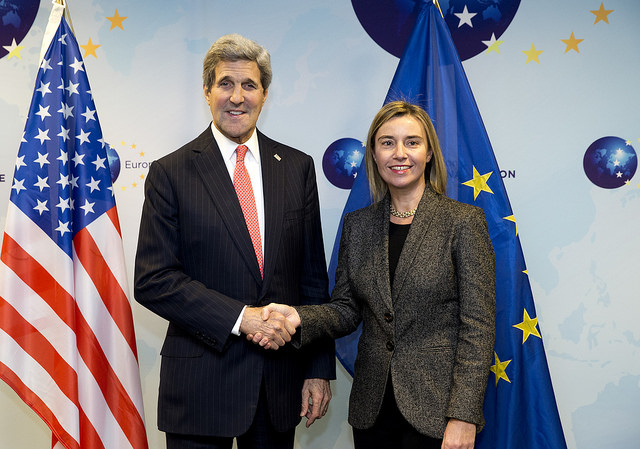 European Union foreign affairs chief Federica Mogherini yesterday (3 December) pushed for the inclusion of an energy chapter in the Transatlantic Trade and Investment Partnership (TTIP) during talks with US Secretary of State John Kerry.

The foreign affairs bosses met during the EU-US Energy Council. The meetings, the latest of which was held in Brussels, are part of a political, and practical, response to the Ukraine crisis.

Diplomats discussed measures to bolster EU energy security such as the “Freedom” floating liquefied natural gas (LNG) terminal in Lithuania, a new gas interconnection agreement between Finland and Estonia, and LNG terminals in Helsinki and Tallinn.

Diversifying routes and supplies of gas is vital to reduce the EU’s dependence on Russian natural gas. About 30% of the EU’s annual needs are supplied by Russia through Ukraine.  In 2009, Russia turned off the taps, causing shortages in the EU.

The Council agreed that energy security is also underpinned by “open, competitive and transparent international energy markets,” according to a press release.

Mogherini argued that an energy chapter in the free trade agreement would “set a benchmark” in terms of transparent, rules based energy markets to the rest of the world, according to a senior EU official at the talks.

EURACTIV understands the US would prefer the market to drive supply. At the moment any US gas imports to the EU would likely be sold onto other markets, that pay higher prices.

The chapter would set an example of transparent, rules-based energy markets, the senior official said. “That’s the real significance, not any short term supply considerations,” the official added.

The Council said in its conclusions, it “welcomed the prospect of US liquefied natural gas exports in the future”.

It also welcomed the negotiations towards TTIP and the discussion of trade and investment issues relevant to energy but stopped short of calling for a dedicated chapter in the EU-US trade deal.

The US began producing large amounts of oil and gas in the mid-2000s, with the fracking boom delivering further, significant supplies.

An EU TTIP negotiating document, leaked in July, revealed that the EU wants access to US natural gas supplies and crude oil exports.

The US, which has overtaken Saudi Arabia as the world’s largest oil and gas producer, banned crude exports in 1975 to ensure reserves in the case of an Arab oil embargo.

Members of the Organisation of Arab Petroleum Exporting Countries initiated an embargo, pushing up prices in the US in 1973.

If successful, the deal would cover more than 40% of global GDP and account for large shares of world trade and foreign direct investment. The EU-US trade relationship is already the biggest in the world.