Schulz on TTIP: There will be no secret negotiations 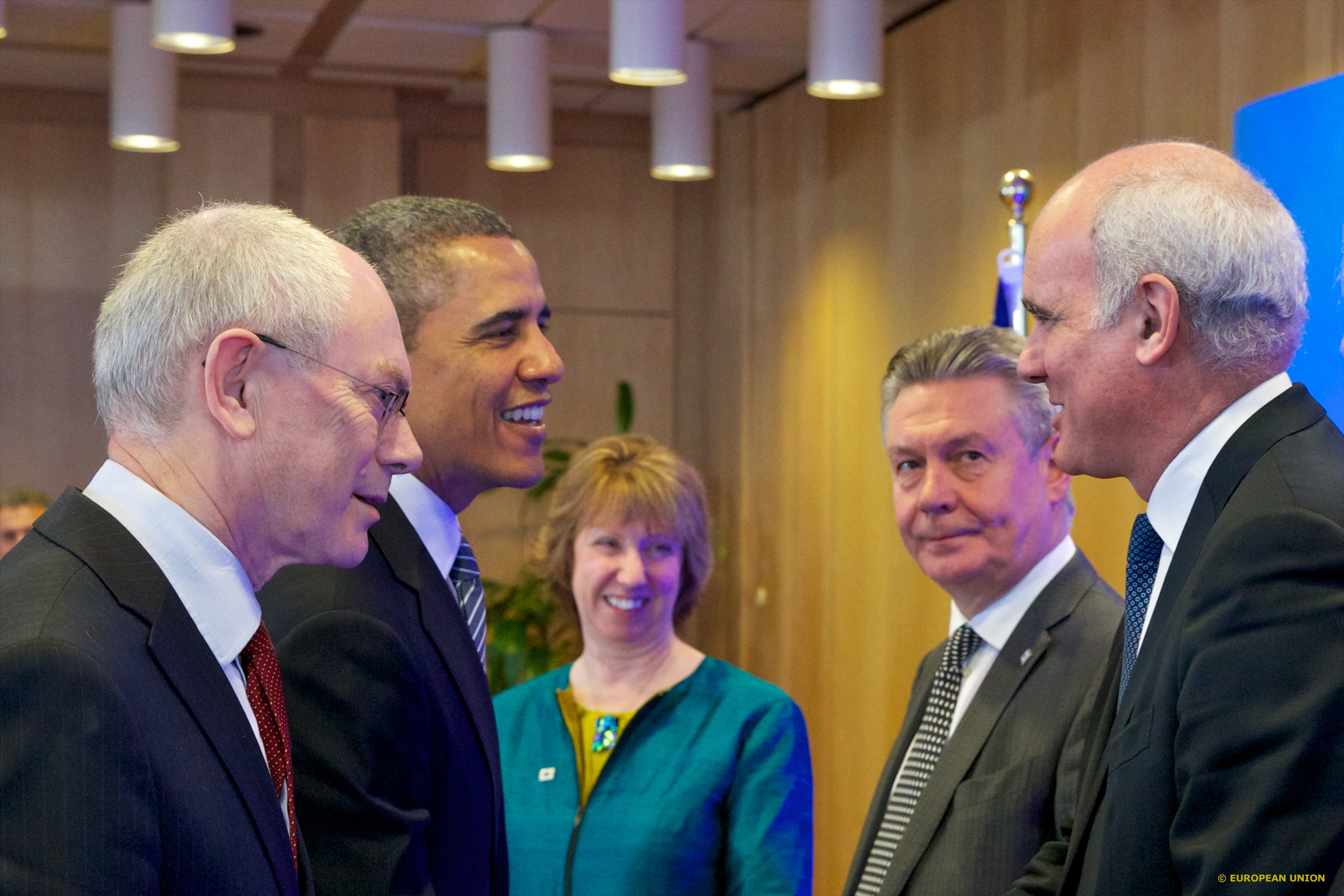 Obama meets decision makers at the EU-US summit in March. [Council of the European Union]

Ahead of the fifth round of EU-US trade talks on 19 May, Sigmar Gabriel, Germany’s Federal Minister of Economic Affairs, warned globalisation critics and the German Left Party (Die Linke) against fighting the planned Transatlantic Trade and Investment Partnership (TTIP).

Instead, he called on them to play a greater role in the talks: Those who refuse to negotiate with the United States, the social democrat said, will not be able to have any influence over the progression of globalisation.  Instead, civil society and NGOs, as well as national parliaments, should actively participate in the dialogue with their positions and help shape the agreement, Gabriel emphasised.

U.S. chief negotiator Michael Froman and EU Trade Commissioner Karel De Gucht were also present at the “Dialogue Forum on the Transatlantic Trade and Investment Partnership” in Berlin on Monday (5 May) morning.

At Gabriel’s side, the two advocated for TTIP and emphasised the opportunities it could offer companies, employers and consumers. Already today, more than 13 million jobs are dependent on transatlantic trade the two TTIP supporters said. SMEs in particular would stand to benefit from common standards – also in Germany. For this reason, TTIP is “simply necessary”, said Froman.

But Gabriel also confronted concerns surrounding the free trade agreement. Negotiations do not take place in a vacuum, but rather in the “context of the global economy’s rules of play”, he said.

TTIP offers the unique opportunity to set international high standards – together with the United States – in all areas of trade, the social democrat pointed out. The U.S. is the “motherland of capitalism”, Gabriel said, indicating that what the EU jointly negotiates with its transatlantic partner could become the global standard.

Commissioner de Gucht shared this appraisal, saying that while the World Trade Organization (WTO) already determines international standards for trade, their progressive development is long and tedious. Changes and improvements require consensus among its 160 members.

But if the U.S. and the EU arranged common high standards, they would present facts and could better promote their interests within the framework of the WTO.

Already in its beginnings, Froman spoke of the “huge potential” TTIP represents. “With a free trade area we can set standards with respect to third countries and the entire world: on labour rights, environmental standards or protection of intellectual property rights. All of these are about creating jobs, improving competitiveness and furthering innovation.”

Talk of “huge potential” is naïve

But critics like Green MEP Martin Häusling see these arguments as naïve and a “dangerous heresy”. After all, Häusling warned before the meeting, companies simply intend to use the favourable conditions to ride on the momentum of negotiations and degrade important environmental and consumer standards.

It is “cynical” to speak of opportunities through TTIP in light of clear interests associated with the agreement. In Häusling’s opinion, the social democrats were tricked by the arguments of U.S. trade representatives, who are not interested in maintaining the EU’s treasured high standards but rather in demoting EU domestic standards to respective U.S. levels.

TTIP opponents are also particularly mistrustful with respect to additional investment protection agreements. They fear these will perpetuate consumer and environmental standards once they are established. If the EU or individual member states then conclude stricter standards, U.S. companies could raise charges against them.

For this reason, Federal Economic Affairs Minister Gabriel emphasised that there will not be any additional investment agreements. Anyway, he said, such agreements between two “completely developed democracies” are completely superfluous.

Confidentiality on TTIP is undemocratic

So far, there have been four rounds of TTIP negotiations. The fact that talks are taking place behind closed doors has created significant criticism in the recent past.

In March, the Greens triggered heated debate about TTIP, when they released a confidential document from the negotiations to the public.

As a result, the participants at Monday’s discussion forum emphasised their desire to increase transparency in the negotiations. “Confidential negotiations can and should not be allowed in democratic countries,” said Gabriel.

De Gucht is convinced that the final outcome of negotiations will be “completely democratic”. In addition, the basic democratic principle of “reversibility of decisions” still applies, Gabriel said, and this will not be nullified by any agreement.

President of the European Parliament Martin Schulz also feels the planned free trade agreement is “useful”. If he were to be named the next Commission president after the elections, he wants to make TTIP a top priority, he explained at a press conference with Gabriel.

“TTIP should not be allowed to undermine social standards, data protection rules and environmental protection,” Schulz indicated. Under his direction, he said, the next Commission should be accompanied by an advisory group consisting of relevant civil society groups, experts and unions.

But Schulz was also clear on his intention to improve transparency: “whoever wants to win greater trust must make the contents of negotiations public”.

0 responses to “Schulz on TTIP: There will be no secret negotiations”