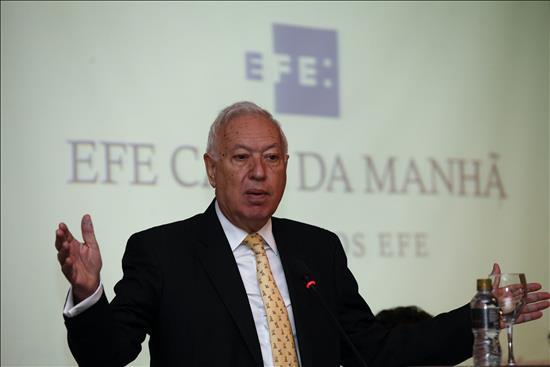 “The time has come to accelerate Mercosur,” he said in Sao Paulo during the latest installment of the “Efe Breakfast” discussion series, organized by Agencia EFE, Spain’s international news agency.

The hoped-for association agreement between the EU and Mercosur “benefits all of us”, the foreign minister said, pointing out that Spain is the European country most open to bargaining, unlike other, more cautious members of the 28-nation bloc.

“It is a decision that the four Mercosur members interested in the negotiation must make,” Garcia-Margallo said, while discounting major progress until after Argentina’s presidential election in October.

“Later, we will see if they (all) want to move forward at the same speed or at distinct (individual) velocities,” he said.

Venezuela, the newest member of the bloc “is a different case since it is entering Mercosur much more slowly”, the Spaniard stated.

The minister cited the EU negotiation with the Andean Community as an example, which led to an agreement that included Peru and Colombia, but not Ecuador.

An accord with Mercosur, Garcia-Margallo said, “would allow us to complete the triangle with the European Union and Latin America,” and in the case of Brazil, “the potential is immense”.

“We want a greater opening of Mercosur to demolish tariff barriers,” he stated.

Regarding Spain’s bilateral ties with Brazil, Garcia-Margallo was categorical: “The relationship has never been bad. The only hiccup gossips can talk about is that Brazil did not support Spain’s (successful) candidacy for the UN Security Council, and the obstacle there was about the kind of reform the Council needs.”

“We have now a strategic dialogue and permanent consultations,” the minister noted, adding that his meeting Wednesday with Brazilian counterpart Mauro Veira provided an opportunity for a “broad” review of the bilateral agenda.

Following the forum, the foreign minister was scheduled to meet with the Spanish Chamber of Commerce and have lunch at the Banco Santander headquarters with Brazilian business leaders.

Garcia-Margallo will travel from Sao Paulo to Salvador, the capital of the northeastern state of Bahia, where he will meet with officials and Spanish business leaders.