Thailand: The ‘police state’ behind the tourist paradise 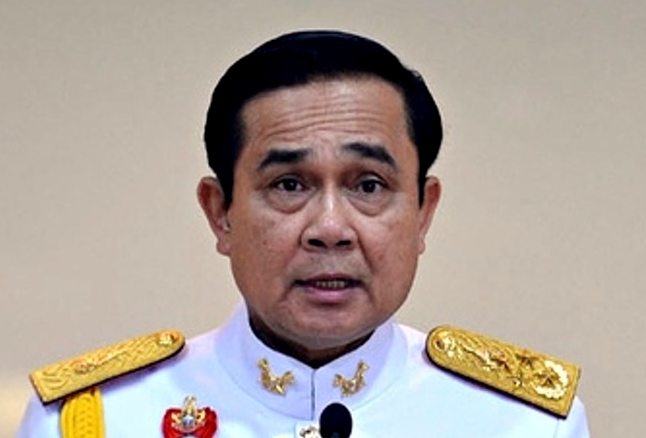 General Prayuth Chan-ocha has personally ordered a crackdown on IUU fishing in the wake of the EU's 'yellow card.' [Wikipedia]

This article is part of our special report EU-Thailand relations after the coup.

The European Union is watching closely as the military junta currently in power in Thailand is accused of a multitude of human rights violations.

In November 2015, barely a year after the coup, the human rights situation had degenerated to the extent that the European Parliament passed a resolution calling on General Prayuth Chan-ocha to: “stop arbitrary arrests and detention, overturn convictions and sentences…release human rights defenders, media workers and individuals sentences or charges for peacefully exercising their rights to freedom of expression or assembly.”

That was just one of a 14-point bullet list of demands. They also included the rights for civilians to be tried in civilian ― rather than military courts ― an end to censorship of print or online media for publishing information relating to the Thai monarchy, and to reconsider the ‘lese-majeste’ law which forbids all discussion of the King.

MEPs also urged the European External Action Service, the EU’s foreign affairs administration, to “engage in a constructive dialogue on matters regarding human rights protection and democratisation process” with the Thai government ― while also acting as observers at all trial hearings of activists and dissidents.

That was quite a roll-call of concerns, from MEPs from 14 member states standing up to condemn the military regime, for a country which only recently had been poised to sign a Free Trade Agreement with the EU under its democratically-elected premier Yingluck Shinawatra.

Perhaps for most Europeans, Thailand still conjures up images of exotic food and beaches for backpacking tourists. For ordinary Thais ― and increasingly Western diplomats, academics and journalists ― it is, in the words of Human Rights Watch, “a police state”.

Journalists that dare to criticise the junta that seized power in 2014 are sent for “attitude adjustment” in military barracks. Academics that attack the power wielded by the military regime have fled into exile, with their families harassed by the government.

The archaic ‘lese majeste’ laws which forbid bringing the dignity of the royal family into disrepute are applied so all-encompassingly that even the US ambassador in Bangkok has been put under police investigation.

Academics who have researched labour and human rights abuses in the key fishing and fruit tinning industries have been charged with defamation and computer crime, facing lengthy trials and even longer prison sentences.

The Thai military junta has been told to end its tolerance for ‘enforced disappearances’ by Human Rights Watch(HRW), the New York-based NGO.

According to the Thai Lawyers for Human Rights (TLHR) association, at least 77 academics have been harassed since the 2014 coup.

That involves home visits from army officers ordering the professors to change their “critical mindset”, or face a 48-hour spell in the ‘attitude adjustment’ camps.

At least five academics have now fled into exile, according to the TLHR, including Pavin Chachavalpongpun, who sought refugee status in Japan, and is now a visiting lecturer at Cambridge University.

Poonsuk Poonsukcharoen, of the TLHR, said the intimidation was a sign of the weakness of the current military regime. “With legitimacy stretching thin and achievements falling flat, the junta feels the pressure to silence critics to maintain its power,” he told the Bangkok Post.

According to Professor Chachavalpongpun, just hours before he was due to give a guest lecture at Oxford University on 24 February, the academic was phoned by his distressed sister ― still in Bangkok ― to tell him she had just had a visit by four military officers.

The military also, he said, called up his sister twice at her place of work, ordering him to stay silent on the Thai monarchy, otherwise his family would “pay the price”. They then ordered his entire family to report to an army camp.

Chachavalpongun said, “Far from restricting itself to just punishing me, the military has continued to harass my family in Bangkok, despite the fact that they have nothing to do with my academic work or personal view on Thai politics and the monarchy.

“As someone who has been outspoken on the sensitive issue of the future of the Thai monarchy and criticised the ruling junta, I have been used to being personally subjected to such harassment.

“In the aftermath of the coup of 2014, because I had long been critical of the military and the monarchy, the junta decided to summon me – twice – for ‘attitude adjustment’, a euphemism for coercive dressing down of regime critics.”

After refusing the summons, the junta issued a warrant for his arrest and the revoking of his passport – forcing the professor to flee to Japan.

It is not just academics. Human Rights Watch cite many examples of lawyers being charged or detained simply for doing their jobs.

In February, human rights lawyer Sirikan Charoensiri was suddenly hit with two charges by Bangkok police because she had represented activists the year before.

The same month, the lawyer representing a man accused of the August 2015 bomb attack at Bangkok’s Erawan Shrine was threatened with defamation and false statement, after repeating his client’s claim that he had been tortured.

According to Brad Adams, Asia Director at Human Rights Watch, “the Thai junta is not only running a police state, it is now retaliating against the lawyers who are defending victims.

“Thailand’s post-coup human rights crisis seems to have no end in sight,” Adams said. “Instead of upholding the rule of law, the junta is undermining it by prosecuting lawyers for doing their jobs defending clients and reporting abuses by the authorities.”

A case that made international headlines in December 2015 was a Thai factory worker who – allegedly – made a sarcastic comment about King Bhumibol Adulyadej’s dog, Tongdaeng.

So wide are Thailand’s ‘lese majeste’ laws against insulting the dignity of the royal family, that each such remark can carry a sentence of up to 15 years in prison.

Even the US Ambassador, Glyn Davies, came under initial police investigation ― despite having diplomatic immunity ― for a speech before Christmas at the foreign correspondents’ association, where he praised the Thai monarchy, but criticised the lengthy prison sentences handed down under the laws.

According to Human Rights Watch, at least 200 websites have been blocked by the military ― including HRW’s own Thailand page ― as “threats to national security.” It is highly possible that this article will not be viewable within Thailand. 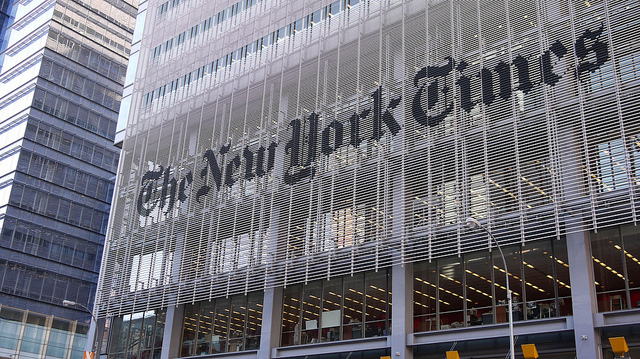 Press-freedom watchdog Index on Censorship has slammed what it calls the “hugely chilling effect” of the Thai military junta, after the International New York Times yesterday (1 December) was forced to print a virtually blank front page in the country.

The International New York Times has had – on at least two occasions ― articles pulled from its newspaper by its local Thailand printer.

On 10 March, the Committee for the Protection of Journalists formally complained to foreign ambassadors in Bangkok about the circumstances they now had to work under. Shawn Crisp said, “Throughout my 17 years of journalistic experience based in Thailand, the situation for reporters, apart from when bullets are flying in the national capital during political protests, has never been more dire.”

According to one Western journalist based in Bangkok ― who spoke to euractiv.com on condition of anonymity to avoid retaliation by the regime ― things are not yet as bad for foreign reporters in the country as domestic Thai journalists, but could be heading that way.

He said, “It’s not a very nice situation – it’s pretty scary. The junta here have essentially outlawed criticism. They can come for you at any time. When the junta took over it was definitely a big shock I think, for a lot of the journalists. Some of the more critical outlets have been shut down.

“Local journalists are taken in for ‘attitude adjustment’, which essentially means harsh interrogations. It’s pretty scary. They haven’t had the nerve to do that with a Western journalist yet – but that may change.

“Certainly local radio stations, which are popular here, particularly up in the north where the ‘redshirts’ are powerful, they have all pretty much been shut down.

“It’s unclear what the purpose of this is, but it certainly has a chilling affect. It’s a hostile process. And they have begun reducing the number of visas issued.

“In the past, the Thai government has been relatively open to the media. It was an attitude they were proud of, compared with their neighbours.

“It was perhaps always more of a ‘feisty’ press than a free press, as there are certain subjects journalists just cannot freely write about – namely the king, his health, the succession, the royal family in general and their wealth. It is also ridiculously easy to sue someone here for criminal defamation.

“General Prayuth is open hostile to, and contemptuous of, the media. The junta just does not feel the need to talk to the media, to explain itself, it doesn’t feel any responsibility.”

That scenarios does not look likely to change anytime soon. On 3 March the Deputy Prime Minister – who is also the Defence Minister – Prawit Wongsuwon vowed that any critic of the government who made “comments that damage the nation and cause conflicts” would be liable to ‘attitude adjustment’ interrogations of up to a week.

He made the comments after complaints that soldiers supposedly there to guard former prime minister Yingluck Shinawatra had been taking photographs of her.

“The soldiers took photos of Ms Yingluck probably she was pretty. It’s not a big deal. Don’t think too much about it or be anxious about it,” he said.

The Royal Kingdom of Thailand boasts the world’s longest-reigning monarch, 88-year old King Bhumibol Adulyadej, who has been on the throne 70 years this year.

Modern-day Thai politics was forged in the student uprisings of the 1970s, first in 1973 against the anti-communist military dictator Thanom Kittikachorn, a US ally during the Vietnam war.

His return to the country in 1976 saw renewed student protests, culminating in the Thamassat University massacre, an attack no peaceful demonstrators by the military which saw dozens, possibly over 100, killed. Unlike in 1973, when King Bhumibol had backed the students, scholars point the finger at the monarch for this time ordering the crushing of the revolt.

Experts now believe the military intend to stay in power to oversee a royal succession from the elderly and frail King, to his son - a potentially tinderbox situation as most Thais have lived under no other head of state.

Contemporary Thai politics is split between the Shinawatra dynasty, who have been elected to power twice - first billionaire telecomms tycoon Thaksin (2001-2006), then his sister Yingluck (2011-2014), and frequent returns to military rule. Both were overthrown.

Thaksin is now a fugitive based in Dubai and with question marks over his role in the extra-judicial killing of some 2,000 drug dealers during his rule, whilst Yingluck is under a form of house arrest in Bangkok, facing corruption charges over a rice subsidy scheme, which many outside observers believe is politically-motivated.

Shinawatra supporters, largely peasants and the working classes from the north, wear red shirts, in opposition to the yellow shirts, heavily concentrated in the capital, Bangkok, who prefer the military and the monarchy.