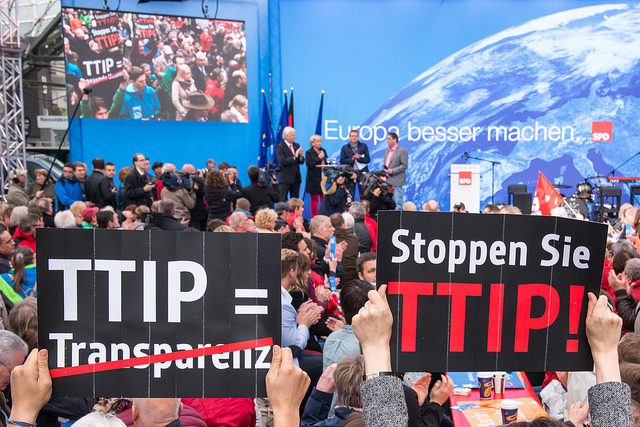 An anti-TTIP flashmob in Dortmund, Germany. Transparency has been a hot issue around the talks. [Campact/Flickr]

The Council of the European Union Thursday (9 October) finally published the secret negotiating mandate for the Transatlantic Trade and Investment Partnership (TTIP) with the US.

Although the directives empowering the European Commission to talk to Washington on the EU’s behalf were classified, they have in fact been freely available online since June 2013.

The continued classification of the 17 page document has become increasingly embarrassing, as campaigners and NGOs have accused the trade talks of not being transparent enough.

The paper explains the nature and scope of TTIP, a preamble and general principles, objectives, provisions about market access, regulatory issues and non-tariff barriers and rules, the institutional framework, and final provisions.

Member states refused to publish the speedily-leaked mandate, despite later calls from outgoing Trade Commissioner Karel de Gucht, some MEPs, and the European Ombudsman, to do so.

National governments agreed to officially declassify the negotiating documents today by “common accord” – without debate – it was announced by the Italian Presidency of the EU. Only the Council could take the decision to publish the negotiating mandate.

De Gucht’s department felt the continued non-publication had become a stick for TTIP opponents to beat them with, especially as transparency became a hotter and hotter issue round the talks.

The Trade Commissioner said: ‘I’m delighted EU governments have chosen today to make the TTIP negotiating mandate public – something I’ve been encouraging them to do for a long time […] it further underlines our commitment to transparency as we pursue the negotiations.”

Ombudsman Emily O’Reilly investigates complaints about maladministration in the EU institutions. In September following complaints from civil society organisations, she opened two investigations into the EU Council and Commission over the opacity of the talks.

Accusations were made about important documents being kept secret, delays in publication, and the alleged leaking of TTIP texts to big business and corporate lobbyists.

Among O’Reilly’s demands for more transparency was that the mandate be published. She stopped short of calling for all negotiating documents to be available.

“It’s a good day for TTIP transparency. I am delighted to see that all member states in the Council now share the view of many, that given the potential impact of TTIP on the lives of citizens, key documents, such as the negotiating directives, have to be published,” she said.

But NGOs sounded a note of caution. Olivier Hoedeman, of Corporate Europe Observatory, said, “This hopefully will set a precedent, making it normal practice to publish documents around international trade talks. But the Council should clarify whether this signals a new transparency policy, or is nothing more just an empty gesture.”

Political groups in the European Parliament also welcomed the publication of the documents (see positions below), describing their declassification as “better late than never”.

The Commission has protested that the trade talks are the most transparent ever held, pointing to the fact that they provide MEPs with more information than they are required to under the Lisbon Treaty, a dedicated website and Twitter account, and regular meetings with concerned parties.

Seven rounds of talks have taken place, with the last finishing in Washington in October.

?The chairman of the international Trade Committee in the European Parliament Bernd Lange, said, "We need a broad, fact-based public debate on TTIP in Europe to explore the real opportunities and concerns surrounding the agreement. We have said for a long time that the publication of the negotiating mandate is fundamental for such a debate to take place. It is better late than never."

ALDE MEP Marietje Schaake said, "I am glad the member states have at long last reacted to the call to make the mandate public. The European Parliament, the European Commission and stakeholders had long been calling for it. It shows that governments are finally realising that more transparency and accessibility are needed in the negotiations on TTIP.

"It is ironic that the mandate, having been leaked previously, has already been available for over a year."

Emma McClarkin MEP, European Conservatives and Reformists trade spokesman, said, "This is a welcome move that shows clearly this is not a cloak and dagger deal aimed at damaging our public services, but one that will deliver for all European and British people.

“Trade deals by definition cannot be negotiated through the press, but we need to ensure we carry people along with us by being as transparent as possible. We must confront those who are anti-TTIP with facts so opening up the negotiating mandate will help allay many people’s concerns.”

Socialists & Democrats spokesperson on international trade, MEP David Martin, said, "Socialist and Democrat MEPs have been clear we want ISDS (the investor-state dispute system) removed from the treaty and EU public services and standards to be protected. It is now time for national governments to explain the contents of the mandate which they unanimously approved."

"There is a large and growing sense of unease and concern among the European public and civil society about the ongoing TTIP negotiations. This concern reflects the broad scope of the negotiations and their possible implications on European standards, and is reinforced by the opaque negotiation process. We need to be sure those negotiating on the EU's behalf do not budge an inch on EU standards and full transparency is key in this regard."