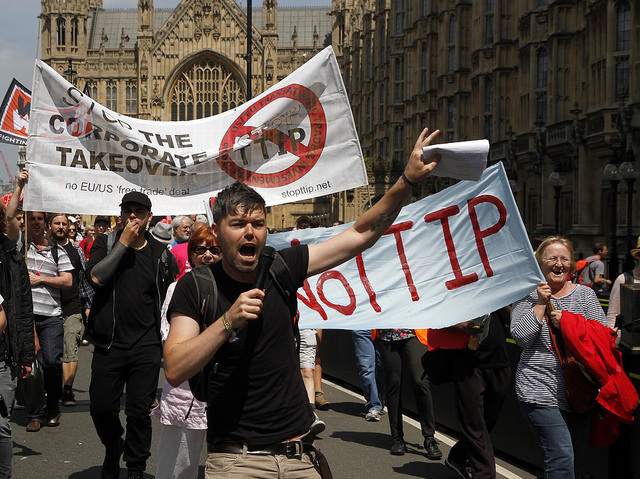 An anti TTIP-protest in London. 12 July 2014. There are concerns over the transparency of the trade talks. [World Development Movement/Flickr]

The European Commission today (7 January) published Transatlantic Trade and Investment Partnership (TTIP) negotiating documents, as the European Ombudsman called on the executive to further increase transparency around the trade talks with the US.

It is the first time that the Commission has published the legal language and binding rules the EU is pushing for during free trade agreement negotiations. The TTIP talks have been dogged by accusations of secrecy and suspicions that big business is having too much influence on negotiations.

Ombudsman Emily O’Reilly, who investigates maladministration complaints about the EU institutions, began a probe into the issue in July. The Commission has repeatedly said the discussions have been the most open trade talks in history.

EU Trade Commissioner Cecilia Malmström told reporters in Brussels today that more documents would be published after the next round of talks with the US in February. The texts are accompanied with reader’s guides to explain them.

“It’s important that everyone can see and understand what we’re proposing in TTIP and – just as importantly – what we’re not,” Malmström said.

She said papers on regulatory coherence and sustainable development will be published once discussed with the EU Council and Parliament, and after they had been shared with the US.

But documents regarding market access, quotas and tariffs were too sensitive to be published, she said.

O’Reilly has demanded more disclosure. It was not enough to keep certain documents secret, just because US negotiators did not want them made public, she said in recommendations to the executive, also published today. She called on the executive to tell the US that it had to justify any American request to not disclose a document.

“I am aware that the Commission at times needs to talk to the US confidentially to be able to negotiate effectively. However, US resistance to publishing certain TTIP documents is not in itself sufficient to keep them from the European public,” she said.

In November, the Commission said it would publish more EU negotiating texts. But it also said there “should be no intention to publish” any US documents or common negotiating documents without the explicit agreement of the US.

Malmström said today that the EU could only publish its own documents. It was up to the US to decide what they do with their papers, she said.

O’Reilly wants more public access to consolidated EU-US negotiating texts. US negotiating documents are not public. These common texts are the closest MEPs can come to seeing them. They can only be viewed in dedicated reading rooms by members of the European Parliament’s trade committee.

In November, the Commission undertook to make these “EU restricted” papers available to all MEPs and to restrict fewer documents.

While the Commission has said it will publish information about who meets its political leaders and senior officials during the talks, O’Reilly wants lobbying transparency extended to Commission directors, heads of unit, and negotiators.

In July 2014, O’Reilly opened twin investigations into the EU Council and Commission amid concerns over the secrecy of the trade talks. As part of her probe, she held a consultation, which received an unprecedented 6,000 replies from members of the public.

“The Commission has made real efforts to make the TTIP negotiations more transparent,” she said.

It has agreed to publish and update a list of TTIP documents shared with the Parliament and Council. But it should establish a comprehensive list of public and non-public TTIP documents and for greater proactivity concerning the publication of documents, including agendas and minutes of meetings with lobbyists, she said.

Dutch Member of the European Parliament, Marietje Schaake (ALDE) said, "It is good to see that the Commissioner is now fulfilling her commitment on more transparency for the TTIP negotiations. It is important that citizens and stakeholders have more access to the negotiations, so that we can have a fact-based discussion and make sure that the priorities for the EU are clear. Only then can we make sure that we get a final text which benefits Europe and Europeans. I hope people will go and actually read these texts, so that they can see what TTIP is and is not about."

David Martin, S&D spokesperson on international trade, said, "We have been calling for greater transparency since TTIP negotiations were launched, so we appreciate the effort made by Commissioner Cecilia Mälmstrom. However, we are not fully satisfied. We also want the services schedule published, as the Commission has already done for the Trade in Services Agreement (TiSA), which would ensure the full protection of the public services.”

S&D MEP Bernd Lange, who chairs the parliamentary trade committee, said, "The publication of the negotiation documents is a result of our demands for more transparency in the talks with the United States. The road ahead is still long, and we will continue to encourage the Commission to demonstrate a maximum of transparency. In addition, it must be clear that the demand for more transparency does not stop at the TTIP negotiations, but also applies to all negotiations in which the EU is engaged."

February: Next round of TTIP talks