US multinationals could sue EU governments through CETA 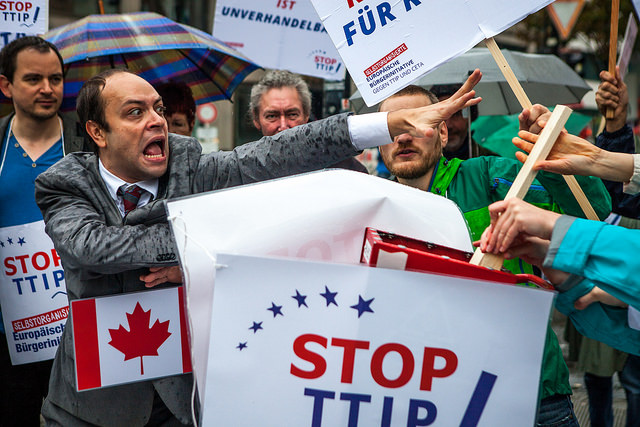 American multinationals could use investor-state dispute settlement (ISDS) provisions in the European Union-Canada trade deal to sue EU governments in costly legal battles that could stymie policymaking, campaigners have warned.

Corporations with Canadian subsidiaries and holdings could use the Comprehensive Economic and Trade Agreement (CETA) to take countries to international arbitration tribunals, even if the ISDS clause is dropped from the EU-US Transatlantic Trade and Investment Partnership (TTIP).

US companies with “substantial business interests” in Canada would be able to use the CETA ISDS mechanism, if it is ultimately cleared by European and national parliaments.

They include ExxonMobil Investments, which used ISDS in the North American Free Trade Agreement (NAFTA) between Canada, the US and Mexico, to successfully sue Canada in 2007. The energy giant’s investment arm with Murphy Oil claimed about €49 million, but their final award was never made public.

Sustainable trade policy officer at Transport & Environment, Cecile Toubeau, said: “CETA will be a Trojan horse for US-based multinationals to sue the EU and its member states.”

Under NAFTA rules, Canada was sued 34 times, at least once a year since 1996, according to a report Trading Away Democracy, published yesterday (18 November).

Canada has paid €121 million to American investors. Not all the cases were successfu,l but that still exposed the Canadian government to exorbitant legal costs of about €223.4 million, Transport and Environment, an NGO, said. The figure is based on UN research that put the legal fees, (typically 82% of total costs) and tribunal expenses at more than €6.4 million on average.

The US has had 22 cases brought against it under NAFTA. The cases have either been dismissed or arbitration never began, and three cases are pending.

Blair Redlin, researcher with Canada’s Trade Justice Network, said: “Canadians have learned painfully from NAFTA that investor-state dispute settlement is a dangerous system which transfers power away from elected governments, towards corporations and private lawyers.”

Supporters of trade deals would argue that the figures were relatively small in comparison to the economic benefits of free trade. The European Commission, for example, claims that TTIP will be €119 billion a year to the EU economy – or an extra €545 for a family of four.

CETA would unleash a wave of corporate lawsuits against Canada, the EU, and its member states, particularly in the mining and financial sectors, campaigners said.

Analysis by 15 environmental NGOs, citizens’ groups and workers unions from both sides of the Atlantic found that that CETA grants even greater rights to foreign investors than NAFTA.

As well as the cost, the threat of litigation had a “chilling effect” on government regulation, which was needed to fight everything from climate change to preventing the next financial crisis, they said.

“If the European Commission, member states and the European Parliament are serious about protecting public policy, they have to scrap investor-state dispute settlement not only from TTIP, but also from CETA,” Toubeau said.

The report said that for Canada, the risks of being sued by EU banks, insurers and holding companies over financial regulations will increase significantly with CETA.

The EU and its member states are at particular risk of being sued by Canadian mining, oil and gas companies, which are already engaged in several natural resource projects across Europe.

The CETA text has been finalised, and after up to two years of “legal scrubbing” will pass to European and national parliaments for ratification.

On 10 November, new EU Trade Commissioner Cecilia Malmström said only minor adjustments to ISDS in CETA could be made.

“It will not be possible to take the dispute settlement procedure out of CETA. We are acting in a European context and must listen to the views of other countries,” Germany’s Economic Affairs Minister Sigmar Gabriel said after meeting with Malmström in Berlin.

In September, Gabriel had said Berlin would not sign unless this clause were scrapped, refusing to accept investment protection agreements in CETA and TTIP.

Read>>Malmström: Only minor adjustments to ISDS in trade deal with Canada

TTIP, the trade pact between the EU and US, is currently under negotiation.

Matthias Fekl, France’s Secretary of State for Foreign Trade, said this week his country will not support ISDS in TTIP.

Opposition to ISDS in TTIP was so strong the European Commission took it off the negotiating table and held a public consultation. It attracted 150,000 replies.

In his speech to the European Parliament on 22 October, Commission President Jean-Claude Juncker said he would not accept any external limitations being placed on the member states’ ability to settle their own industrial disputes.

But the US is still pushing for its inclusion.

During a visit to the European Parliament’s October plenary session in Strasbourg, Anthony Luzzatto Gardner, from the United States’ mission to the EU, insisted that the ISDS was an important clause.

“Our message to the people of Europe is not to remove it from the table, but to conclude the discussion process and to improve it,” he said.

Ambassador David Plunkett, Canada's Ambassador to the EU, said, "There are significant misconceptions in this and other recent articles by the non-governmental community regarding the nature and scope of investment protection provisions in the CETA, particularly with respect to Investor-State Dispute Settlement (ISDS).

"ISDS is an essential component of free trade agreements; it provides foreign investors with access to an independent and impartial mechanism to resolve disputes while leaving the decision on whether to launch a dispute with investors who are best positioned to assess the impact of a government measure. Canada has included ISDS in all our major trade agreements since the Canada-US Free Trade Agreement.

"EU Member States have hundreds of treaties that provide for ISDS. Strong investment protection provisions in CETA will provide Canadian and EU investors with greater certainty, stability, transparency, and protection for their investments while preserving the full right of each government to legislate and regulate in the public interest. Canadian and EU investors alike will be subject to all of Canada’s and the EU’s laws and regulations, including those pertaining to environmental, labour, health care, building, and safety standards.

"The argument that CETA would automatically allow companies based in countries other than Canada to benefit from the agreement’s investment protection provisions is completely false. The CETA text is clear that only investments made by Canadian investors into the EU would be covered by the investment protection provisions of the agreement. Furthermore, companies in Canada owned or controlled by investors from a third state and lacking substantial business activities in Canada (e.g. letter-box companies), would not be recognised as an investor for the purposes of the investment chapter of CETA."

A Transport and Environment spokesman answered, "The CETA text says that investors with "substantial business activities" in Canada are covered. All the US-based multinationals that we show in our study have registered subsidiaries with substantial business activities in Canada (offices, many employees, massive turnover every year etc.) So, clearly they will be able to sue the EU and its member states through CETA."

Ottawa and Brussels started trade negotiations in 2009 and a deal was initially supposed to be concluded by the end of 2011.

If the treaty is signed, it will affect almost 40% of world GDP. The transatlantic market is already the most important in the world. It is estimated that TTIP could save the average European household €545 each year, and could cause the European Union's GDP to grow by 0.5%.

0 responses to “US multinationals could sue EU governments through CETA”