US to open TTIP reading rooms across EU 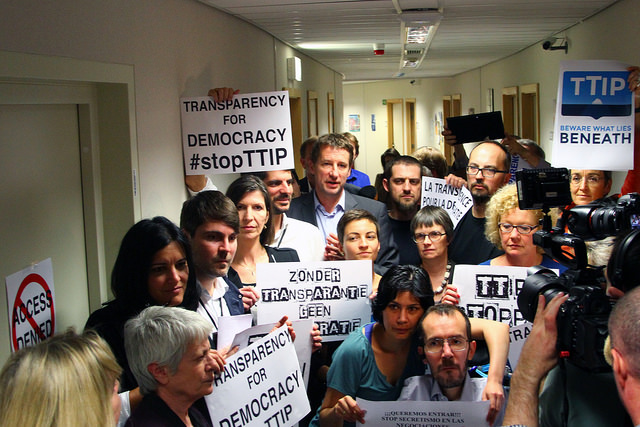 Green and GUE/NGL MEPs in a protest against the reading room system, before they were granted more access to the documents. [greens/EFA/Flickr]

The US government will open “reading rooms” in its embassies across the European Union, so that national politicians can read secret documents related to the Transatlantic Trade and Investment Partnership (TTIP).

The move came in response to requests from EU countries for easier access to the texts and greater transparency on TTIP.

Reading rooms are already used in Brussels, so that members of the European Parliament can read EU-US negotiating documents.

The “consolidated texts” combine both sides’ positions once agreement on a given aspect of the trade talks has been reached.

The US has refused to make its own negotiating positions public but has conceded limited access to the consolidated texts.

It is now set to announce an expansion of the reading rooms beyond the European Parliament to all EU countries and selected national representatives. The representatives allowed to see the papers will be chosen by their governments.

EURACTIV understands that the move is to ensure politicians in EU countries are better informed of the process, and don’t have to travel to Brussels to the reading rooms in the European Commission’s offices.

The US has already agreed to extend access to reading rooms to all MEPs. It was initially only allowed to a limited number of MEPs in the Parliament’s Trade Committee.

MEPs can take pencil and paper into the rooms, but it is not clear what they can do with the classified information they garner from reading the papers.

There are also reading rooms in the US, but reportedly those allowed to scrutinise documents are warned they will face jail if they are leaked.

Every single member of Congress can see consolidated texts. “Additionally, hundreds of cleared advisers, both from industry and every major labour union, can see the texts, as can a variety of NGOs and environmentalists,” a US source told EURACTIV.

“Making TTIP negotiating texts available to member state officials in their capitals is one more step that we are taking to increase transparency in these negotiations,” the source added.

The concession will likely be welcomed by the European Commission, which is handling talks on behalf of the EU.

The executive has been forced to respond to concerns by campaigners and MEPs that the TTIP negotiations are too secret.

The European Ombudsman, who investigates maladministration in the EU institutions, opened an investigation into the lack of transparency around the talks.

She told EURACTIV earlier this month that, “There’s quite a disparity in transparency culture between the EU and the US.

“The US considers all trade agreement documents, no matter how anodyne, as classified. The US can give reasons and some of them may be justified but whatever reasons they give have to be interrogated by the EU.”

>>Read: Ombudsman: EU must interrogate US over TTIP transparency

In the executive’s response to the Ombudsman probe, it said it would “continue to seek to persuade the US of the need for greater transparency”.

EURACTIV understands that the US announcement, when it comes, will help Malmström argue that the concession is a sign of greater American commitment to transparency.

But the US is not convinced of the public demand for the online publication of TTIP information that the Commission has been providing.

If successful, TTIP would cover more than 40% of global GDP and account for large shares of world trade and foreign direct investment. The EU-US trade relationship is already the biggest in the world.

But the road ahead is paved with hurdles. Anti-TTIP campaigners claim the deal will lead to a lowering of environmental, food safety and other standards.

They have also criticised a lack of transparency in the talks.

6 responses to “US to open TTIP reading rooms across EU”