EU-US trade deal: people have the right to know 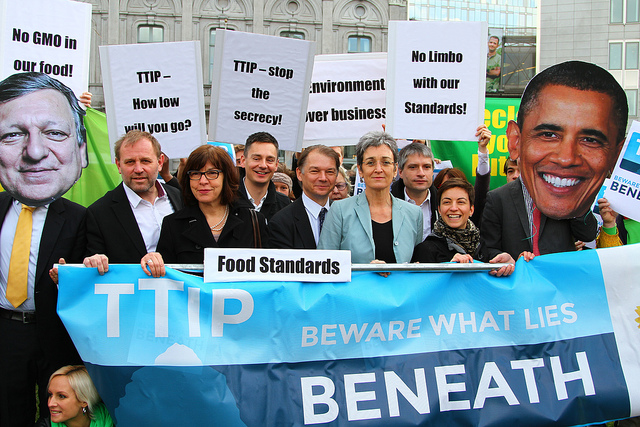 Environmental campaigners have questioned the legality of the EU-US trade talks’ secrecy after a European Court of Justice ruling offered “a glimmer of hope” to see the negotiating mandate made public.

The recent ruling by the European Court of Justice, in a case brought by Dutch MEP Sophie in‘t Veld, could not have come at a more pertinent time (EURACTIV story: TTIP document could be made public after EU court ruling, July 4th 2014). As secretive negotiations between the EU and US resume next week on the controversial Transatlantic Trade and Investment Partnership (TTIP), the ruling offers a glimmer of hope for transparency. Documents related to international trade agreements such as these could be made public in the future following the Court’s decision.

The case, which was brought against the EU Council of Ministers over access to a legal opinion about transfers of bank data to the US, is relevant to TTIP because it has to do with external affairs. The court held that it is not possible to withhold requested documents from the public, and that transparency requirements should apply, even in the context of international trade negotiations.

In the case of an EU-US trade agreement, the European Commission has repeatedly stated that the main objective of the negotiations is to achieve regulatory coherence by removing non-tariff barriers to trade. It has also argued that secrecy is inevitable because this is a matter of international relations. However, it appears that the outcome of the talks has much less to do with traditional trade issues, and much more to do with regulations and standards that apply in the EU and the US.

Transparency around these trade talks is essential, and in some cases a legal necessity, because it will affect almost every single aspect of citizens’ daily lives. Yet, citizens are being kept in the dark about the talks, and civil society are relying on government and industry leaks to find out what is going on behind closed doors, and who is driving the negotiations.

Documents released following an access to documents request by Friends of the Earth Europe show that powerful industry lobby groups have gained privileged access to decision-makers in the European Commission throughout the talks.

DG Trade, where EU negotiators sit, held a staggering 113 meetings (74%) with industry lobby groups out of 154 meetings held in total with external stakeholders, with only 13% (19 meetings) held with public interest groups. Frequent visitors at DG Trade include key proponents of the trade deal – such as the Transatlantic Business Council and BusinessEurope or the chemical industry’s lobby umbrella CEFIC. All are keen advocates of permanent regulatory cooperation between the EU and US – exactly what civil society groups fear will further strengthen industry dominance on policy-making on both sides of the Atlantic, and weaken essential health, environment and consumer safeguards.

A leaked European Union document, published in the Washington Post (8 July) exposes the dangerous direction the trade talks between the US and the EU are taking when it comes to raw materials and energy (EURACTIV story here). US energy policy could be changed to allow for increased exports of oil and gas – keeping the EU dependent on high levels of fossil fuel imports, and essentially trading away regulations that protect citizens from dangerous climate change.

These hard-won documents do little to soothe civil society fears, and show little representation of public interest. The nature of their exposure also makes a mockery of the European Commission’s transparency claims.

Friends of the Earth Europe, together with over 250 civil society organisations worldwide, continue to call on the European Commission – so far without response – to open up the negotiating process of the EU-US trade talks for public scrutiny. This means the publication of the negotiating mandate, all documents submitted by the EU, and the negotiating texts.

The standard legislative process in the EU allows for public scrutiny at each step in the process, and the European Court of Justice has now ruled that transparency requirements apply to international trade negotiations. People have the right to both know what is being negotiated on their behalf, and to be fairly represented in the process.