2022: Choosing a shade of green for the EU’s transport sector 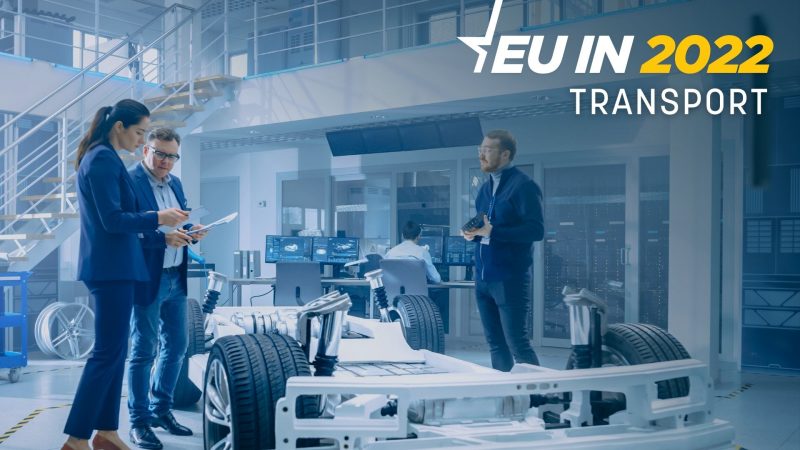 The coming 12 months will see lawmakers attempt to reconcile their differences, pushing each Fit for 55 file towards a version that can gain popular support.

The ‘Fit for 55’ climate laws package and COVID transport disruptions are set to dominate EU transport policy debates once again in 2022, as the EU seeks to deepen progress on the green files while grappling with the mobility impact of the resurgent virus.

The last five months of discussions on the wide-ranging ‘Fit for 55’ climate package, which aims to cut emissions by 55% by 2030 compared to 1990 levels, have revealed clear issues of contention among parliamentarians and member states.

The coming 12 months will see lawmakers attempt to reconcile these differences, pushing each file towards a version that can gain popular support.

While not as voluminous as 2021, several significant files will also be unveiled over the next year.

Upcoming legislation includes the review of CO2 emission standards for heavy-duty vehicles, a framework to harmonise the measurement of transport and logistics emissions, and a revision to the law governing the collection and transmission of passenger data prior to flying.

Making progress on Fit for 55

Lawmakers, lobbyists, journalists, and others in the Brussels orbit spent much of the second half of 2021 wading through the mammoth ‘Fit for 55’ package, which includes files aimed at greening planes, ships, and road vehicles. The package will continue to command attention in the transport sphere throughout 2022.

ReFuelEU Aviation, which would oblige all flights that land in the EU to uplift a set percentage of green jet fuel, has provoked debate over its timeline for implementation and the ambition of the sustainable aviation fuel (SAF) blending targets.

Given the significantly higher price of SAFs compared to kerosene, the effect on the competitiveness of European airlines remains a topic of concern among EU countries. Germany’s push to increase electro-fuel targets is likely to raise eyebrows among more price-sensitive member states.

Division also exists over whether the approved sustainable feedstock list for aviation biofuels (currently based on Annex 9 of the Renewable Energy Directive) should be widened or limited.

On the industry side, airlines are unlikely to challenge the proposed SAF blending requirements, instead putting their energy into fighting the levy on kerosene proposed under the revised Energy Taxation directive.

In the field of shipping, the inclusion of LNG as a green transition fuel in the FuelEU Maritime proposal has caused outrage among green campaigners.

NGOs want it stripped from the text, though with MEP Jörgen Warborn of the centre-right EPP Group taking the lead on the file in the EU Parliament’s Transport Committee, it remains to be seen if their plea will be listened to. Expect the role of liquified natural gas to be a bone of contention for months to come.

When it comes to vehicles, the review of CO2 emissions for cars and vans, the Alternative Fuels Infrastructure Regulation (AFIR), and the EU battery regulation are set to take the spotlight.

The EU is pushing for stricter emissions standards on internal combustion engine vehicles by 2030, with a proposed ban on the sale of polluting vehicles by 2035.

Already a division has emerged between countries, with wealthier nations generally happy to approve the mandatory switch to electric and hydrogen-powered vehicles, while less wealthy members worry that the ban will see an influx of older, more polluting internal combustion engine vehicles from richer countries enter their second-hand markets.

Expect the role of the internal combustion engine in the green transition to be a flashpoint in 2022.

Perhaps even more controversial is the Commission’s proposal to extend the EU’s carbon market, the Emission Trading System (ETS), to road transport.

Member states have lined up to condemn the proposed move, arguing that doing so will hurt the poorest in society and lead to “unpredictable” social consequences. Most environmental NGOs have also come out against the ETS extension on the same grounds.

However, major players including Germany have welcomed the proposal, praising the ETS as a highly effective means to incentivise green changes.

The stark divisions indicate an uphill battle to progress the file.

Ertug is also pushing for concrete sanctions on countries that fail to meet the targets, an inclusion the Council is likely to balk at.

As with maritime, gas will be a sticking point in the AFIR debate. Lawmakers from across the political spectrum differ on whether LNG has a place in the proposal.

Some back it as a necessary transition fuel for heavy-duty vehicles (as, by and large, do heavy-duty vehicle manufacturers), but others, such as Greens MEP Jutta Paulus, see it as a “dead-end” that should be excluded.

The wide-ranging EU battery regulation seeks to make European batteries the greenest in the world by setting carbon emissions limits on production, obliging manufacturers to use recycled content, and imposing checks to prevent labour abuses in the battery supply chain.

The French EU Council presidency hopes to conclude talks on the battery regulation during its stint, with the desire for it to pass into law as soon as possible. Paris had previously called for the implementation of the battery regulation to be brought forward by a year to 2024 and stressed the need to “get results quickly” on the file, highlighting it as a priority area.

However, the file is not without criticism: green campaigners want to see mandatory recovery rates for key battery metals including cobalt, nickel, and lithium pushed up, while car manufacturers warn that the myriad new regulations could increase the cost of electric vehicles.

The battery industry has also expressed concern over the obligation to use recycled material in the manufacture of batteries, cautioning that potential shortages of recycled content will harm the competitiveness of European vehicles.

Expect industry and green campaigners to double down efforts to bend the ear of lawmakers as the file moves forward.

In addition to the Fit for 55 files, lawmakers will need to get to grips with the “efficient and green mobility package”, released on 14 December.

Positions will soon be established on the updated Trans-European Transport Network (TEN-T) regulation and on the revision of the directive on intelligent transport systems, which is set to pave the way for greater driving automation.

The opening days of 2022 are likely to prove eerily familiar to those of 2021, as citizens live with wide-ranging restrictions and governments across the bloc push citizens to get vaccinated (the booster shot, this time around).

Indeed, rocky months seem to lie ahead for passengers and supply chains, as hopes that the pandemic is waning are seemingly dashed by the Omicron mutation.

“As passenger travel remains depleted, air cargo capacity will be constrained through 2022 all while the demand for goods is likely to grow, with 2021 trading volumes overtaking pre-pandemic levels and achieving their fastest year of growth in over a decade,” Reddington said.

Airlines and airports are also gearing up for another year of restrictions on passengers. Trade associations have already condemned the omicron-driven testing of vaccinated travellers imposed by nervous EU countries.

“Maintaining testing and quarantine requirements for vaccinated travellers will only bring hardship to the livelihoods and economies of those affected by and reliant upon the travel industry. There is no longer any corresponding health safety benefit,” Olivier Jankovec, director-general of ACI EUROPE, and Thomas Reynaert, managing director of Airlines for Europe (A4E), said in a joint statement.

December additionally saw the Commission adopt an extension of airport slot relief rules. While usually airlines are required to ensure that 80% of their flights take off to maintain valuable airport slots, this will be reduced to 64% for the summer scheduling season.

The ‘justified non-use of slots’ exception, which covers times when state-imposed COVID-19 measures prevent passengers from travelling (such as during lockdowns), will also be extended.

“I know the aviation sector is concerned about the new Omicron variant and the recent drop in airline bookings. We are monitoring the situation closely,” EU Commissioner for Transport Adina Vălean said. “The Commission has demonstrated throughout the COVID-19 crisis its willingness and ability to act swiftly where needed, and this will remain the case in the coming months.”

The extensions reflect the uncertainty over the trajectory of the pandemic, though the higher targets indicate a belief that the situation is somewhat improving.