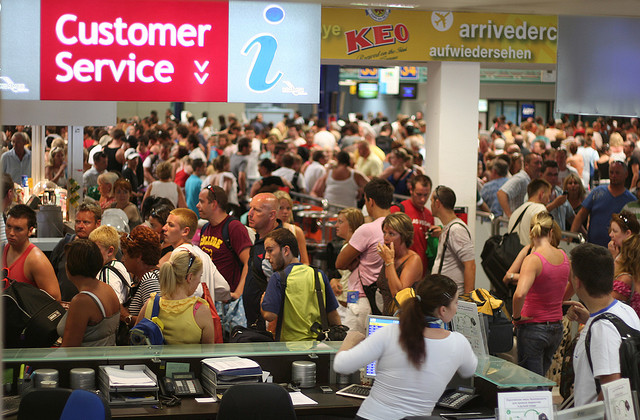 Airline bosses have called on the European Commission to legislate to reduce the number of ground air traffic control strikes, and on the European Union as a whole to lift “all unreasonable taxes” on aviation.

The CEOs of the EU’s five largest airlines, Ryanair, Air-France-KLM, Easyjet, International Airlines Group, and Lufthansa Group, want a bloc-wide, binding, dispute-resolution mechanism to be part of the executive’s new aviation strategy. But unions said they should instead focus on recognising trade unions through the industry.

More than 3,000 flights were cancelled in 2015 and there had been nine air traffic control walk-outs in the last year, they told reporters today (17 June) in a joint press conference, their first together, in Brussels.

They used it to demand the removal of all “unreasonable” taxes on aviation, arguing it created jobs and economic growth and announced the creation of a new industry body, based on the US Airlines for America and open to all airlines, which would lobby on its behalf.

The European Commission is working on an aviation package including a strategy to bolster the competitiveness of the sector. The package will be put forward towards the end of the year and is expected to include proposals for new EU regulation.

The industrial dispute mechanism was not intended to outlaw or replace strikes by traffic control but to provide a first option before industrial action, said Ryanair CEO Michael O’Leary.

“We are specifically not trying to outlaw strikes,” said O’Leary. “It’s about introducing a new club to the golf bag, so that a strike is not the first thing in the golf bag.”

The EU could minimise passenger disruption by keeping airspace open over countries where there was an ongoing strike. Technology would allow planes to safety overfly such member states.

“The EU needs to ensure strikes don’t cause disruption to passengers,” said the controversial boss of the low cost airline.

Patrick Itschert, Deputy General Secretary of the European Trade Union Confederation, told EURACTIV, “The right to strike is a fundamental right. There can be no question of undermining that right. The way to resolve disputes is through negotiation with trade unions. The CEOs should instead ensure recognition of trade unions throughout the airline industry.”

The bloc should “reset” the Single European Sky strategy to improve the use of public money to make airspace providers more efficient, O’Leary added at the press conference.

EURACTIV has asked the Air Traffic Control Association for reaction. The story will be updated with the responses as they are received.

The European Commission, which closed a consultation into its new strategy on 10 June, was also asked for comment. It said it was analysing the 280 contributions it received and was preparing a report.

“Today’s meeting of five airline CEOs has nothing to do with the European Commission,” Jakub Adamowicz, Commission transport spokesman told EURACTIV. “We are of course in constant contact with all key stakeholders of the civil aviation industry,” he added.

The five bosses, who stressed that the aviation industry was vital for economic growth and was a job creator, outlined a series of reforms that they want adopted in the new strategy.

Conspicuous by its absence is any call for a regulation for a standardised minimum size of cabin baggage that would be accepted by all airlines.

That was not and would not be discussed, said International Airlines Group’s Willie Walsh

“Our industry doesn’t just create growth and jobs in our industry and others – it has a huge multiplying effect in being part of the [transport] infrastructure,” said Lufthansa chief Carsten Spohr. It could give Europe the edge in terms of global competitiveness, Spohr claimed.

Airports cost passengers too much, said Air France-KLM’s Alexandre de Juniac. Costs ranged from 20% to 8% for the five airlines.

Airport charges in Europe were among the highest worldwide, he said, before calling for more effective regulation of monopoly airports. Security costs were not properly controlled, he added.

Airlines had consistently delivered lower fares for consumers over the last two decades, said Easyjet’s Carolyn McCall, “now is the time to ensure those reductions are matched by other parts of the industry.” The ground handling market should also be liberalised.

The CEOs said pending EU laws, such as the Single European Sky, passenger rights, and the slot regulation needed to be finished and brought into force.

"Airport charges are already regulated at EU level since 2007. The implementation of this regulation has been the subject of an extensive report at European level, as recently as last year. It remains a subject that is regularly monitored by the European Commission.

"Airlines are NOT paying the full cost of the airport infrastructure they use – far from it. Each year, the revenues collected from airport charges levied on both airlines and passengers fall over €3 billion short of covering airports’ operating expenses. This also means that not one cent of airport capital expenditure is paid for by airlines. This situation reflects the extensive competitive pressures on airports and the fact that airport competition is now a reality across Europe.

"The airline position contends that reductions in airport charges at major airports through tighter regulation would save consumers €1.5 billion in lower fares. This extraordinary claim hinges on one key assumption – that any such reduction in airport charges would be passed on 100% by airlines to passengers.

"Yet, independent research has shown that at major airports, airlines are in fact able to charge passengers a significant non-cost related premium. This implies that any mandated reduction in airport charges is highly unlikely to be passed on to passengers. Hence, the underlying rationale of airline lobbying to artificially lower airport charges is more about benefit to airline shareholders than the travelling public.

"This in turn, would also prevent airports from investing in expanding capacity, or at least make the cost of such expansion more onerous and the business case for it, more difficult. As a result, this lobbying ultimately also appears to be about protecting the position of incumbent airlines at major airports and limiting airline competition."

Olivier Jankovec, director general of ACI Europe said, “Major airlines already have a free lunch, now they also want a free dinner. Let’s get real here, airline interest does not necessarily equal consumer interest. Assuming airlines would pass mandated reductions in airport charges on to consumers is ludicrous to say the least. More than that, it flies in the face of reality – just consider the fact that most airlines do not even effectively refund airport charges and other ticket taxes to passengers who do not take their flight.

“We find it disappointing that the five biggest European airlines rely on such an archaic suggestion as one of their main contributions to the forthcoming EU Aviation strategy.”

The business outlook for civil aviation is looking bright thanks mainly to rising Asian demand for aircraft. Over the next 20 years, global air traffic growth is projected to increase at a rate of 5% a year, in line with historical trends.

But airlines are expected to have a harder time, with tougher competition in Europe leading to a consolidation of the sector, according to industry forecasts.

Gulf airlines in particular have started to compete with European airlines on international flights, denting the competitiveness of EU and US carriers, which have complained about unfair subsidies from Middle Eastern states.

France and Germany complained about the situation, saying “European airlines are losing market share against the Gulf companies, because of their unfair competitive practices, and in particular because of the significant public subsidies and guarantees they enjoy.”

Paris and Berlin called on the European Commission to end such practices by adopting a common strategy on controlling foreign airlines’ operations with traffic rights in the EU.