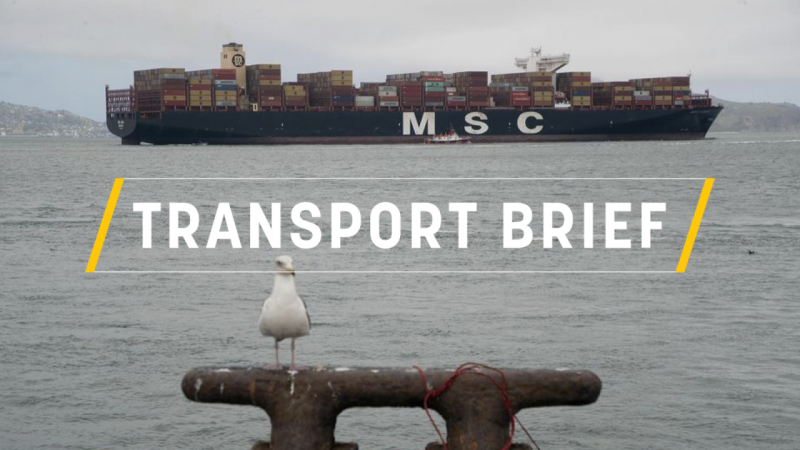 Your weekly dose of everything transport [Photo: EFE-EPA]

In this week’s edition: plenty of developments in the car passenger market, Airbus and Boeing up to old and new tricks, and rail services struggle across Europe. First, the latest vlog: a Halloween special and a look at the Commission’s worst nightmare. Spooky stuff!

The European Investment Bank was urged to withdraw a €264m loan that Germany is spending on building a new stretch of autobahn. Activists have warned that it risks harming the local habitat and drinking water. Details here.

Data and transport are rapidly becoming more intertwined with one another, as service providers look to leverage digitalisation to lower costs and their carbon footprint. Check out our special reporting on where the big challenges lie.

Bulgaria, Lithuania and Poland are among the countries challenging EU mobility package rules at the court of justice. Here is some background on the issue. The Council signed off on relaxed pandemic-linked rules for the freight sector.

Hybrid-powered trucks will be needed to meet the EU’s heavy-duty transport CO2 target for 2025, a new study says. It touts the advantages of using an electric motor in urban areas and switching to combustion power for motorway travel.

FIAT-Chrysler and Peugeot’s planned merger is still on track and could be approved by competition regulators soon, sources say. The Commission identified possible problems in the van sector but both companies are willing to make concessions.

Renault, meanwhile, said it will stop investing in new diesel tech developments and focus on e-mobility. A UK minister said that Britain will “be at least as ambitious as the EU” when it comes to emissions standards.

Eight electric buses were deployed to the streets of Batumi, Georgia. Purchased with help from the EBRD, it is a first for the region.

Milan suspended its low-emissions zone due to the pandemic and reintroduced it earlier this month. Last week, as cases surged again, it was suspended once more. In Berlin, police were filmed stopping cyclists and telling them to wear masks.

Aircraft cabin air quality could soon improve if the EU adopts new safety measures. On most planes, air is pressurised in the engines and then pumped into the plane, which can be contaminated with dangerous fumes. The new standard aims to lower the risk.

Finnair will cut 700 jobs as pandemic-related disruption hampers business. The national airline held talks with trade unions about the losses and will extend furlough schemes for other workers.

Boeing is thinking about launching a new plane – always a big milestone in the aviation industry – that would target the single-aisle market, while Airbus delivered its first aircraft from its US-based assembly plant.

Airbus also launched the third edition of its super-sized Beluga transport plane. In Singapore, one of the grounded A380 jumbos has been converted into a restaurant. You can read the review here.

The World Trade Organisation gave final confirmation that the EU can slap tariffs on US imports as part of the ongoing Airbus-Boeing subsidies dispute.

Japanese airline ANA announced that it will start flying planes with sustainable aviation fuel (SAF), marking a first for flights in Japan. Microsoft also said it is teaming up with Alaska Airlines on SAF, in a bid to hit a carbon-neutrality target.

Berlin’s Brandenburg Airport is finally going to open its doors this week, over budget and over deadline. Neighbouring airport Tegel will shut up shop as a result. Read an obituary of sorts for the hub here.

Eurostar ran a first direct service between Amsterdam and London. New passport gates in the Dutch capital means there is no need for a stop in Brussels. But there was little fanfare, as virus measures meant the train was mostly empty.

The Council signed off on a recently-brokered deal on rail passenger rights reform. MEPs on the transport committee now need to give their approval before the update can take effect. More details here.

Part of the review was aimed at making sure there is more space on trains for bicycles. In Scotland, a rail operator unveiled five new carriages that have room for 20 bikes, including tandems and e-bikes.

French rail operator SNCF came in for huge criticism from passenger groups and politicians after deciding to suspend high-speed services from parts of north France into Paris, due to the health crisis.

The Welsh government will nationalise rail services from February in order to keep trains running, after the virus substantially cut passenger numbers.

High Speed 1 – the UK rail line that links London with the Channel Tunnel – will be the first in the country to be powered completely by renewable power. Clean energy is expected to reach 100% by 2022.

Election day in the US looms large. Joe Biden wants to ramp up train networks if elected; operator Amtrak has circulated this map of expanded services across the entire country, which would cost a reported $25 billion to deploy.

And in Bulgaria, the railway operator held 13 trains at stations during the lost hour early Sunday morning, so as not to violate timetables. The firm said it is “common practice” to keep rains waiting for an hour but we are not so sure….

Norway will build a ship powered by green hydrogen, using €8 million in EU funding. The project aims to develop hydrogen bunkers along the Norwegian coast and to use the vessel to deliver clean fuel to those points.

Russian intelligence stands accused of bringing down the IT infrastructure of Maersk, the world’s largest shipping firm. The hack three years ago cost the Danish giant hundreds of millions in lost revenue.

The International Maritime Organisation agreed to put faith in engine efficiency standards to cut greenhouse gas output, a move that has been widely denounced by climate groups and could yet boost EU efforts to regulate the sector more strictly.

NASA teased a big announcement about the moon and then after the weekend passed, revealed that a flying telescope – mounted on a 747 jet – had detected water up on the lunar surface. It could help future space missions.

Just because astronauts are 400 kilometres above the surface of the Earth, does not mean they cannot exercise their democratic rights. Kate Rubins voted in a specially-made booth aboard the ISS. Check out the picture below.

No clues as to who astronaut Kate Rubins voted for but here she is doing it. 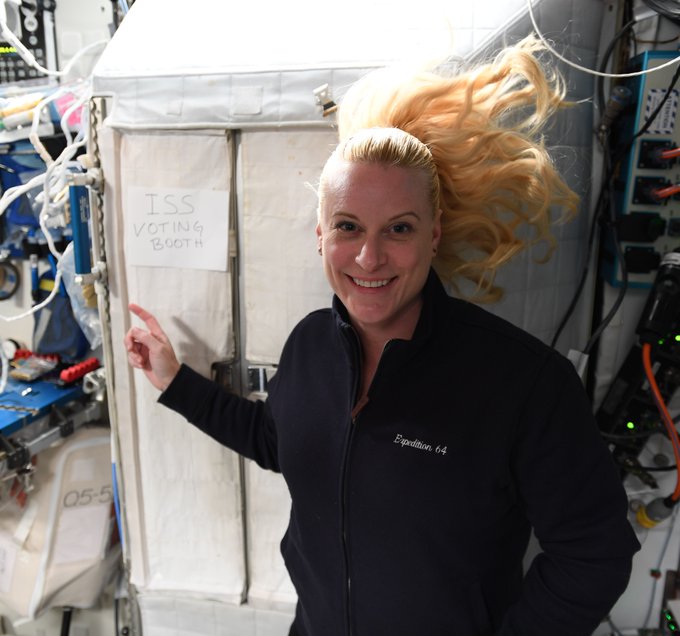 Berlin’s new (?) airport opens for business on 31 October, aka Halloween.