Transport workers and truck drivers gathered at the Schuman roundabout in Brussels on 3 December 2018 to protest against social dumping and unfair competition in road transport. [Alexandros Michailidis/Shutterstock]

Rossen Zhelyazkov’s comments came just two days before a large-scale protest of truck drivers from Bulgaria and other countries on Thursday (January 10) in Brussels.

The protest will be held on the same day the European Parliament’s transport committee will decide whether to sign off on the EU’s Mobility Package, dubbed by some as the ‘Macron law’, which eastern EU members complain puts them in a disadvantaged position compared to their western peers. 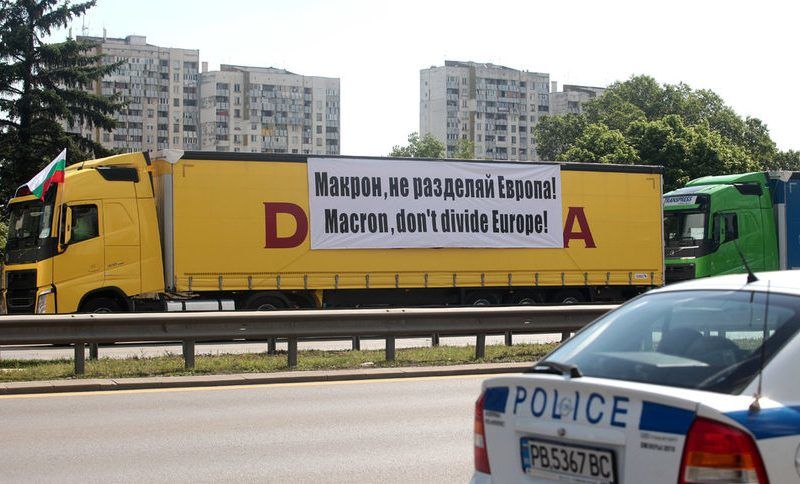 Among the controversial reforms in the package is a compulsory return of drivers to their country of origin for their monthly rest. The last word on the package belongs to the  European Parliament, which in July 2018 failed to reach an agreement on all the changes and sent the issue back to the committee.

“At the moment, there is a division between the Central European and the periphery countries and that’s why our demands are supported by countries such as Finland, Lithuania, Latvia, Estonia, Portugal, etc.,” Zhelyazkov said.

The Bulgarian government has supported the hauliers’ demands.

According to Prime Minister Boyko Borissov, if the package is accepted without the corrections demanded by the truck drivers, Bulgaria and other countries will lose much of their economic potential, its gross domestic product will suffer and carriers will be forced to move their business elsewhere.

The protest will be held at Place du Luxembourg, opposite the Parliament building, and according to Bulgarian truck drivers, will also be attended by hauliers from Poland, Lithuania, Romania and Hungary.

In December, Zhelyazkov said the government had prepared a proposal for a change in the package that will be put forward by Bulgarian MEPs.

He added that Bulgaria insists on postponing the implementation of the texts related to the ban on weekly rest in the vehicles until the proper infrastructure to ensure the safety of drivers and trucks is in place.

The minister pointed out that on the other important topic, the return of drivers every four weeks, the texts are inappropriate and unfair. He said they violate the fundamental right guaranteeing EU citizens the right to choose where to spend their free time. For these reasons, Bulgaria will insist on introducing clarity in these principles.

Drivers from Bulgaria, where average monthly wages are among the lowest in the EU, often spend weeks moving between European countries, before returning home.